We’re 17 days removed from the first presidential debate, 14 days removed from President Donald Trump’s coronavirus diagnosis, and 18 days away from November 3rd. It might feel like a year, but it’s only been two weeks — and following the fallout of these campaign-shaking events, Joe Biden finds himself ahead by double digits.

In an average of the 46 most recent national polls, the former vice president led President Trump by 10.2 points (51.6 percent to 41.4 percent).

Considering Biden entered the month of October leading by approximately 7.5 points, there’s little question that his advantage has since grown. The exact reason for this movement, though, is harder to pin down, in no small part because of so many major news stories breaking back-to-back-to-back.

But whatever the cause, it helps to evaluate Biden’s standing in the broader context. His current edge is not only a high point for this particular campaign; it’s one of the most dominant performances of any challenger in the history of presidential election polling.

For starters, consider Biden’s topline margin of 10.2 points. This is inarguably his largest lead since June, when early-summer unrest dampened Trump’s standing nationwide.

But even then, Biden struggled to reach 50 percent in many polls: his June support hovered near 48 percent in the Snapshot averages. This time, by contrast, he’s garnering a majority more often than not. Out of 28 national surveys conducted entirely after the president tested positive for coronavirus on October 2nd, Biden earned at least 50 percent in 24 of those polls. And in 12 of those 28 surveys, his margin over Trump was at least 11 points.

This dynamic is starkly different from 2016. At this point four years ago, Hillary Clinton did lead Donald Trump, but by only six points. Moreover, her average support was just 45 percent, and the toplines throughout the 2016 election jittered much more than those in 2020.

Turning back the clock further, it’s difficult to find an example of a challenger polling this well for this long. Perhaps the closest comparison is 1992. Challenger Bill Clinton was ahead of incumbent George H.W. Bush by 10 points in mid-October of that year, although Clinton’s lead then wasn’t nearly as stable as Biden’s lead is today.

In short: if the polls are correct, Biden could end up winning well over 330 votes in the Electoral College when all is said and done. The president’s current deficit is quite literally historic, and turning that around in fewer than three weeks will be a tall order. 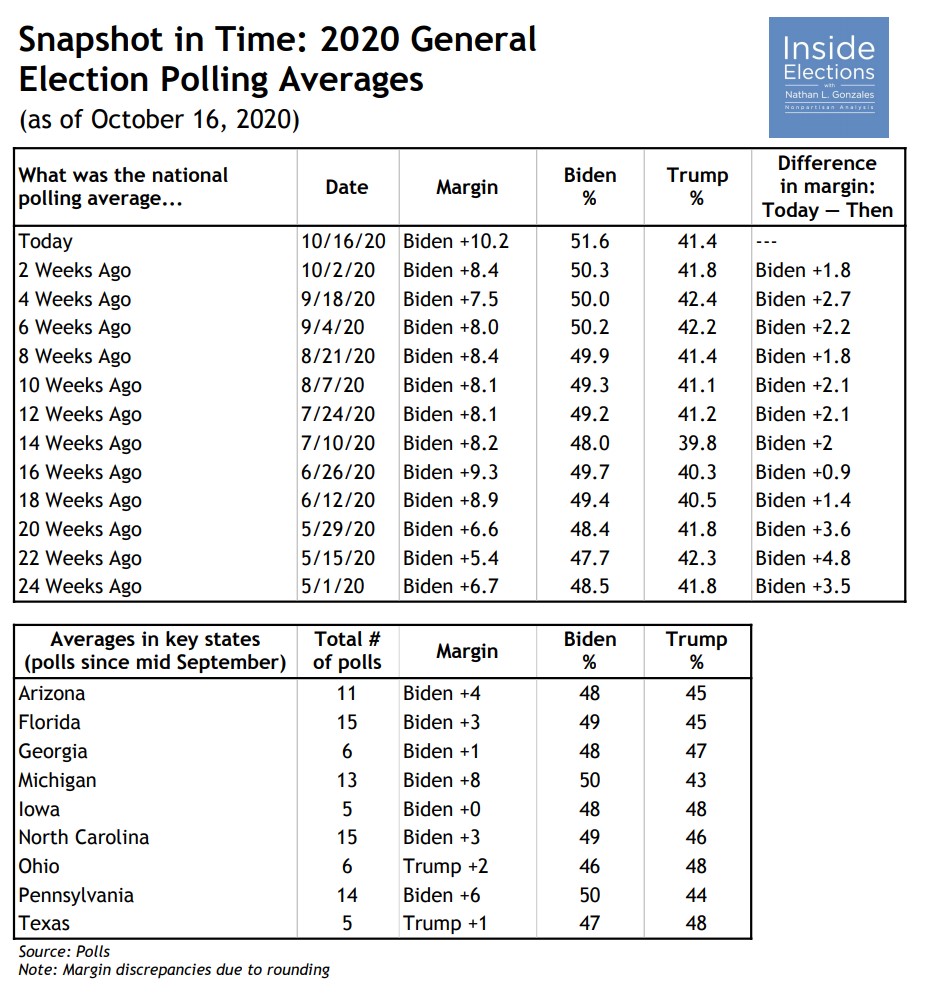 States
Whereas the national polling average has clearly moved in favor of Joe Biden throughout October, the same has not necessarily been true at the state level. In fact, battleground polling remained relatively steady over the past two weeks, possibly indicating a slight split between national surveys and state surveys.

Here’s an example: national polls showing Biden ahead by 12 points, such as one this week from ABC News/The Washington Post, would suggest a 10-point improvement from Hillary Clinton’s performance four years ago, given that she won the national popular vote by approximately 2 points. But a Monmouth University poll of North Carolina, which was in the field at the same time as the nationwide ABC/Washington Post survey, found Biden leading by 4 points — only a 7-point improvement compared to Clinton’s 3-point loss in North Carolina in 2016.

In all fairness, one-off instances like the example above are prime opportunities to craft a narrative using cherry-picked data. Still, taken in the aggregate and applying a uniform shift, certain battleground polls point to a Biden lead closer to 7 or 8 points nationwide, as opposed to 9 or 10 points. As Nate Cohn noted in his Monday column for The New York Times Upshot, however, there’s evidence that the national polls and state polls are beginning to converge once again.

Regardless of whether this split was a blip — and regardless of whether Biden’s true national advantage is 7 points or 11 points — Donald Trump still trails in virtually every battleground state. And based on the current Snapshot averages, it would require an uncharacteristically large, and systematic, polling error to push the president ahead.

In Arizona, the most recent live-caller surveys are among Biden’s best in the state all year, but the overall average is a tad tighter. While Siena College/NYT found Biden +8 and Monmouth University measured Biden +7, a Snapshot of the eleven latest polls showed Biden leading by 3.6 points (48.5 percent to 44.8 percent). The margin one week ago was Biden +2.9, whereas two weeks ago saw Biden +3.5 and four weeks ago found Biden +4.2. Rating: Tilt Democratic.

Biden’s advantage in Florida has also stayed steady over the past month. Quinnipiac University recorded Biden +11, an obvious outlier, whereas a Siena College/NYT poll of Biden +5 fell closer to the aggregate. Across 15 polls, Biden led by an average of 3.4 points (48.6 percent to 45.2 percent). One week ago, Biden was up by 4 points, compared to Biden +4 two weeks ago and Biden +1.9 four weeks ago. Tilt Democratic.

In Michigan, polls have remained similarly consistent. Siena College/NYT found Biden +8. More broadly, an average of 13 polls over the past two weeks placed Biden ahead by 7.5 points (50.2 percent to 42.6 percent). One week ago, he was up by 7.3 points; two weeks ago, Biden’s lead was 6.1 points; four weeks ago, his lead was 7.4 points. Lean Democratic.

North Carolina has received a high number of polls over the past few weeks, and while some of those surveys are more reliable than others, all suggest a Biden advantage. Monmouth University and Siena College/NYT both found Biden +4, which is close to the overall aggregate. In the latest Snapshot, Biden led by an average of 3.3 points across the 13 newest surveys (48.8 percent to 45.5 percent). His advantage was 3.3 points one week ago, 2.1 points two weeks ago, and 1.6 points four weeks ago. Toss Up.

Like many other competitive states, Biden’s average lead in Wisconsin has stayed steady. Siena College/NYT found Biden +10 and Marquette University Law School found Biden +5. The latest Snapshot across 11 surveys landed right between the goalposts, resulting in Biden +7.1 (50.4 percent to 43.3 percent). That margin was Biden +6.5 one week ago, Biden +6 two weeks ago, and Biden +6.7 four weeks ago. Move to Lean Democratic.

As November 3rd quickly approaches, live-caller polls from other potential battlegrounds are also beginning to come at a higher rate. Relative to where President Trump found himself four years ago, though, these toplines are certainly more rosy for his challenger.

While Iowa has unfortunately received the fewest polls of any state rated Toss Up or Tilt by Inside Elections, the available data suggests a close contest. For instance, Quinnipiac University found Biden +5. The Snapshot aggregate is even slimmer, with the five latest polls averaging to a Biden “lead” of 0.1 points (47.6 percent to 47.5 percent). One week ago the race was tied, two weeks ago it was Trump +0.8, and four weeks ago it was Trump +3. Move to Toss-up.

In Ohio, Quinnipiac University and Siena College/NYT both found Biden +1. An average of the six latest polls placed Trump ahead by 1.8 points (47.6 percent to 45.8 percent). The president’s advantage was 2.1 points one week ago, 0.7 points two weeks ago, and 2 points four weeks ago. Move to Toss Up.

In Texas, a Snapshot of the five polls conducted over the last two weeks showed Trump +1.2 (48.4 percent to 47.2 percent). The average one week ago was Trump +1.6, whereas two weeks ago saw Trump +2.1 and four weeks ago found Trump +4. Tilt Republican.

And in Georgia, Quinnipiac University found Biden +7. But this result might be an outlier given the overall average: the six latest polls found Biden +1 (47.7 percent to 48.7 percent). One week ago, the Snapshot showed Biden +0.7, compared to Biden +0.7 two weeks ago and Biden +0.6 four weeks ago. Notably, the margin in Georgia has stayed narrow throughout most of the general election cycle, with the “leader” frequently changing hands. Toss Up.

This story first appeared in InsideElections.com on October 16, 2020.