The race for the Oval Office remains steady — although a case could be made that there’s been slight tightening in favor of the president.

Based on the pattern in these margins, it appears each candidate enjoyed a boost from their respective convention, and while President Trump’s bump was slightly larger, both bounces were tiny by historical standards. This narrative, of course, is nothing new — but now that we’re three weeks removed from the conventions, there’s even more evidence to support it.

One way to measure poll volatility is by looking at the standard deviation of the candidates’ topline support: how narrow (or wide) were the ranges of Biden’s and Trump’s poll numbers, relative to their means, over a span of time? Using daily Snapshot averages dating back to the day before the Democratic National Convention, it’s possible to figure this out.

Between August 17 and September 18, the standard deviation of Biden’s average support was 0.31 points, which is smaller than Trump’s standard deviation of 0.59 points. Importantly, while this difference in spread is statistically significant, it doesn’t necessarily tell us the direction of that movement, only the magnitude.

Recent live telephone polling of likely voters can fill in the gaps: Fox News found Biden +5 and Monmouth University had Biden +7. President Trump performed better compared to the previous national surveys from Fox and Monmouth, but those gains still fell within the margins of error for both, making their toplines alone inconclusive.

Nevertheless, after taking all these numbers into consideration together, one could persuasively argue that Trump’s standing improved by at least one point. But even with that boost, the president still trails his challenger by the widest margin of any incumbent since 1992. So with Election Day just six weeks away, the question remains — will this improvement be enough? 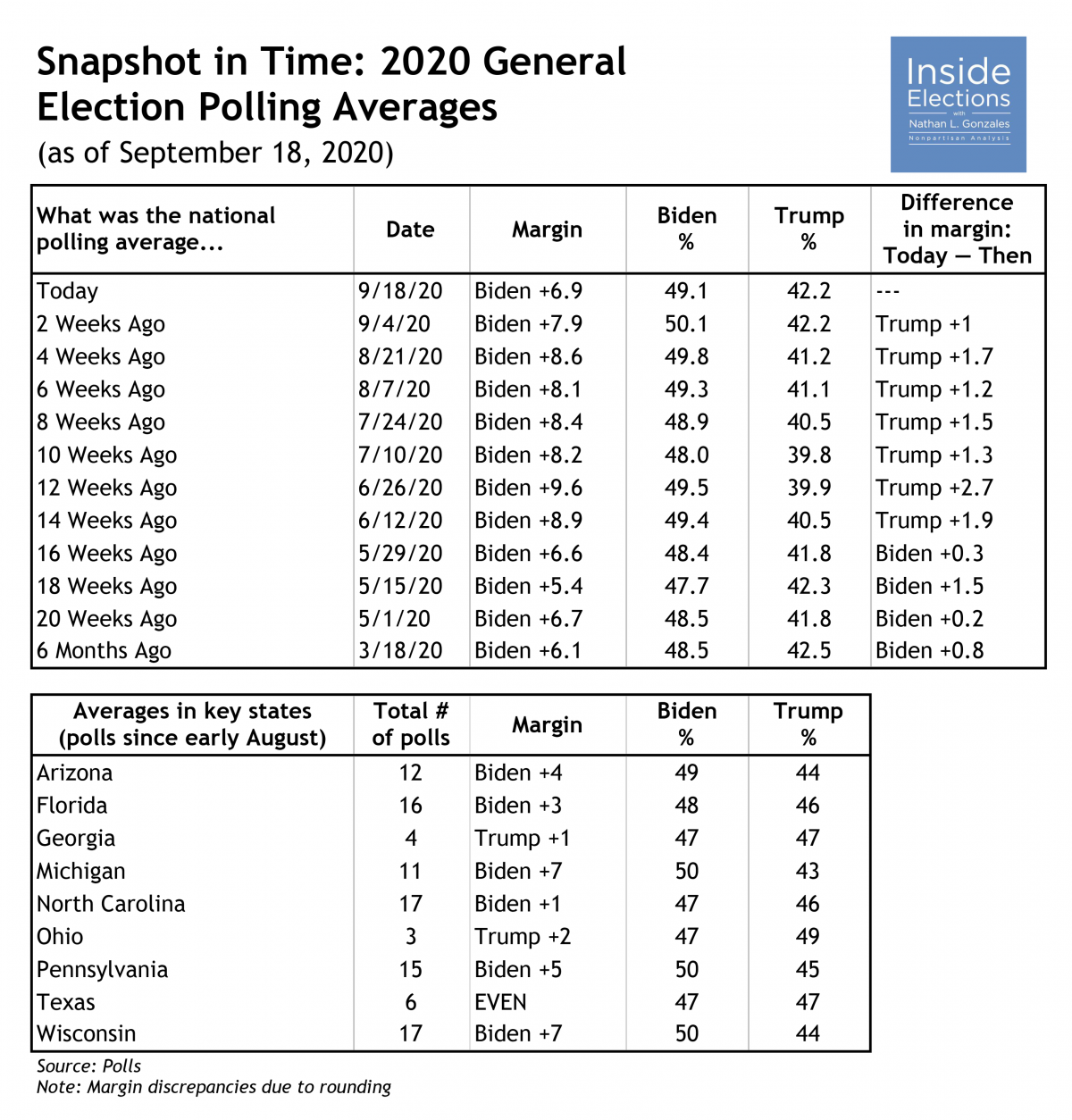 States
As for the key battlegrounds, a healthy amount of high-quality state polling was released over the past 14 days, hopefully providing a clearer view of where the Electoral College currently stands.

In Arizona, Monmouth University found Biden and Trump tied at 47 percent in their lower-turnout likely voter model, while Siena College/NYT placed Biden +9. An average of the 12 latest polls showed Biden ahead by 4.4 points (48.5 percent to 44.1 percent). The aggregate four weeks ago saw Biden +4.2, whereas eight weeks ago had Biden +3.9 and 12 weeks ago found Biden +3.2. Rating: Tilt Democratic.

Florida’s competitiveness is once again being hotly discussed, due in part to new post-convention surveys. Marist College found the race tied among likely voters, and Monmouth University recorded a Biden lead of 3 points in its lower-turnout likely voter model. The Snapshot average has narrowed accordingly, albeit still finding an edge for the former vice president: across 16 polls, Biden led by an average of 2.6 points (48.4 percent to 45.9 percent). Four weeks ago, Biden was up by 4.1 points, compared to Biden +5.4 eight weeks ago and Biden +6.4 twelve weeks ago. Rating: Tilt Democratic.

In Michigan, an average of eleven polls over the past month placed Biden ahead by 6.7 points (49.5 percent to 42.8 percent). Four weeks ago, he was up by 7.1 points; eight weeks ago, Biden’s lead was 9 points; 12 weeks ago, his advantage was 10.5 points. But while the Snapshot suggests a tightened race in Michigan, it should be noted that the state has not received much high-quality polling as of late. Lean Democratic.

Similar to the last four presidential elections, polling indicates North Carolina is shaping up to produce a thin margin in November. For example, among likely voters, Siena College/NYT placed Biden ahead by 1 point, CNN/SSRS found Biden ahead by 3 points and Suffolk University found Biden ahead by 4 points . In the broader Snapshot, Biden led by an average of 1.1 points across the 17 newest surveys (47.4 percent to 46.3 percent). Biden’s advantage was 1.8 points four weeks ago, 2.7 points eight weeks ago, and 1.5 points 12 weeks ago. Toss Up.

A live telephone poll of Pennsylvania also placed Biden above his overall average: Marist College found likely voters preferring Biden by 9 points, while an aggregate of 15 polls had him up by 5 points (49.6 percent to 44.6 percent). Four weeks ago, the gap was Biden +5.9; eight weeks ago, Biden +5.9; twelve weeks ago, Biden +6. Lean Democratic.

Pivotal states won by Trump in 2016 are also receiving a steady influx of new polls, placing the president below his benchmarks four years ago. In Georgia, currently rated Toss Up, the current Snapshot average across four polls is Trump +0.5 (47 percent to 46.5 percent). In Ohio, rated Tilt Republican, a three-poll average found Trump +2 (49 percent to 47 percent). And in the six newest polls of Texas, also rated Tilt Republican, both candidates were tied at 47 percent. Notably, the margins in these three states remained steady throughout the summer and into Labor Day. Let’s see what happens in the home stretch.

This story first appeared in InsideElections.com on September 18, 2020.