The conventions are over and the polls are trickling in: as of right now, there doesn’t appear to be much of a bounce for either now-official nominee.

Compared to the pre-convention numbers, this gap is virtually unchanged. On August 16, the day before the Democratic National Convention, Biden’s average advantage was 8.5 points. Exactly one week later, just before the Republicans kicked off their own convention, his lead was 8.6 points. This steadiness should not come as a surprise to regular readers, though, because polls have stayed in the 8-point range since early July.

Of course, margins alone don’t capture the full Snapshot. But consider this: Biden’s average support has consistently hovered around 50 percent throughout the summer. By contrast, Hillary Clinton’s numbers were approximately 6 points lower at this point in 2016 — although she ran ahead of Trump in the overall margin, her topline support was only 44 percent.

That’s not to say that a Biden win in November will be a sure thing. But it does mean his lead today seems markedly more comfortable than Clinton’s advantage four years ago, at least based on polling. And the fact of the matter is, an 8-point deficit heading into Labor Day should be worrying for any incumbent president. Just ask George H.W. Bush.

So while a lot can happen between now and November — there are certainly enough major news stories to capture the electorate’s attention — Trump currently finds himself in an unfavorable position, especially if his convention-week viewers fail to translate to Election-Day voters. Put simply, unless something significant happens over the next two months, the president might be running out of chances to turn this campaign around. 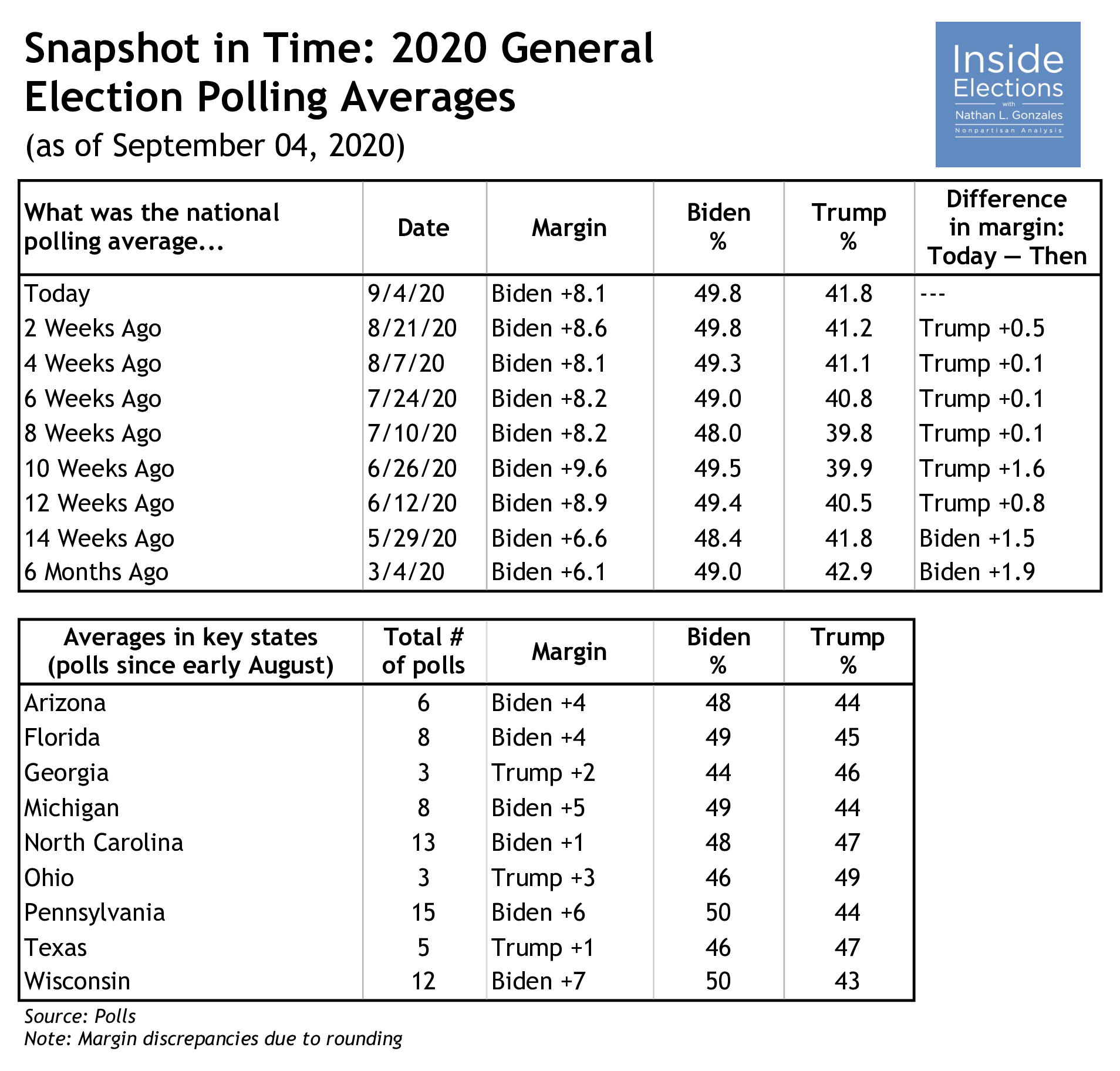 States
Much like the national landscape, the margins in major battlegrounds are largely similar to where they were two weeks ago. That said, Trump might breathe a sigh of relief after seeing some of these numbers, as this latest batch of state polls contains a few favorable toplines for the incumbent president.

But even with this possible (and slight) recent tightening in certain states, it’s impossible to predict whether or not the pattern will hold — or if this movement is even real at all. Because many pollsters chose not to field surveys during the conventions, most of the newest state data comes from partisan sources. So keep those grains of salt handy — after all, Snapshot averages are just one of many factors analyzed to produce the Inside Elections electoral college ratings.

In Arizona, the latest average of six polls showed Biden ahead by 4.3 points (48 percent to 43.7 percent). Relative to previous benchmarks, the aggregate four weeks ago found Biden +4.7, while eight weeks ago had Biden +2.6 and 12 weeks ago saw Biden +2.3. Tilt Democratic..

The Snapshot for Florida also recorded minimal movement. Across eight polls, Biden led by an average of 3.8 points (48.6 percent to 44.9 percent). Four weeks ago, Biden was up by 5.7 points, compared to Biden +6.4 eight weeks ago and Biden +3.8 twelve weeks ago. Tilt Democratic.

Michigan’s numbers reveal one of the largest shifts in any state, with eight polls averaging Biden +4.6 (48.9 percent to 44.3 percent). Again though, it’s crucial to consider this topline in the aggregate by comparing it to previous numbers — the last major telephone poll of Michigan was released in late July. As for the Snapshot averages: four weeks ago, Biden was ahead by 8.7 points; eight weeks ago, Biden’s lead was 9.6 points; 12 weeks ago, his advantage was 9.3 points. Lean Democratic.

North Carolina is another battleground where the most recent surveys moved the margin slightly in favor of the president — Biden led by an average of 0.8 points across the 13 newest polls (47.7 percent to 46.9 percent). For context, Biden’s advantage was 3 points four weeks ago, 2.7 points eight weeks ago, and 0.2 points 12 weeks ago. Toss Up.

Pennsylvania continues to be a strong state for Biden, with an aggregate of 15 polls showing the former vice president ahead by 5.6 points (49.7 percent to 44.1 percent). Four weeks ago, the gap was Biden +5.9; eight weeks ago, Biden +6.5; twelve weeks ago, Biden +6.2. Lean Democratic.

In Texas, a five-poll collection found the president ahead by an average of 1.2 points (47 percent to 45.8 percent). Four weeks ago, Trump led by 0.8 points; eight weeks ago, both candidates were tied at 46 percent; and 12 weeks ago, Trump was ahead by 2.7 points. Tilt Republican.

Wisconsin’s polls suggest as steady a race as ever — the latest Snapshot estimate across twelve surveys was Biden +7.1 (50.1 percent to 43 percent). Looking back, the margin was Biden +8.5 four weeks ago, Biden +8 eight weeks ago, and Biden +7 twelve weeks ago. Tilt Democratic.

But with a deluge of high-quality surveys expected to come out over the next week, hopefully today’s grainy picture can be updated with a clearer image soon.

This story first appeared in InsideElections.com on September 4, 2020.