Virginia Baseline by District Highlights Democratic Strength in the House

In 2018, Virginia was a crucial state in the battle for the House. Similar to their gains nationwide, Democrats flipped three suburban Republican-held districts: the 2nd, 7th, and 10th. Virginia will continue to play an important role in 2020 House elections, with competitive races in the 2nd, 5th, and 7th Districts.

One of Inside Elections’ key statistics for analyzing districts is Baseline, which captures a state or congressional district’s political performance by combining all federal and state election results over the past four election cycles into a single average.

After the midterms, we rolled out Baseline at the state-level for all 50 states. But Baseline can also be calculated for individual congressional districts. We are excited to start rolling out Baseline statistics at the district level, and after kicking things off with Texas, we are releasing Baseline by district for Virginia.

Competitive Districts
Four of Virginia’s districts have been competitive over the last decade, with Baselines of less than 10 percentage points in either direction.

The 10th District, based in the northern Virginia suburbs outside Washington D.C., was the first district to be called as a Democratic flip on election night 2018. Its Baseline is D+2.31, reflecting both its Republican-leaning past (Republicans carried the district in seven of 10 elections from 2012 through 2016) as well as its sharp turn to the left in the Donald Trump era (Democrats carried the district by double-digits in four of five elections in 2017 and 2018). The 10th District is one of the mostly highly-educated districts in the nation (about 57 percent of its adults have a bachelor’s degree or higher), which is a key reason why we currently rate it as Solid Democratic for the 2020 House elections.

The 2nd District is based in Virginia Beach and is a true swing district, with a Baseline of R+0.89. While it voted for Trump by 3 points in 2016, Democrat Elaine Luria flipped the seat in the 2018 midterm elections. This November, Rep. Luria is favored to keep her seat — we currently rate this district as Lean Democratic. 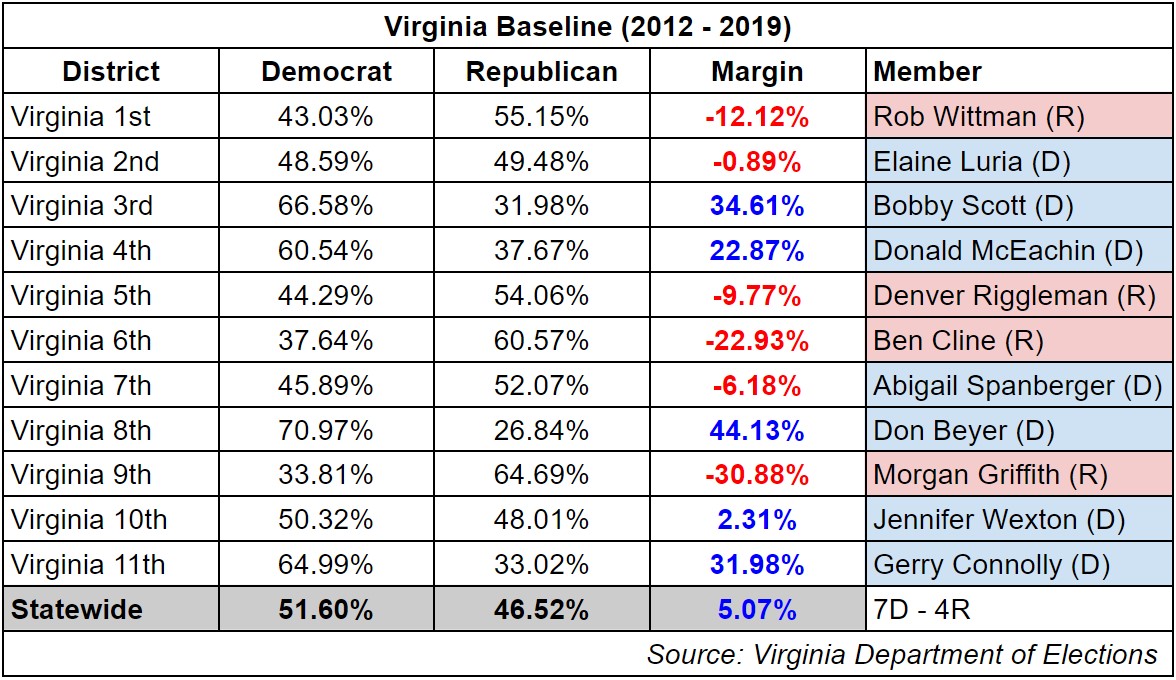 The 7th District is based in the Richmond suburbs and leans Republican, with a Baseline of R+6.18. Although Trump carried the district by 6 points in 2016 and Republicans carried the district in all three state executive elections in 2017, Democrat Abigail Spanberger flipped the seat by 2 points in 2018. Spanberger is the narrow favorite to hold her seat — we currently rate this district as Tilt Democratic. The fact that Democrats are favored in a Republican-leaning district like this one shows why they are such heavy favorites to maintain their House majority.

The 5th District, which includes Charlottesville and South-central Virginia, has a Baseline of R+9.77. Republicans have carried this district in every single statewide election this decade, but Democratic Sen. Tim Kaine only lost it by 2 points in 2018. A combination of factors (an open race, a strong Democratic nominee and a weak Republican one, and Trump’s underperformance at the top of the ballot) have made the 5th District competitive this year — and in this issue we’re changing our rating from Lean Republican to Tilt Republican.

Analyzing Virginia districts using Baseline shows why Democrats are strong favorites to maintain control of the House. They are virtually guaranteed to hold the Democratic-leaning 10th District, are favored to hold two districts with Republican Baselines (the 2nd and the 7th), and are competitive in the 5th District, which has a significant Republican lean.

This story first appeared in Inside Elections with Nathan L. Gonzales on October 16, 2020.