Whereas Biden and Trump have seemingly stayed locked into their current positions, Hillary Clinton and Trump found their poll numbers slippin', tumblin', sinkin', and fumblin' all throughout the campaign. In other words, the polls this year have been substantially less volatile. 2016 is not 2020.

The two elections differ in other ways, as well. For starters, the 2016 race featured a pair of candidates with historically low favorability ratings, which partially explained the larger-than-normal share of undecided and third-party voters. This year, by contrast, the proportion of undecideds has been cut in half, with Biden being viewed more favorably than both Clinton and Trump. This reduces one of the main sources of uncertainty in 2016, because the impact of a last-minute surge (as Trump enjoyed versus Clinton) is dampened. Assuming present polling patterns persist, there simply would be less ground for the president to theoretically gain.

A second distinction between 2016 and 2020 can be found beneath topline support. Among polls asking voters which candidate they trusted more to handle certain issues, Trump and Clinton often split, even when one had the momentum in the horse race. For instance, respondents preferred Trump on the economy, favored Clinton on health care, and were divided on many other problems such as gun policy and terrorism.

But in 2020, Trump trails Biden on practically every major issue: the president is down by 20 points on race relations and 10 points on the coronavirus. Even voters’ preferred candidate on the economy — which was by far Trump’s best-polling topic before the pandemic — falls within the margin of error across recent live telephone surveys.

These factors, and others, show a dynamic that's divergent from what we saw last time. 2016 was viewed as a hold-your-nose-and-swallow choice between two unpopular nominees; 2020 is a referendum on the one who won.

States
Another difference between 2016 and 2020? Four years ago, Hillary Clinton carried 20 states (plus the District of Columbia) against Donald Trump. Today, the newest battleground polls suggest Joe Biden might manage to win a handful of additional states — and with them, key electoral votes. 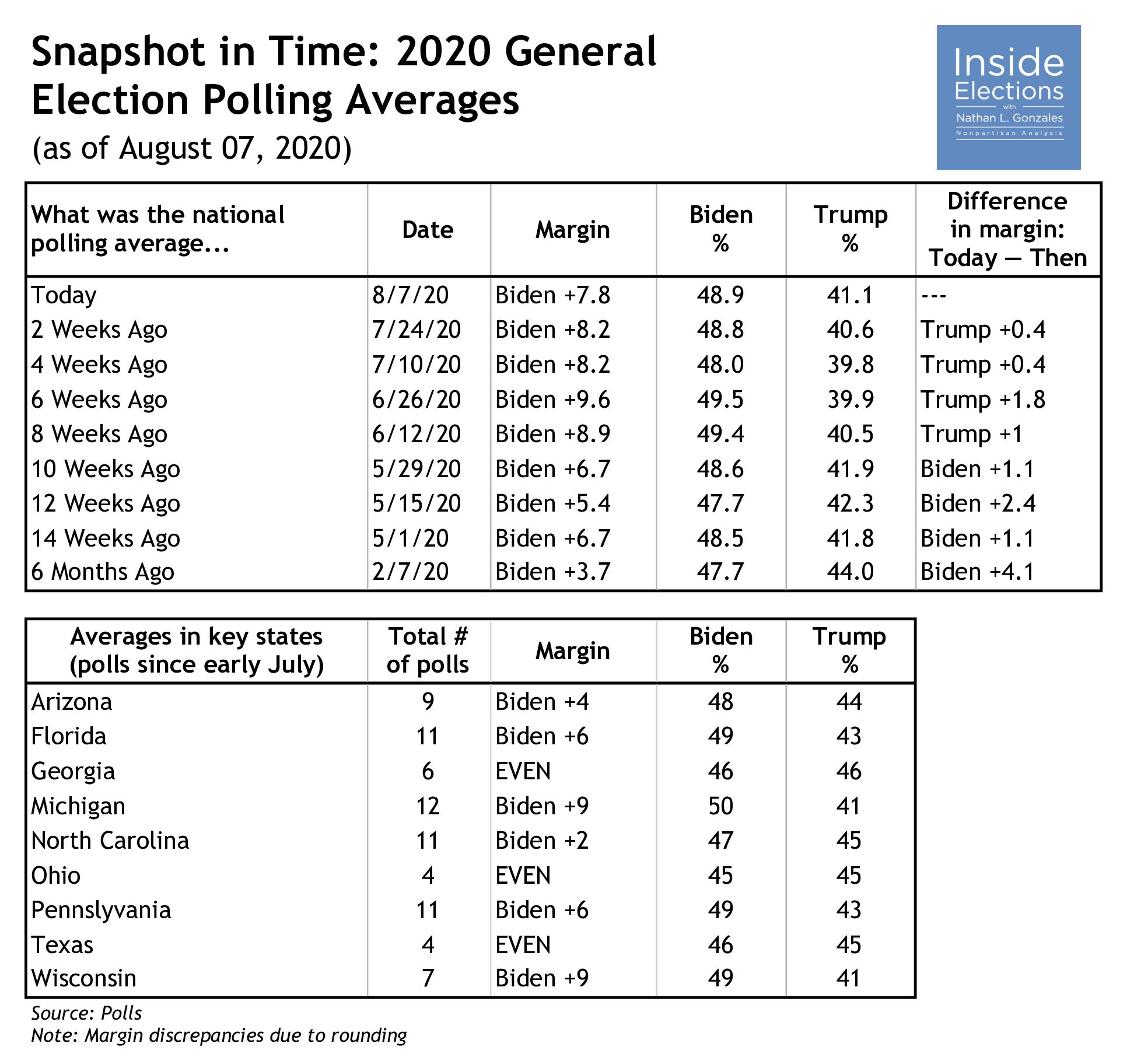 All fresh polls from Georgia suggest as tight a race as ever. Monmouth University found Trump and Biden tied at 47 percent each among registered voters. But three separate firms — Public Policy Polling (D), Morning Consult, and CBS/YouGov — all placed Biden ahead by 1 point. This competitiveness is further reflected in a one-month average of six polls, as both candidates were tied at 46 percent apiece. Toss-Up.

A few new Michigan surveys placed the former vice president ahead by double digits, but others found his lead to be more modest. Morning Consult saw Biden +10, while Biden +12 was measured in three separate releases from CNN/SSRS, Redfield & Wilton Strategies, and Hodas & Associates (R). Likewise, Change Research (D) saw Biden +4, and CBS/YouGov and Public Policy Polling (D) both found Biden +6. These differences are smoothed over in an aggregate of 12 polls since last month, because Biden led by an average of 9.1 points (50 percent to 40.9 percent). Lean Democratic.

Ohio, which had largely eluded pollsters until now, has fortunately seen a slew of new polls, together indicating a close contest. On the one hand, Morning Consult recorded Trump +3 and CBS/YouGov measured Trump +1. On the other hand, the University of Akron saw a different winner altogether, recording Biden +4. Across four polls released in the last month, Biden ran slightly “ahead” of Trump by an average of 0.5 points (45 percent to 44.5 percent). Tilt Republican.

Texas, a popular state for pollsters throughout the early summer, surprisingly saw scant surveys these past two weeks. Most recently, Morning Consult polled the state twice, measuring Biden leads of 1 point and 2 points. A one-month average of four surveys shows a razor-thin race as well, placing the former vice president “ahead” by 0.2 points (45.6 percent to 45.4 percent). With Biden’s campaign adding staffers in Texas earlier this week, this Tilt Republican state is likely to attract even more attention in the run-up to November.

This story first appeared in InsideElections.com on August 7, 2020.