In light of last night’s news about President Donald Trump and First Lady Melania Trump testing positive for the coronavirus, there’s no doubt that this election has already received an October surprise. Pair this development with Tuesday night’s rowdy presidential debate, and it’s easy to conjure up the narrative of a campaign turned on its head literally overnight.

But remember, this has been among the most stable presidential elections in recent history, despite occurring in a year of extraordinary circumstances. As a result, it’s practically impossible to know right now how these events will affect the polls. Here’s what we do know: Joe Biden enters this chaotic home stretch as the frontrunner.

In an average of 31 polls conducted over the past two weeks, the former vice president led President Trump by 7.5 points (49.8 percent to 42.2 percent). The margin between both candidates has stayed near 7 points throughout September and into October, following a slight convention bounce for the president.

As mentioned in the previous Snapshot, though, this bump for Trump is still small by historical standards. While the average convention bounce since 2000 has been worth approximately 2 points, the president’s gain this year was only half as much.

Likewise, history also suggests that the race might be largely unaltered as a result of the theatrics on Tuesday. Just like the dampened convention bounces, debate-related shifts this year could be similarly muted because of the coronavirus.

In an analysis for FiveThirtyEight conducted before the initial debate between Trump and Hillary Clinton in 2016, Harry Enten observed that first debates typically tend to have a minimal effect on the polls, moving the overall margin by an average of 1.8 points. Newer research earlier this week from G. Elliott Morris at The Economist suggested the same, concluding, “only rarely have the polls moved rapidly during the debate season.” 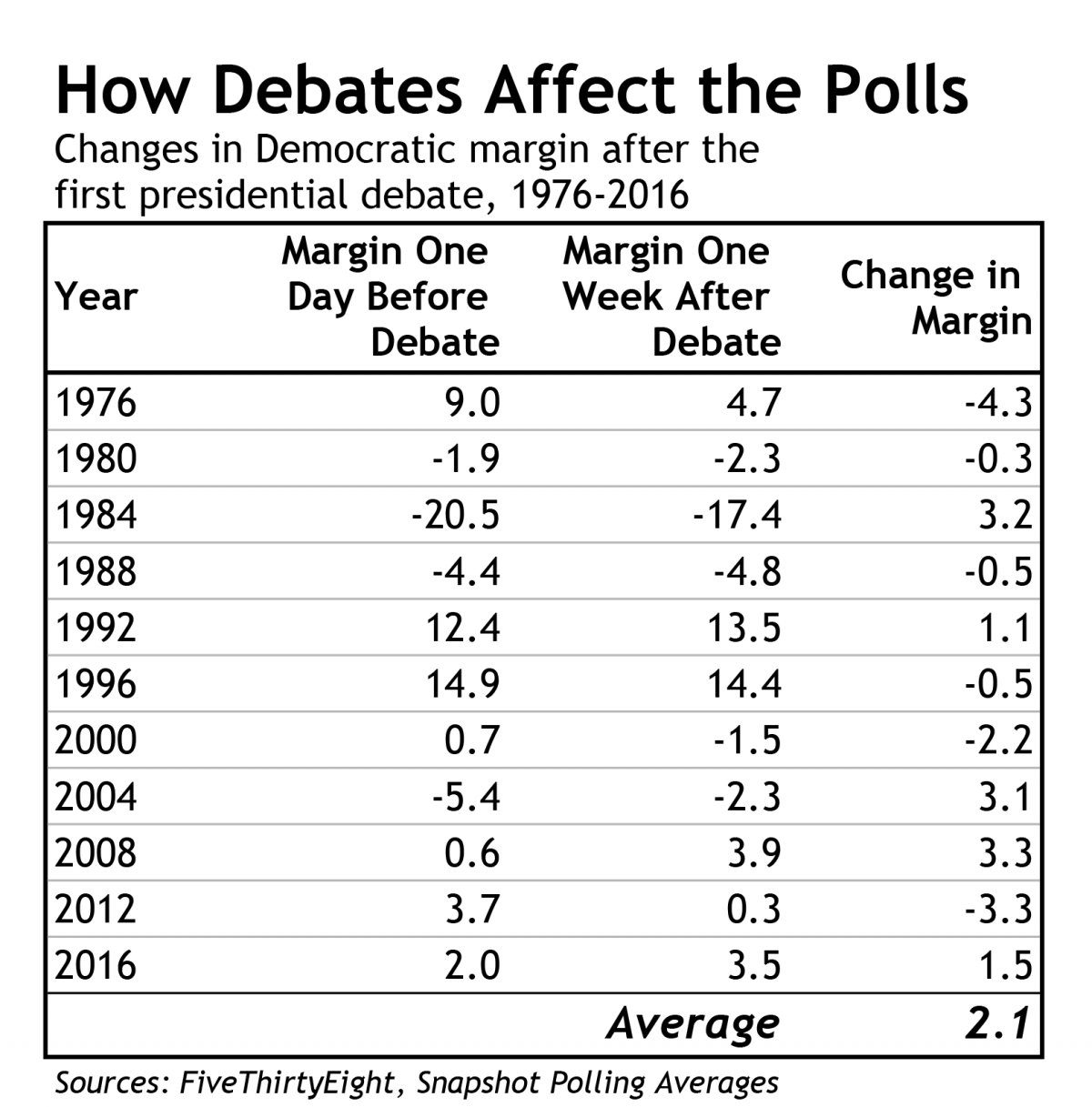 My own number crunching confirms this. Combining Snapshot averages with FiveThirtyEight’s historical polling averages dating back to 1976, I looked at every first debate’s short-term impact on the polls: from one day before the debate to seven days after the debate, how did the margin change?

Again, my results unsurprisingly fell in step with those from Enten and Morris — across the past eleven elections, polls moved by an average of 2.1 points in the week following the first presidential debate.

The findings from individual elections demonstrate how fickle these bounces can be.

On one end of the extreme, Gerald Ford cut into Jimmy Carter’s lead by 4 points in 1976, but it still wasn’t enough to secure Ford a full term in office; on the other end, George H.W. Bush’s advantage over Michael Dukakis remained virtually unchanged after the initial debate in 1988.

In fact, only once did the first presidential debate cause the polling leader to swap altogether: George W. Bush briefly overtook Al Gore thanks to a 2-point swing after the first debate in 2000, although Bush ultimately lost the popular vote just one month later.

Bearing this in mind, if the debate alone were to affect the polls, that potential movement is likely to be minimal, and it’s not guaranteed to be permanent. Any other details, including which candidate fared better — or if the president testing positive for coronavirus overshadows all else — will be difficult to pin down until fresh polling comes in. The one certainty is that the week following this year’s first debate will be unlike any other before it.

States
The stream of high-quality data from potential battlegrounds continues to flow, picking up by the day. Indeed, of the new surveys being released, state polls now outnumber national polls by a three-to-one margin — an encouraging pattern given that the Electoral College is obviously won at the state level. Together, these toplines show a consistent lead for the former vice president, albeit a bit smaller than where he found himself two months ago.

Out of the major battlegrounds with frequent polling, the race for Arizona’s 11 electoral votes has been among the most stable this cycle. ABC News/The Washington Post placed Trump ahead by 1 point among likely voters, one of his better recent polls in the state. A Snapshot of the 18 latest surveys showed Biden leading by 3.6 points (48.4 percent to 44.8 percent). The average four weeks ago saw Biden +3.9, whereas eight weeks ago had Biden +3.7 and 12 weeks ago found Biden +2.6. Rating: Tilt Democratic. 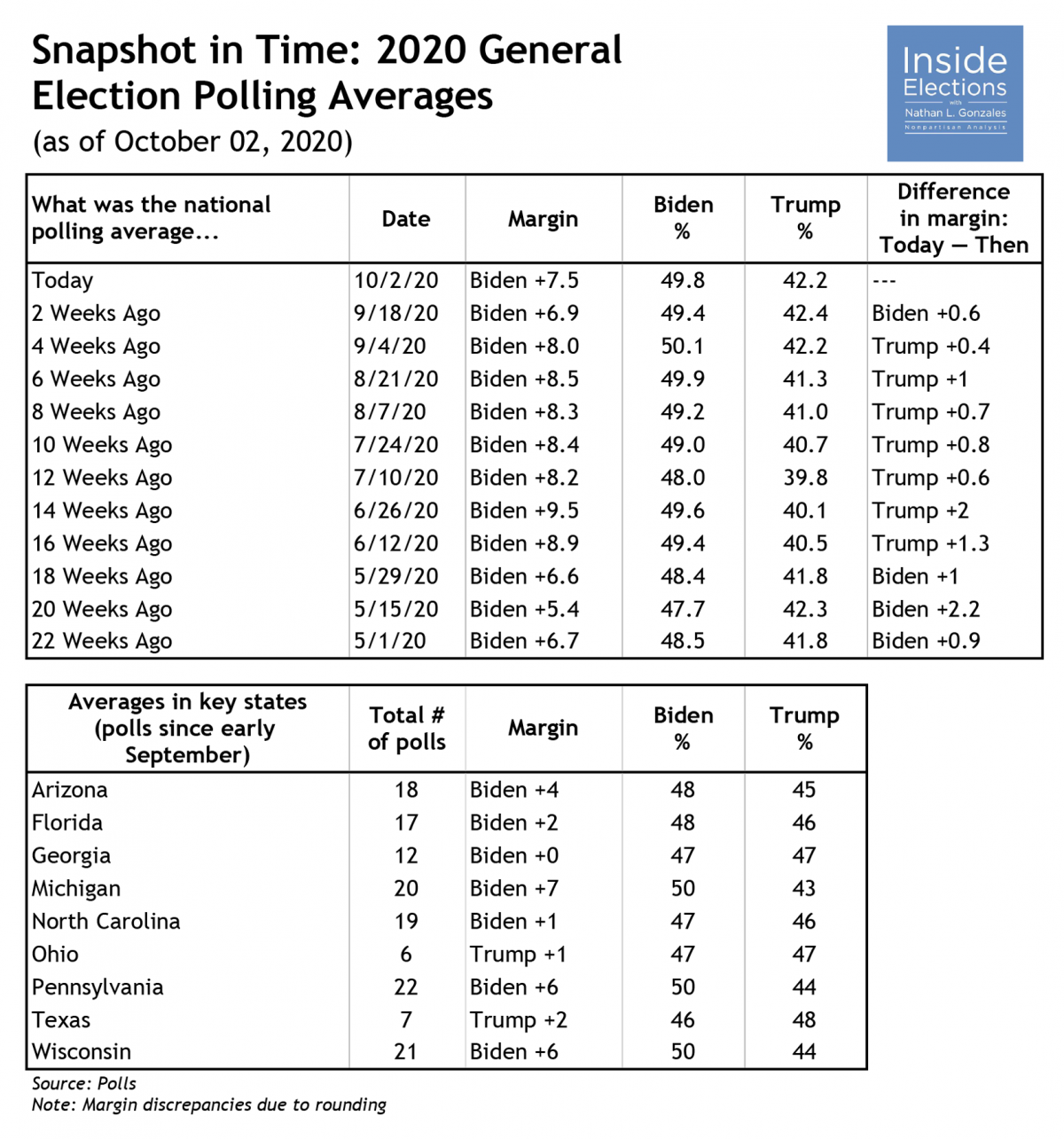 Florida, on the other hand, has become increasingly competitive in recent weeks. A likely voter poll from ABC News/The Washington Post found Trump leading by 4 points. But the average still finds the president trailing overall: across 17 polls, Biden led by an average of 1.8 points (48.1 percent to 46.4 percent). Four weeks ago, Biden was up by 3.4 points, compared to Biden +5.7 eight weeks ago and Biden +6.4 twelve weeks ago. Tilt Democratic.

In Michigan, fresh polling reaffirms how this has been among Biden’s best-performing battlegrounds, even if it has received comparatively little attention from live-caller pollsters. Bucking that drought, Marist College found the former vice president leading by 8 points among likely voters. More broadly, an average of 20 polls over the past month placed Biden ahead by 6.8 points (50 percent to 43.2 percent). Four weeks ago, he was up by 6.2 points; eight weeks ago, Biden’s lead was 8.2 points; 12 weeks ago, his lead was 9.5 points. Lean Democratic.

The margin in North Carolina has also slightly slimmed as of late, but that shouldn’t come as a surprise: polls have long painted a tight race here. In the latest Snapshot, Biden led by an average of 1 point across the 19 newest surveys (47.4 percent to 46.4 percent). For context, his advantage was 0.6 points four weeks ago, 3 points eight weeks ago, and 2.7 points 12 weeks ago. Toss Up.

Pennsylvania received a flurry of new surveys over the past two weeks, all showing strong advantages for Biden. Among likely voters, ABC News/The Washington Post and Siena College/NYT both found Biden +9, whereas Fox News saw Biden +8. An aggregate of 22 polls had him up by 5.5 points (49.9 percent to 44.4 percent). Four weeks ago, the gap was Biden +5.5; eight weeks ago, Biden +5.8; twelve weeks ago, Biden +6.3. Lean Democratic.

Wisconsin is another state where Biden’s lead has remained steady overall. Marist College found the former vice president up by 10 points among likely voters. The latest Snapshot average across 21 surveys found Biden +6.4 (50.2 percent to 43.9 percent). That margin was Biden +6.6 four weeks ago, Biden +8 eight weeks ago, and Biden +7.1 twelve weeks ago. Tilt Democratic.

A number of live-caller polls were released in other potentially close states as well, together showing the broad scope of the electoral map.

And in Georgia, Quinnipiac University found Biden +3, Siena College/NYT saw both candidates tied at 45 percent, and Monmouth University placed Trump +2 in their higher-turnout likely voter model. The latest Snapshot of 12 polls found Biden +0.5 (47 percent to 46.5 percent). These surveys help to underscore why Georgia has emerged as a top battleground this year. Toss Up.

This story first appeared in InsideElections.com on October 2, 2020.