Jacob Rubashkin is a reporter and analyst with Inside Elections, which provides nonpartisan analysis of campaigns for Senate, House, governor and president.

Jacob appears regularly on C-SPAN’s Washington Journal to discuss the battle for the House and Senate, and was a part of 2020 election week coverage on WUSA9, CBS’s Washington, DC affiliate. On election night in 2020, he worked on the decision desk at Edison Research, which provides results to ABC, NBC, CBS and CNN. He is currently a contributor at elections site FiveThirtyEight.

Jacob has been quoted on elections in major outlets including The New York Times, The Washington Post, The Wall Street Journal, the Associated Press, Fox News, and local outlets across the country.

Prior to joining Inside Elections, Jacob worked at NBC News in Washington, DC, where he did research and wrote for the Meet the Press blog, and produced MSNBC anchor and guest live-shots.

Jacob is a native of the DC area. He attended Cornell University in Ithaca, NY, where he was editor-in-chief of the independent student paper, The Cornell Daily Sun. 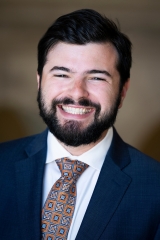