With a Democratic governor and a GOP-controlled legislature, redistricting in Wisconsin was destined to be settled by the court system — especially given how acrimonious the relationship is between Gov. Tony Evers and Republicans in Madison.

But most of the drama was taken out of the redistricting process several months ago when the Wisconsin Supreme Court said it would adhere to the “least changes” standard when selecting a new map — meaning a plan that deviated in the least significant way from the current map, which was drawn by Republicans in 2011.

That was good news for Republicans. Under the current map, President Donald Trump would have carried six of the eight districts in the Badger State in 2020, despite losing overall to Joe Biden by 0.6 points, 49.5-48.8 percent. The delegation is currently split 5R-3D, with one Trump-won district held by a Democrat (the retiring Ron Kind).

Ultimately, the court selected a “least changes” plan proposed by Evers, rather than the one put forth by GOP state legislators. While the new map still contains six districts carried by Trump, it differs from the GOP-favored plan by not making Kind’s district even less favorable to Democrats, and actually makes Republican Rep. Bryan Steil’s district slightly competitive.

Republicans have appealed to the U.S. Supreme Court to overturn that decision, but the high court has declined to involve itself in similar cases in North Carolina and Pennsylvania.

Given the favorable national winds for Republicans, the GOP stands to gain one seat in Wisconsin this cycle, but in better years for Democrats as many as two seats could become competitive. 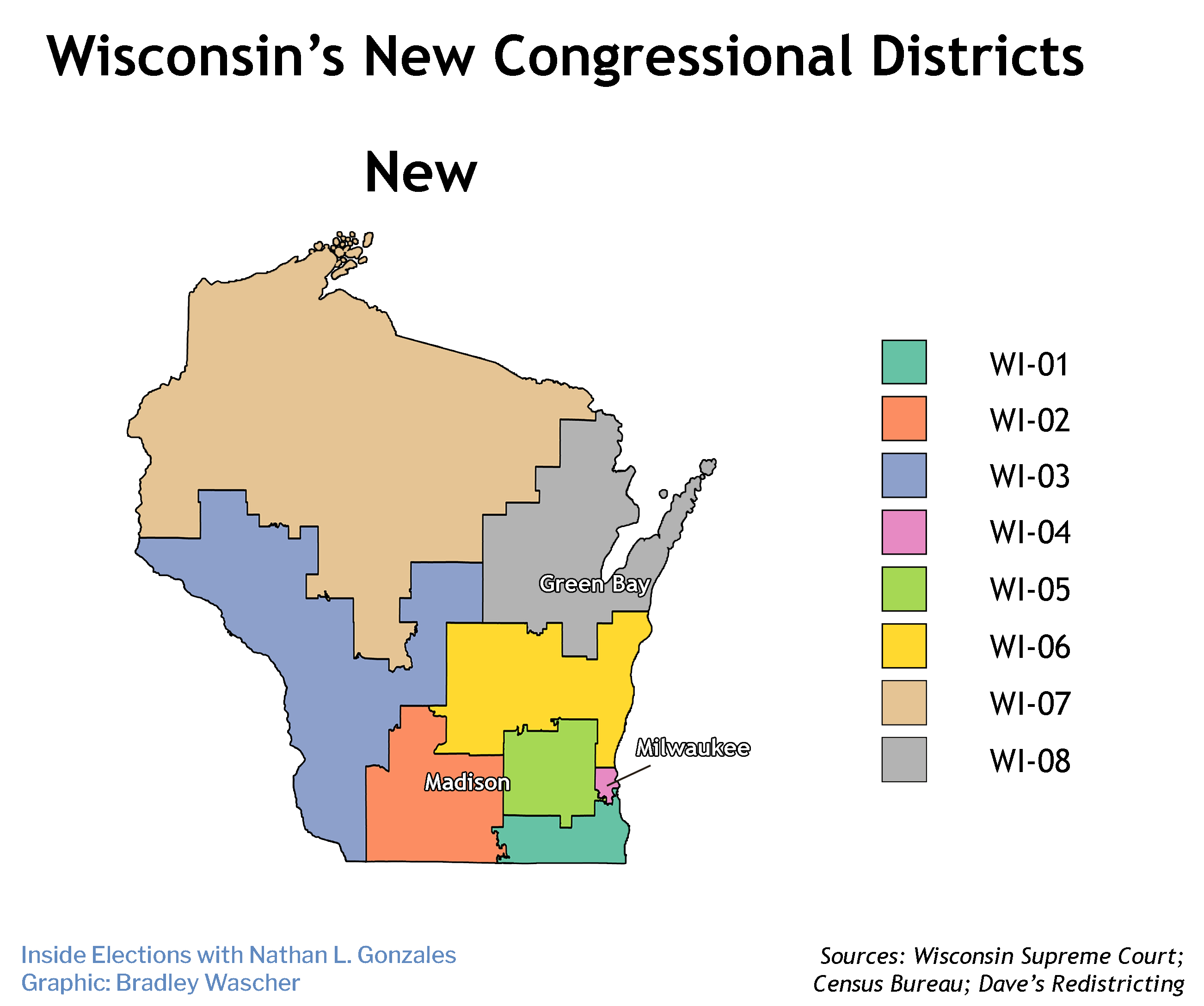 1st District
The 1st District, located at the southeast corner of the state and already encompassing Janesville, Kenosha and Racine, sheds conservative Waukesha County and picks up more Democratic areas including Beloit, Whitewater, and the Milwaukee suburbs of Cudahy, St. Francis, and South Milwaukee. As a result, while under the old lines the district voted for Trump, 54-45 percent, the new 1st would have voted for Trump by a narrower 50-48 percent margin.

Republican Bryan Steil is in his second term (he succeeded House Speaker Paul Ryan) and, while he could be vulnerable later in the decade due to the partisanship of his new district, he doesn’t appear to be much danger right now. His one announced Democratic opponent is college prep company owner Ann Roe, who reported just $45,000 in the bank on Dec. 31. Other Democrats may jump in now that redistricting is complete; the filing deadline is June 1. Initial rating: Solid Republican.

2nd District
The Madison-anchored 2nd District was the most overpopulated of any in the state before redistricting. Other than sending Beloit to the neighboring 1st, the 2nd’s boundaries are largely unchanged. Biden would have carried the new 2nd, 70-28 percent, so progressive Rep. Mark Pocan should have no trouble winning another term. Solid Democratic.

3rd District
Rep. Ron Kind’s southwestern Wisconsin district, which includes Eau Claire, La Crosse, and Stevens Point, was drawn as a Democratic vote sink just 10 years ago. But shifting political trends have made it much more Republican over the last decade; Trump actually increased his margin there in 2020 from 2016 despite doing worse statewide. The new map barely changes the 3rd, adding a few precincts in Sauk and Richmond counties and removing a few in Chippewa County. The overall partisanship of the district is unchanged — Trump would have won it by 5 points, 51-47 percent. Kind started the cycle as a top GOP target and has since said he won’t seek re-election. His Republican opponent from 2020, former Navy SEAL Derrick Van Orden, is running again and is a formidable fundraiser with a $1.4 million warchest on Dec. 31.

In the Democratic primary, state Sen. Brad Pfaff starts out as the candidate to beat — he’s raised the most money and has Kind’s endorsement. Former Army captain/CIA officer Deb McGrath and Eau Claire boutique owner Rebecca Cooke are also running, and the primary is late so there’s time for the race to develop.

While the district retains more of its Democratic DNA down ballot — it voted for Sen. Tammy Baldwin by 13 points and even narrowly for Democratic gubernatorial nominee Tony Evers by 2 points in 2018 — the combination of an open seat, a strong GOP candidate, and a good national environment for Republicans means this will be a tough hold for Democrats. They will try to tie Van Orden to the Jan. 6 insurrection; photos from that day show Van Orden on the Capitol grounds, though not in the building itself. But it’s not obvious how effective those attacks will be in a district trending toward Trump. Lean Republican.

4th District
The 4th District is still dominated by Milwaukee. It added River Hills to the north, and Wauwatosa and part of West Allis to the west, and shed some suburbs to the 1st district on its southern border. Longtime Democratic Rep. Gwen Moore shouldn’t have trouble winning another term, as Biden would have carried the 4th, 76-23 percent. Solid Democratic.

5th District
The 5th District sits just west of Milwaukee and was made considerably more Republican during redistricting. It shed most of its Milwaukee County area — Wauwatosa and part of West Allis — to the 4th District and picked up the southern half of conservative Waukesha County from the 1st District. Under the new lines, the 5th would have voted for Trump by 23 points, 61-38 percent. Real estate attorney Mike Van Someren is running as a Democrat, but GOP Rep. Scott Fitzgerald looks set to return to Congress. Solid Republican.

6th District
The Fox River Valley and Sheboygan-area 6th District picked up a few thousand voters near Lake Winnebago, most notably in New Holstein and Winneconne, but is otherwise unaltered. Incumbent Glenn Grothman faces a challenge from Doug Mullenix, a management consultant who moved to the state just a few years ago, in the GOP primary, but had a $573,000-to-$15,000 cash-on-hand advantage on Dec. 31. Trump would have carried the new 6th, 57-41 percent, so Grothman shouldn’t have trouble in the general election. Solid Republican.

7th District
The northwestern Wisconsin 7th District was left virtually untouched, aside from a few thousand additional voters near Chippewa Falls. Trump would have won this district, 59-39 percent. Democrats couldn’t make this seat competitive in a 2020 special election with a strong candidate, so GOP Rep. Tom Tiffany doesn’t have much to worry about. Solid Republican.

8th District
Other than losing slivers of Calumet and Winnebago counties on its southern edge near Oshkosh, the northeastern Wisconsin 8th District is identical to its previous iteration. Rep. Mike Gallagher is often talked about as a potential candidate for higher office given his sterling resume — he’s a young, telegenic Marine Corps veteran with a Ph.D. in history from Georgetown — but Sen. Ron Johnson’s decision to break his two-term pledge and run for re-election means Gallagher will have to wait to take his shot. Trump would have carried this seat, 56-41 percent, so he’s not in danger of losing a general election unless something significant changes, and he has no GOP primary challengers. Solid Republican.

This story first appeared in InsideElections.com on March 15, 2022.