Pennsylvania Redistricting: Keys to the Keystone

With a Democratic governor and GOP-controlled legislature, Pennsylvania’s redistricting process was bound for the courts from the beginning. Democrats even filed lawsuits preemptively in the commonwealth to prepare for that possibility.

After Gov. Tom Wolf vetoed the legislature’s map, the courts stepped in. First, a conservative lower court judge acting as a special master recommended adoption of the legislature’s map. Then, the Democratic-controlled state supreme court overruled the lower court and ordered adoption of a plan proposed by Democratic plaintiffs. Finally, the U.S. Supreme Court declined to overturn the state Supreme Court’s ruling on appeal from Pennsylvania Republicans.

But the state lost a district due to reapportionment and will only have 17 seats this decade. Biden would have carried nine of them, to Trump’s eight.

Technically, that means the eliminated district was a Republican one. And indeed, the map already forced one GOP incumbent, Fred Keller, into an early retirement. But it doesn’t mean Democrats can expect a 9-8 advantage automatically.

If Republicans benefit from a good enough national environment, they could conceivably win as many as 11 seats on the new map. 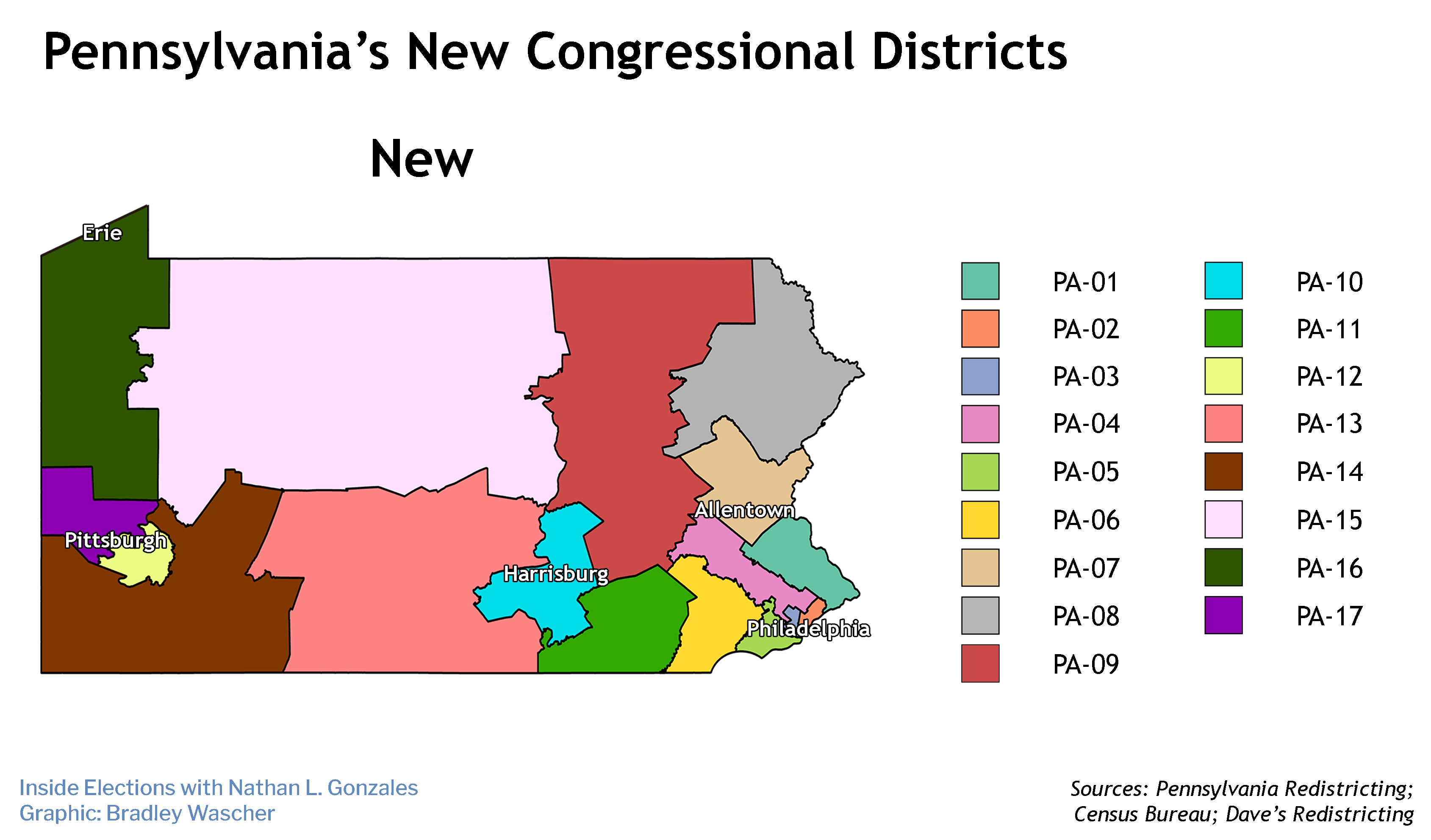 1st District
GOP Rep. Brian Fitzpatrick’s district is largely unchanged. It still encompasses all of Bucks County and a sliver of Montgomery County, and it would have voted for Biden by 5 points, 52-47 percent. Fitzpatrick has a moderate reputation and regularly outperforms the top of the ticket, winning a close race in 2018 even as his Democratic opponent outspent him 4-to-1 and the statewide Democratic candidates won the district by double digits.

In 2020, Democrats struggled to recruit against Fitzpatrick. In 2022, party strategists like the profile of Ashley Ehasz, a former Apache helicopter pilot and Deloitte consultant with degrees from West Point and Oxford. But, despite a viral announcement video, Ehasz has barely raised any money and reported just $49,000 in the bank on Dec. 31. Former Navy pilot Paul Fermo is also running. The Democratic lean of the district means Fitzpatrick can’t ignore his race, but in a good year for Republicans he starts out with a clear edge. Likely Republican.

2nd District
Democratic Rep. Brendan Boyle’s Northeast Philadelphia district is also left virtually unaltered. Biden would have carried it, 71-28 percent. State Sen. Sharif Street appeared interested in challenging Boyle in a primary if the district was redrawn to include more of his home turf of Philadelphia, but the son of former Philly Mayor John Street, who also flirted with a Senate bid, elected to stay in the state legislature. Solid Democratic.

3rd District
The Philadelphia-based 3rd District is deeply Democratic and would have voted for Biden, 90-9 percent. So the only danger for Rep. Dwight Evans is in a Democratic primary. Public health professional Alexandra Hunt is running as a progressive who supports Medicare For All, the Green New Deal and a wealth tax. Evans had $334,000 in the bank on Dec. 31, while Hunt — whose upfrontness about her previous work as a stripper has earned her national media attention — had $51,000. Solid Democratic.

4th District
While still anchored by Montgomery County, the 4th District now stretches further into Berks County. Biden would have won it, 59-40 percent. That means Democratic Rep. Madeleine Dean doesn’t have much to worry about. Solid Democratic.

5th District
The 5th District is still primarily based in Delaware County and south Philadelphia, but now extends further into Montgomery County to Norristown. It would have voted for Biden, 66-33 percent, so Rep. Mary Gay Scanlon looks set to return for a third term. Solid Democratic.

6th District
Rep. Chrissy Houlahan chose not to seek the Democratic nomination for Senate, and instead will run again in this Chester County district that’s virtually identical to its previous iteration. Biden would have won it, 57-42 percent. There’s a crowded GOP primary that includes Chester County Chamber of Commerce CEO Guy Ciarrocchi, who dropped out of the crowded race for governor, realtor Ron Vogel, and businessman Steve Fanelli. Solid Democratic.

7th District
The Lehigh Valley-based 7th is still anchored by Allentown, but picked up Republican-leaning Carbon County from the old 9th District and shed parts of Democratic-leaning Monroe County to the 8th District. As a result, the 7th goes from a district Biden carried by 5 points, 52-47 percent, to one he would have won by just 0.6 points, 49.7-49.1 percent. Republican Lisa Scheller, who lost to Rep. Susan Wild in 2020, 52-48 percent, is back for the rematch and remains a strong fundraiser. This will be a race to watch. Toss-up.

8th District
Other than picking up some Democratic-leaning areas from the 7th District in Monroe County, the 8th District is largely unchanged in the new map. Rep. Matt Cartwright is one of just a handful of Democrats to represent a district Trump won in 2020. The new lines mean the district is a bit more friendly to Democrats — Trump would have carried it by 3 points, 51-48 percent, rather than his 52-47 percent margin under the old lines — but don’t substantially alter the district’s highly competitive nature. Jim Bognet, the former Trump administration official who lost to Cartwright, 52-48 percent, is running again, and unlike in 2020 he will have the GOP primary to himself. Cartwright consistently overperforms the top of the ticket. Toss-up.

9th District
The most significant changes in the Pennsylvania map affected the 9th, 12th, and 15th districts, located in the center of the commonwealth. While the old 9th sat between Harrisburg and Wilkes-Barre, the new 9th stretches north from Lebanon and northern Berks County all the way to the New York border. Republican Dan Meuser represents about two-thirds of the new district, while the other third is from GOP Rep. Fred Keller’s 15th District.

The old 15th was effectively eliminated in redistricting, and Keller initially said he would challenge Meuser for the GOP nod in the new 9th before abruptly changing course and announcing he would not run for re-election at all. Trump would have carried the new 9th, 68-31 percent. Solid Republican.

10th District
The Harrisburg-based 10th District is largely the same as in the previous map, though it picked up a bit more of Cumberland County. It would have voted for Trump, 51-47 percent, in 2020. Democrats have targeted GOP Rep. Scott Perry for the past two cycles with no success, but continue to believe that the Freedom Caucus chairman’s brand of conservatism is a bad fit for a swing district and makes him vulnerable. Former state auditor Eugene DePasquale, who lost to Perry, 53-47 percent, in 2020, had been raising money for a rematch but announced he would not run. Carlisle School Board member/Army veteran Rick Coplen is the only notable Democrat running but faces a steep climb. Solid Republican.

12th District
The old 12th District, which stretched north from Harrisburg to Williamsport and the Northern Tier, was dissolved entirely into the new 9th and 15th districts, and incumbent Republican Fred Keller is not running for re-election.

The new 12th District is the successor to the old 18th District, which is still anchored by Pittsburgh but now also includes a sliver of Westmoreland County. Current 18th District Rep. Mike Doyle, a Democrat, is not seeking re-election, which means there will be a competitive primary for this reliably Democratic seat. Biden would have carried in 59-40 percent.

Steve Irwin (the former commissioner of the Pennsylvania Department of Banking & Securities, not the late Australian animal lover) and state Rep. Summer Lee are the leading contenders. University of Pittsburgh law professor Jerry Dickinson (who won 33 percent of the vote against Doyle in the 2020 primary) and Edgewood councilwoman Bhavini Patel are also running. Solid Democratic.

13th District
Rep. John Joyce’s South Central Pennsylvania district shed all of Westmoreland County and most of Somerset County to the new 14th, and picked up Mifflin, Juniata, and Perry counties from the old 12th and Cambria County from the old 15th. Trump would have carried it, 72-27 percent, making it the most Republican district in the state. Solid Republican.

14th District
The 14th District is still anchored to Pennsylvania’s southwestern corner but extends further east, picking up most of Indiana and Somerset counties, and most of Westmoreland County — though the suburbs nearest to Pittsburgh are now in the 12th district. GOP Rep. Guy Reschenthaler passed on a run for Senate or governor but shouldn’t have trouble winning another term in the House. Trump would have carried the district, 65-34 percent. Solid Republican.

15th District
The new 15th is the state’s largest district by land area, after expanding on its eastern flank to absorb half of the dissolved 12th District. The North-central Pennsylvania district now resembles a rectangle with its four corners at Warren, Armstrong, Snyder, and Tioga counties. Republican Glenn “G.T.”  Thompson only represents 60 percent of the new district, which could have left the seven-term incumbent vulnerable to a primary challenge, potentially from colleague Keller, who represents the other 40 percent of the district. But Keller isn’t running anywhere. Trump would have won the district, 68-31 percent. Solid Republican.

16th District
The Northwestern Pennsylvania 16th District expanded slightly into Venango County and absorbed the rest of Butler County from the 17th District but was otherwise unchanged in redistricting. Trump would have carried it, 60-39 percent. At the beginning of the 2020 cycle some Democrats thought GOP Rep. Mike Kelly might be vulnerable but he won handily that year and looks set to do so again. Solid Republican.

17th District
The 17th didn’t change much in redistricting and is still Beaver County and the Pittsburgh suburbs. But it will send a new representative to Congress now that incumbent Democrat Conor Lamb is running for Senate. Navy veteran/voting rights attorney Chris Deluzio is the fundraising leader on the Democratic side. Sean Meloy, an adviser to the LGBTQ-candidate focused group Victory Fund, is also running. Allegheny County Councilman/county GOP chairman Sam DeMarco, former Ross County Commissioner Jeremy Shaffer and fan manufacturer Tricia Staible are running as Republicans. Biden would have carried the new district by just under 6 points, 52-47 percent. That gives Democrats a bit of a cushion, but one that could easily evaporate if the national environment is as bad as it could be for them. Tilt Democratic.

This story first appeared in InsideElections.com on March 11, 2022.