In 2011, the last vestiges of the Democratic legislative majority in Arkansas drew a congressional map aimed to send at least two Democrats in Congress even as the party was in freefall.

The plan backfired, and after the 2012 elections, Republicans held all four of the state’s seats.

But later in the decade, political trends made the 2nd District competitive again despite the state’s overall Republican lean, and the Little Rock-based seat was heavily targeted by Democrats in 2018 and 2020.

Though the GOP held onto the 2nd in both cycles, state legislators weren’t interested in making that a tradition. So when redistricting rolled around last year, with Republicans in control of drawing the congressional map for the first time since Reconstruction, the 2nd was substantially altered to ensure GOP control for the coming decade.

As a result, barring some unforeseen event the Arkansas delegation will likely retain its 4R-0D breakdown in 2022 and beyond. 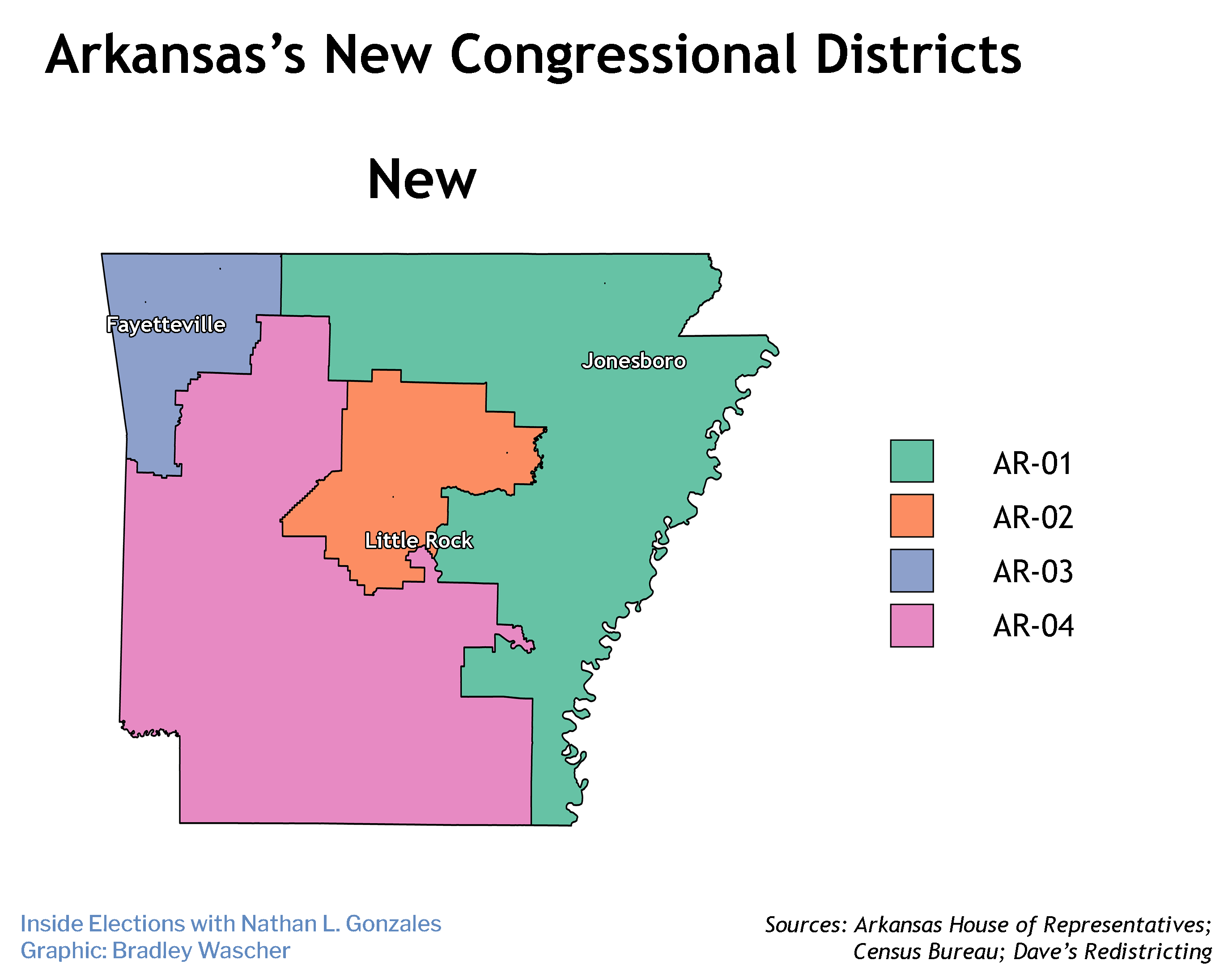 Most notably, the district picked up Boone and Marion counties in the north from the 3rd District, shed its Jefferson County portions to the 4th District, and extended for the first time into Pulaski County, picking up some heavily Democratic areas from the 2nd District east of Little Rock.

The new 1st would have voted for President Donald Trump, 69-28 percent. That means Crawford’s only vulnerability will come in the GOP primary, where he faces a challenge from state Rep. Brandt Smith of Jonesboro. But Smith raised barely any money in the last three months of 2021 and doesn’t look like much of a threat. Initial rating: Solid Republican.

2nd District
The engine behind the 2nd’s competitiveness last decade was Pulaski County, the centrally located home of Little Rock. The racially diverse county is Arkansas’ largest, and has grown steadily more Democratic over the last 20 years; Al Gore won it by 10 points in 2000 and Joe Biden won it by 22 points in 2020.

Pulaski’s leftward shift pushed the whole district toward Democrats even as its more rural areas moved toward Republicans. Mitt Romney carried the 2nd by 12 points in 2020; Trump carried it by 10 points in 2016 and then by 9 points in 2020, 53-44 percent.

To blunt Pulaski’s impact, mapmakers took the unprecedented step of splitting the county, parceling out its southeast portion to the neighboring 1st and 4th districts. They also added Cleburne County to the district’s northeast corner.

As a result, the new district would have voted for Trump, 55-42 percent, likely taking it off the board of competitive races in all but the best of cycles for Democrats — of which 2022 will not be one.

GOP Rep. French Hill faces a primary challenge from retired Army Col. Conrad Reynolds, who ran for Senate in 2010 and this seat in 2014 with backing from the Tea Party but placed third with 22 percent, behind French (55 percent) and state Rep. Ann Clemmer (23 percent). Reynolds had just $22,000 in the bank on Dec. 31 compared to Hill’s $1.5 million. Solid Republican. 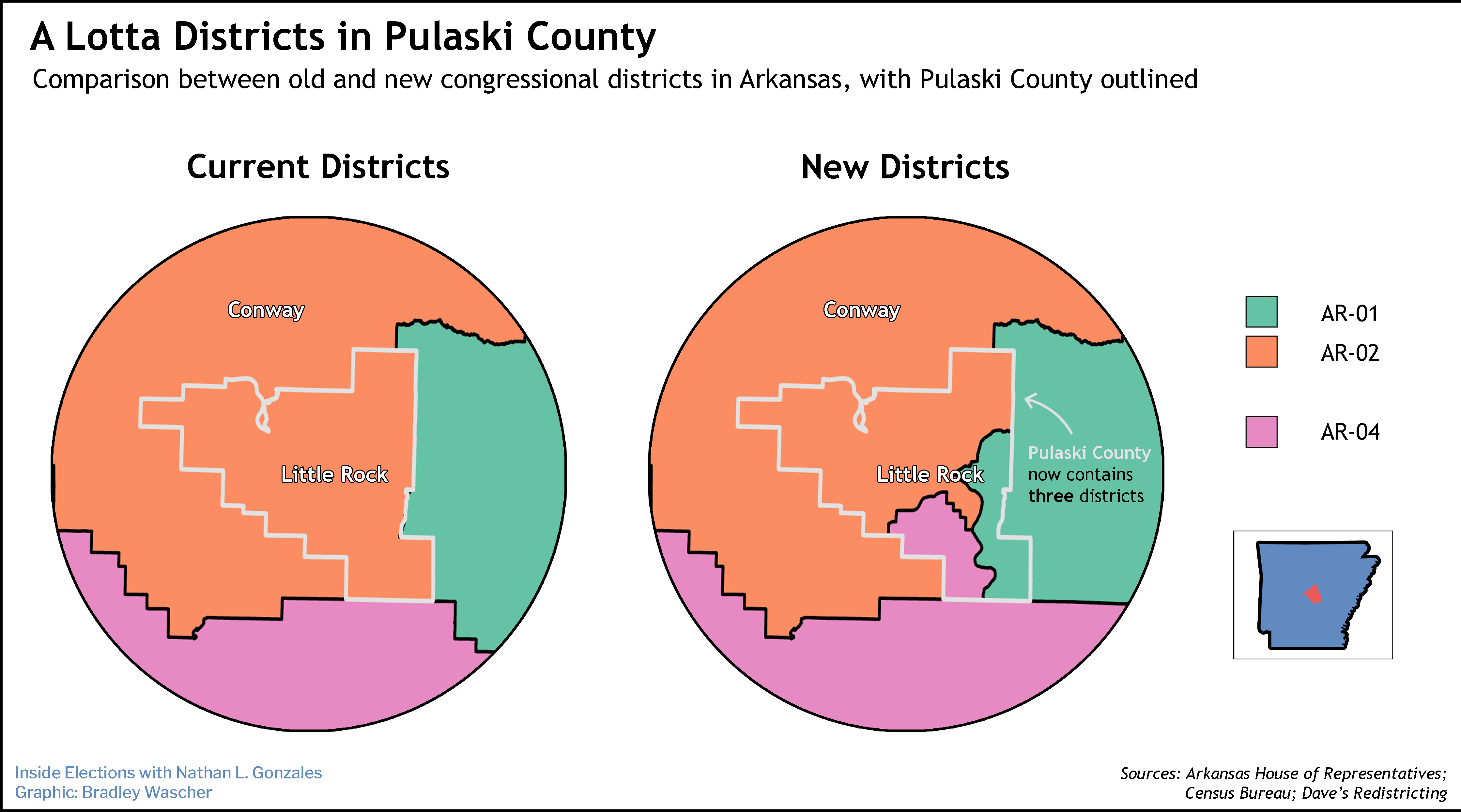 3rd District
The new 3rd remains nestled in the state’s northwestern corner but is significantly more compact than its current iteration, which resembles an inverted “U” with a base on the state’s northern border and prongs extending south to Fort Smith and Greenwood in the west and Russellville in the east.

The new lines lop off the eastern half of the “U” — Boone, Marion, Newton, and Pope counties — and add Madison County and the rest of Crawford County, and more of Sebastian County in the south.

The partisanship of the district is largely unchanged. Trump would have carried it, 60-37 percent.

GOP Rep. Steve Womack faces a challenge in the primary from University of Arkansas-Fayetteville law school student Neil Kumar, who has attacked Womack for voting for the original, independent Jan. 6 commission plan that passed the House but died in the Senate. A similar line of attack was used to significant effect against Texas Rep. Van Taylor in his GOP primary earlier in March, but Kumar seems an unlikely candidate to replicate that success. His past contributions to white nationalist websites including VDare and American Renaissance earned him a rare condemnation from the Arkansas Republican Party. Womack should be alright. Solid Republican.

4th District
The expansive 4th District still covers the entire southwest quadrant of the state and also still reaches into the Ozark-Saint Francis National Forest region to the north, though it sheds Madison County and its half of Crawford County to the 3rd District and picks up Pope County and the rest of Newton County from the 3rd.

In the center of the state, the 4th picks up the rest of Jefferson County from the 1st District, and, in a first, stretches into Pulaski County and picks up some heavily Democratic areas in south Little Rock.

Those changes don’t affect the partisan lean of the district much. Trump would have carried the 4th, 66-31 percent. GOP Rep. Bruce Westerman will be coming back to Washington, DC. Solid Republican.

This story first appeared in InsideElections.com on March 16, 2022.