Last year, Rhode Island appeared poised to lose its second congressional district due to reapportionment, and Democrats were girding for a primary melee between Reps. David Cicilline and Jim Langevin for the remaining at-large seat.

But thanks to stronger-than-expected census numbers the Ocean State retained both of its seats, leading to sighs of relief as both members looked set to return to Congress without a primary fight.

However, despite having a clear path to re-election, Langevin made the surprise decision to retire from Congress after 11 terms, creating an open seat in a state where such opportunities are rare.

Rhode Island has held competitive congressional elections in the past, but the state has become more solidly Democratic on the federal level over time. So despite Langevin’s retirement, Democrats begin in a strong position to retain their 2-0 advantage in the state’s delegation. But if the national environment gets worse for Democrats, Langevin’s retirement could open up an opportunity for Republicans. 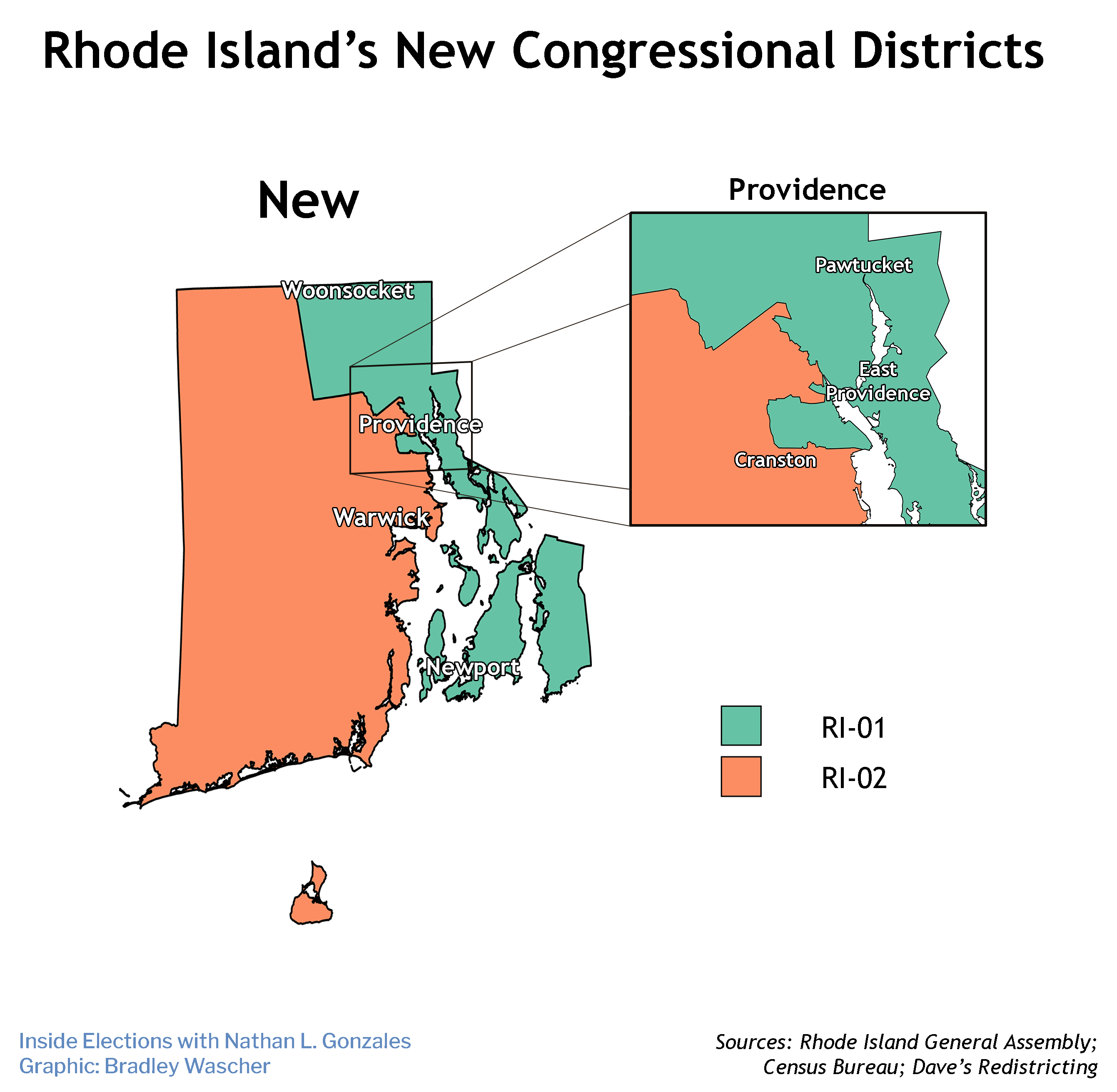 1st District
The 1st was slightly overpopulated, so it had to shed a few thousands residents to the 2nd district. But other than losing a handful of precincts in the Wanskuck neighborhood and in downtown Providence, the borders of the 1st were entirely unchanged.

Traditionally the more liberal of Rhode Island’s districts, the 1st would have voted for Joe Biden by 29 points, 64-35 percent, in 2020. Cicilline has been in office for a decade but is more prominent on the national stage than ever before, between his turn as an impeachment manager in the second trial of President Donald Trump, and his key role as a subcommittee chairman in working on a bipartisan antitrust bill targeting Big Tech. 2020 GOP Senate nominee Allen Waters and Fred Wysocki, who won 13 percent of the vote in 2020 running against Cicilline as an independent, are running as Republicans but neither will beat the former Providence mayor. Initial rating: Solid Democratic.

2nd District
The slightly underpopulated 2nd picked up a few precincts from the 1st District but otherwise remains unchanged. Langevin, the first quadriplegic elected to Congress, surprised observers when he announced in January that he would not seek re-election to the House after 22 years.

The newly open 2nd has attracted several contenders from both parties, with ramifications for Rhode Island politics extending beyond just this race.

Magaziner begins the primary in a strong position. He’s been in statewide office since 2014, and had been a top candidate for governor before switching to this race. He’s also setting the fundraising pace — his campaign says it raised $750,000 in the first weeks after he jumped in — and has significant support from organized labor including the Rhode Island AFL-CIO and United Nurses.

But Magaziner lives outside of the district in Providence — he says he will move, and members of Congress aren’t required to live in the specific they represent, just the state — and Fox is looking to exploit that potential vulnerability by emphasizing her own Cranston and Warwick roots. Fox also highlights the historic nature of her run — Rhode Island has only sent one woman to Congress in its 232-year history, and never a Democratic woman. But some of the more progressive candidates in the race could try to tie her to Langevin’s past pro-life stances.

Morgenthau comes from one of the most prominent political families in the Northeast, and her mother was an adviser to President Jimmy Carter who unsuccessfully sought this seat in 1988. Sarah brings a wealth of connections to the race from her time as an Obama and Biden administration official and should be a formidable fundraiser, but will also have to counter perceptions of carpetbagging given that she has spent much of her career away from Rhode Island — an issue she addresses directly in her announcement video.

Segal and Bah style themselves as more progressive alternatives to the top tier candidates, but it’s not clear yet whether either will have the resources to break out, especially with Magaziner already locking down organized labor.

On the GOP side, the frontrunner is Allan Fung, the former Cranston mayor who was his party’s nominee for governor in 2014 and 2018, coming within a few points of winning the first time but losing soundly in the rematch vs. Gov. Gina Raimondo. Fung is popular in Cranston — his wife recently defeated the state House speaker, which even some Democrats cheered — and despite his 2018 loss was reasonably well-liked by voters. He also has a reputation as a moderate in today’s GOP, essential for a Republican to be successful in the heavily Democratic state.

Fung is the best possible candidate for Republicans in the 2nd, which is the more Republican-friendly district; Biden would have carried it by 14 points, 54-42 percent, but Hillary Clinton would have carried it by a narrower 47-42 percent margin in 2016. But first he’ll have to make it through a primary against two candidates who may try to run to his right: state Sen. Jessica de la Cruz and former state Rep. Robert Lancia. Cruz is the state Senate minority whip and flipped a Democratic-held seat in 2018; Lancia was the 2020 nominee for the 2nd and has been running since last year. He had just $67,000 in the bank on Dec. 31.

Given that the district voted for Biden by 14 points, it should be a straightforward hold for Democrats. But the open seat, combined with the possibility of a strong Republican candidate, have Republicans looking at this race as a sleeper. If that happens, Democrats are in for a long election night. It could develop that way, but for now it remains Solid Democratic.

This story first appeared in InsideElections.com on March 28, 2022.