Mississippi was one of just three states to see its population decrease from 2010 to 2020, according to data released by the Census last year. But unlike the other two states that lost population over the decade (Illinois and West Virginia), Mississippi’s loss was not great enough to cost it a congressional seat during reapportionment.

As a result, the Magnolia State will continue to send four representatives to Congress through 2030.

With the Voting Rights Act requiring at least one Black-access district in the state — the statewide population is nearly 40 percent Black — the redistricting process mainly consisted of state legislators in Jackson re-balancing the four districts’ populations, which had grown unequal due to population shifts.

The result is a status quo map that should elect three Republicans and one Democrat to Congress for the coming decade. 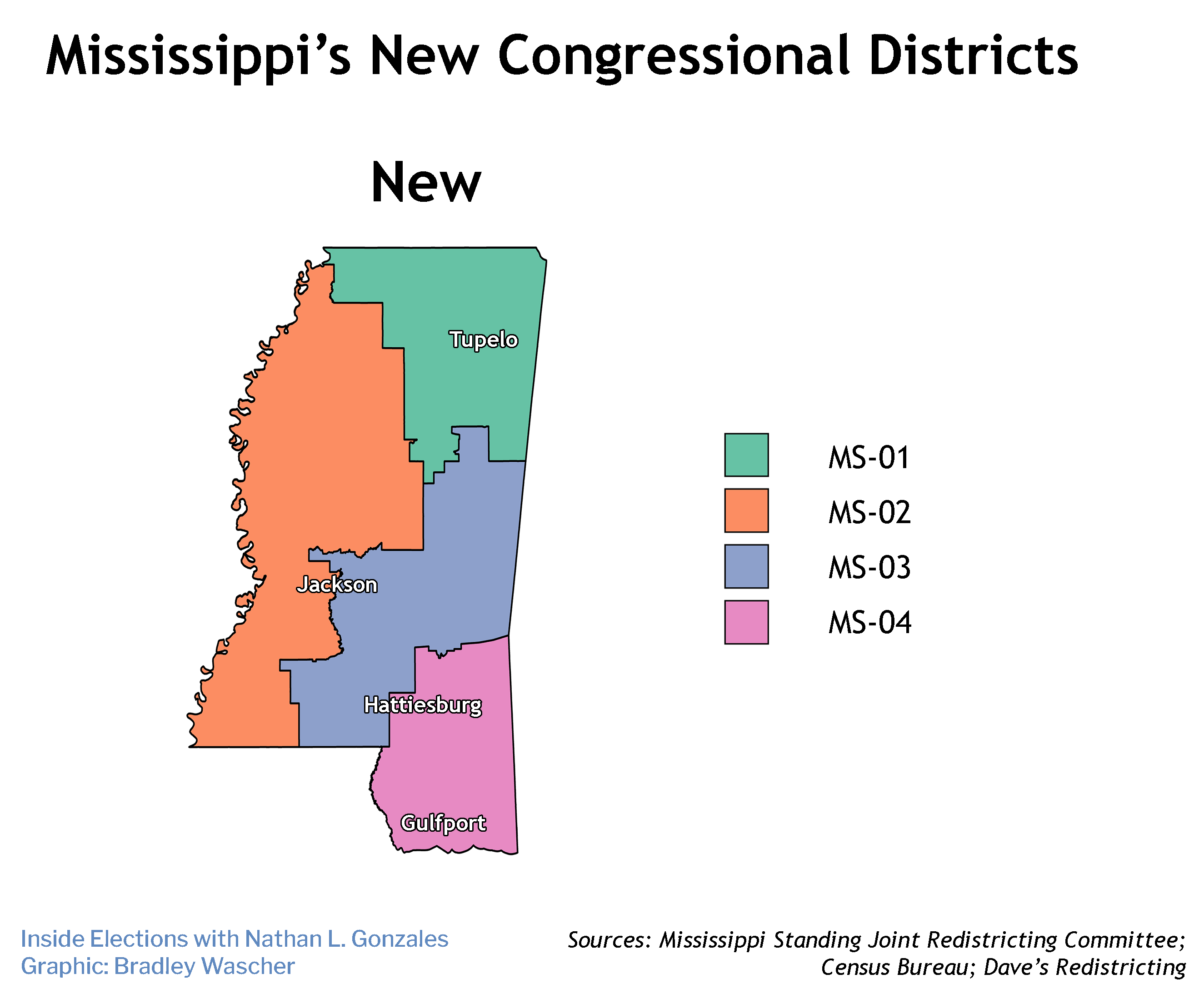 1st District
The 1st District, in the northeastern corner of the state, sheds Winston County and some of its area in the north of Oktibbeha County, to the 3rd District. It is otherwise unchanged.

President Donald Trump would have carried the new 1st, 65-33 percent. GOP Rep. Trent Kelly’s only vulnerability would be in a Republican primary, but he has no serious challengers. Initial rating: Solid Republican.

2nd District
The rural, majority-Black 2nd District is still based in the Mississippi Delta, in the state’s western half. The 2nd lost 9 percent of its population over the last decade, so it had to expand considerably to meet its ideal size.

It did so by picking up slightly more of downtown Jackson, as well as Adams, Wilkinson, Amite, and Franklin counties at the district’s southern edge, nestled next to Louisiana.

The new 2nd would have voted for Joe Biden, 63-36 percent. Longtime Democratic Rep. Bennie Thompson, who has newfound national prominence as chairman of the House Jan. 6 Committee, will return to Congress next year. Solid Democratic.

Trump would have carried the 3rd, 62-37 percent, which makes it the closest thing to a “swing” district in the state — Democratic gubernatorial nominee Jim Hood would have lost it by just 12 points in 2019.

But it’s still nowhere near competitive in a general election. GOP Rep. Michael Guest faces a primary challenge from former Navy pilot Michael Cassidy, who is attacking Guest over his vote for the original independent Jan. 6 commission in May 2021. While that line of attack worked for opponents of Texas Rep. Van Taylor earlier this month, Cassidy doesn’t have the funding, voter base, or endorsements that Taylor’s opponent Keith Self had, and unlike Taylor, Guest isn’t introducing himself to lots of new voters. Solid Republican.

4th District
The Gulf Coast-based 4th District was the most overpopulated in the state and needed to shed roughly 37,000 residents to meet its ideal population.

To do this, mapmakers removed Marion County in the west, the small piece of Clarke County previously in the northern part of the district, and a sliver of Jones county in the north as well.

Trump would have carried the new 4th, 68-30 percent. That means it’s a solid seat for Republicans in a general election.

But it doesn’t mean that Rep. Steven Palazzo can punch his return ticket to Washington just quite yet. The six-term incumbent has long had a penchant for controversy, including a decade ago when his staff threw a two-day bender in Annapolis, Md. that resulted in police being called. But more troubling to his re-election prospects is a March 2021 Office of Congressional Ethics report detailing Palazzo’s alleged use of hundreds of thousands of dollars of campaign funds for personal purposes. The House Ethics Committee is now investigating.

A mid-December poll from Public Opinion Strategies for the Palazzo campaign found the incumbent in a good position with 65 percent of the vote. Ezell was the only other candidate to register more than 50 percent name ID and was in second on the ballot with 8 percent. But that was before any candidate other than Palazzo had spent much money.

In Mississippi it takes an absolute majority to win the June 7 primary, so even if Palazzo places first but with less than 50 percent, he will have to face the runner-up in a June 28 runoff. Either way, this race is Solid Republican.

This story first appeared in InsideElections.com on March 21, 2022.