While the new congressional map in the state of Washington could result in the electoral status quo, multiple districts could host interesting races in 2022.

Control of the redistricting process belonged to a five-member bipartisan redistricting commission. The commissioners had originally failed to meet their initial midnight deadline for adopting new maps in November, which would have shifted responsibility of the redistricting process to the state Supreme Court. But rather than draw its own map, the court allowed the tardy commision plan to move forward. Those lines were ultimately approved by the state Legislature with some slight revisions (though there are lingering questions surrounding possible improprieties).

With a number of both parties’ incumbents shored up with friendlier lines, the most realistic pickup opportunity for Republicans this November is the 8th District. And two GOP incumbents are facing heat from fellow Republicans for voting to impeach Trump. Otherwise, Democrats are poised to maintain their four-seat advantage in the Washington congressional delegation. 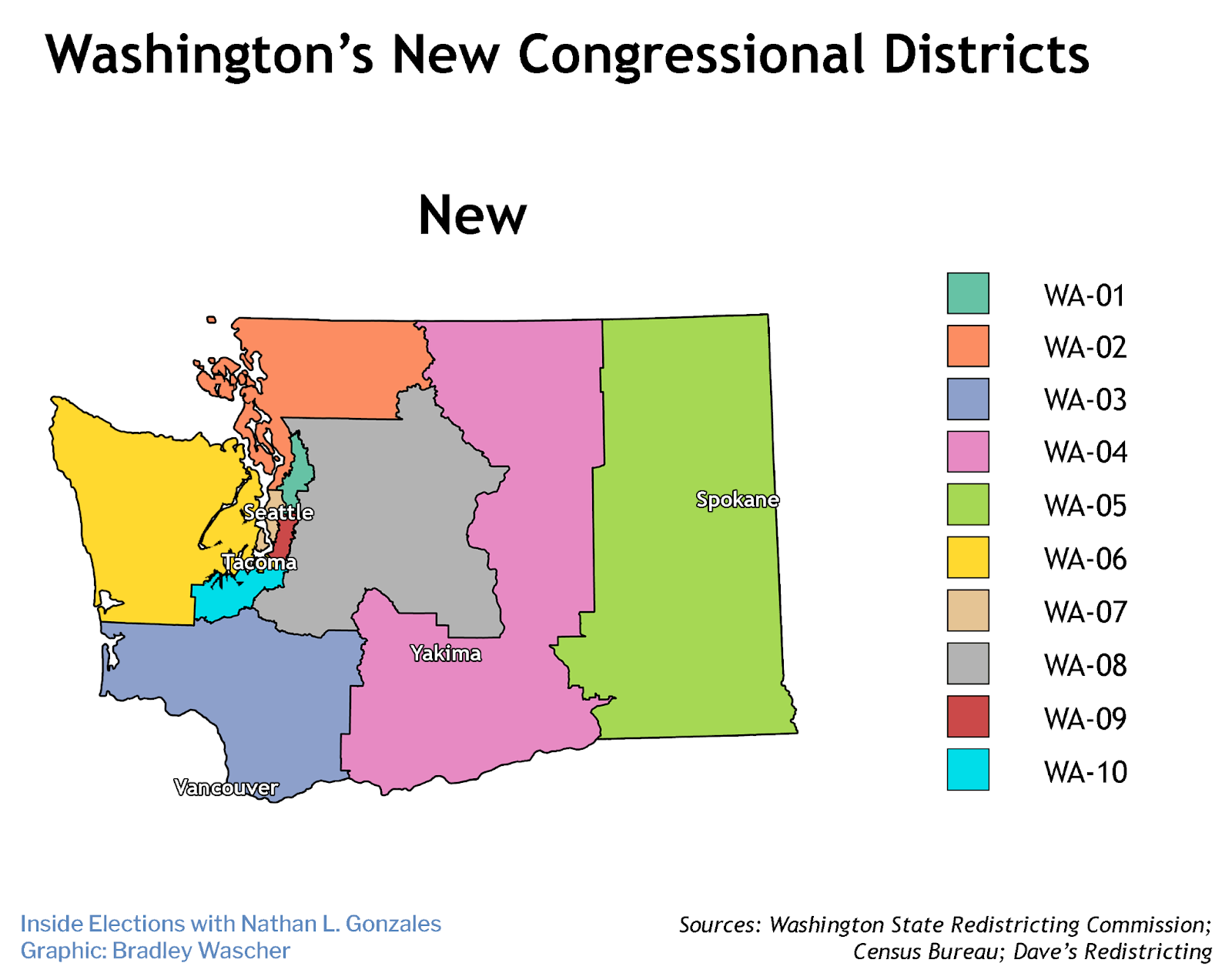 1st District
Under the new lines, the 1st is now reminiscent of its more compact configurations prior to the 2010 census. Redrawn to be a thin strip cutting through King and Snohomish counties, it still reaches into the suburbs northeast of Seattle and east of Everett, but it no longer extends farther north into Skagit and Whatcom counties. These changes make the district more favorable for Democrats: Biden would have won the new 1st by nearly 31 points, a 10-point increase compared to the outgoing lines. More broadly, the district preferred Democrats by an average of 17.4 points according to a composite of all federal and statewide elections in Washington between 2016 and 2020 calculated by Inside Elections. Democratic Rep. Suzan Delbene is set to earn her sixth term. Initial rating: Solid Democratic.

2nd District
The 2nd is Washington’s northwesternmost district, containing the suburbs north of Seattle. The district’s coverage around the Puget Sound and the city of Everett has changed in some ways, but it takes in more of Skagit County (Mount Vernon) and Whatcom County (Bellingham). The district remains strong for Democrats, voting for the party by an average of 14.1 points in the 2016-2020 composite, and Biden would have carried it by 23 points in 2020. Democratic Rep. Rick Larsen has a Democratic challenger in the form of 2020 candidate Jason Call, who finished third in the nonpartisan blanket primary with 14 percent, but the incumbent in no real danger. Solid Democratic.

3rd District
Located in southwestern Washington and containing Vancouver, the 3rd loses Klickitat County and trades a few precincts in southern Thurston County, but the changes elsewhere are minimal. The district had an average partisanship of R+8.6 in the composite of 2016-2020 elections, and Trump would have carried it by 8 points in 2016 and 4 points in 2020.

Rep. Jaime Herrera Beutler voted to impeach Trump following the riot at the Capitol, and many Republican candidates are looking to unseat her. Former Green Beret Joe Kent is endorsed by Trump, while state Rep. Vicki Kraft and Heidi St. John are also running. Brent Hennrich, a former cinema installation manager, is the best-funded Democrat; 2018/2020 general election candidate Carolyn Long is not trying a third time. Although the 3rd is the most vulnerable Republican-held seat held in the state, it still consistently prefers the GOP. Herrera Beutler outperformed Trump by approximately 4 points in 2020 amid a Democratic-leaning environment, so if the national mood stays in the GOP’s favor come November, she should win this time — as long as she withstands her intra-party opposition. If Kent is carrying the Republican flag in November, this seat would be more vulnerable. Solid Republican.

4th District
Situated east of the Cascades, the 4th contains Yakima and the Tri-Cities. The district loses most of its coverage into Adams and Franklin counties and all of its reach into Walla Walla County, with few modifications elsewhere.

Like Herrera Buetler in the 3rd District, Republican Rep. Dan Newhouse voted to impeach Trump, and he’s facing GOP challengers because of it. The Trump-endorsed candidate is 2020 gubernatorial nominee Loren Culp, who refused to concede that race despite losing to Gov. Jay Inslee by double-digits. Businessman/Navy veteran/former NASCAR driver Jerrod Sessler is running a heavily self-funded campaign, and businessman Doug White is running on the Democratic side. Preferring Republicans by an average of 21.7 points in the 2016-2020 composite and voting for Trump by 17 points in 2020, the 4th is the most Republican-leaning district in the state. Solid Republican.

5th District
Running along Washington’s border with Idaho*, the 5th loses portions of Adams, Franklin, and Walla Walla Counties. But it stays reliably Republican: the district’s average partisanship according to the 2016-2020 composite was R+14.3, and Trump would have won by 10 points in 2020. Republican Rep. Cathy McMorris Rodgers should cruise to a tenth term. Solid Republican.

6th District
The 6th, located in western Washington, received few changes: the Olympic Peninsula seat now fills all of Mason County, with more small rearrangements in precincts around Tacoma. Democratic Rep. Derek Kilmer doesn’t have much to worry about in this Biden+17 district that preferred Democrats by an average of 9.4 points in the composite of federal and statewide races between 2016 and 2020. Solid Democratic.

7th District
There are hardly any substantial differences in the Seattle-based 7th District. Most notably, it is now located entirely in King County, as it loses its slight reach into Snohomish County. Otherwise, it is still by far the most Democratic-leaning district in the state, and one of the most Democratic-leaning in the country, preferring Democrats by an average of 64 points in the 2016-2020 composite. Biden would have won by 75 points in 2020 — Democratic Rep. Pramila Jayapal is safe. Solid Democratic.

8th District
The 8th connects the eastern Seattle metro to Wenatchee, spanning the mountainous center of the state. The district gains area from King County but loses much of Auburn, and it also takes in most of western Snohomish County in the north while trading parts of Pierce County to the south.

The 8th will still be a highly competitive seat. According to the composite of statewide and federal races between 2016 and 2020, the district has an average partisanship of R+3.1, but it would have voted for Biden by approximately 7 points in 2020 and for Hillary Clinton by less than 4 points in 2016 (similar to its previous configuration). Democratic Rep. Kim Schrier is the first Democrat to hold the 8th since it was created after the 1980 census, but a number of Republicans are standing between her and a third term.

Army veteran Jesse Jensen, who lost to Schrier 52-48 percent in the 2020 general election, is running, as is 2020 GOP state Attorney General nominee Matt Larkin (who would have carried the new 8th in that race, 51-49 percent). Also in the field is King County Councilman/2012 GOP state Attorney General nominee Reagan Dunn, whose mother, Jennifer Dunn, held this seat for six terms in the 1990s and 2000s. Schrier is a strong fundraiser and reported a large cash advantage on Dec. 31, but in a GOP-leaning environment, any one of her Republican challengers could make November’s general election interesting. Toss-up.

9th District
Encompassing much of the metro east and south of Seattle, the 9th includes Kent and Renton. Under the new map, the district primarily trades land around the edges, notably losing its reach north past Bellevue and south into Pierce County. According to the 2016-2020 composite, the 9th preferred Democrats by an average of 36.2 points, and Biden would have carried it by 45 points in 2020. Democratic Rep. Adam Smith faces a challenge from the left by teachers' union leader Stephanie Gallardo, but he has had little difficulty dispatching opponents from his own party in the past. Solid Democratic.

10th District
The 10th covers the suburbs southwest of Seattle and includes the capital of Olympia. The district no longer reaches into Mason County (Shelton), but overall the district still trends Democratic. Freshman Democratic Rep. Marilyn Strickland should win a second term in this D+9.7 district that Biden would have carried by 17 points in 2020 (a smidge better than the previous lines). Solid Democratic.

This story first appeared in InsideElections.com on March 31, 2022.