No matter how you look at the polls, or which polls you look at, Joe Biden is gaining nationally.

In fact, according to the present Presidential Snapshot in Time, the former vice president is benefiting from his most comfortable edge in months. Across 34 national surveys released from May 30 through June 12, Biden led President Donald Trump by an average of 8.2 points (49.3 percent to 41.1 percent).

Before diving deeper, though, let’s take a step back to examine how that figure was calculated...because in all honesty, there’s no such thing as a “perfect” polling average.

Research for this series adheres to a straightforward and inclusive philosophy for aggregation. As long as a survey isn’t blatantly bogus, it’s added to the mix. After two weeks of collecting, a simple arithmetic mean is taken of the toplines; those final tallies then get reported here.

One notable quirk of this approach, a problem plaguing many other polling aggregators as well, is how it ignores specific methodological discrepancies. In other words, it practically treats every survey as the same, when that’s clearly not the case. Thankfully, such an assumption is far from detrimental to the snapshot-oriented goals of this column, and during droughts of high-quality polling, inclusivity can often be the only way to learn new information.

But in the real world, even fools understand that pollsters make in-house choices regarding methodology — which is pertinent here and today, because we’ve reached a moment where different types of polls produce noticeably different averages.

Across five live telephone surveys released over the last two weeks, Biden led Trump nationally by an average of 9.8 points (51.8 percent to 42 percent). Conversely, a collection of 29 other polls in the same period, all which were conducted at least partially online, yielded a slightly slimmer Biden advantage of 8.1 points (48.9 percent to 40.8 percent).

Broadly speaking, there are many good explanations for this gap between telephone surveys and online surveys, the primary being who picks up a phone versus who replies via the internet. Specifically for these newer horserace numbers, it means Biden courted a greater share of respondents in live interviews compared to online polls, by approximately a three-point margin; Trump, on the other hand, drew similar support regardless of mode.

Yet when navigating through media narratives over the next short while, a majority of trend-savvy readers shouldn’t worry whether the campaign is a ten-point race or a seven-point race or somewhere in the middle. It’s still June after all, and relative to previous Snapshots in Time, Biden is undeniably up: 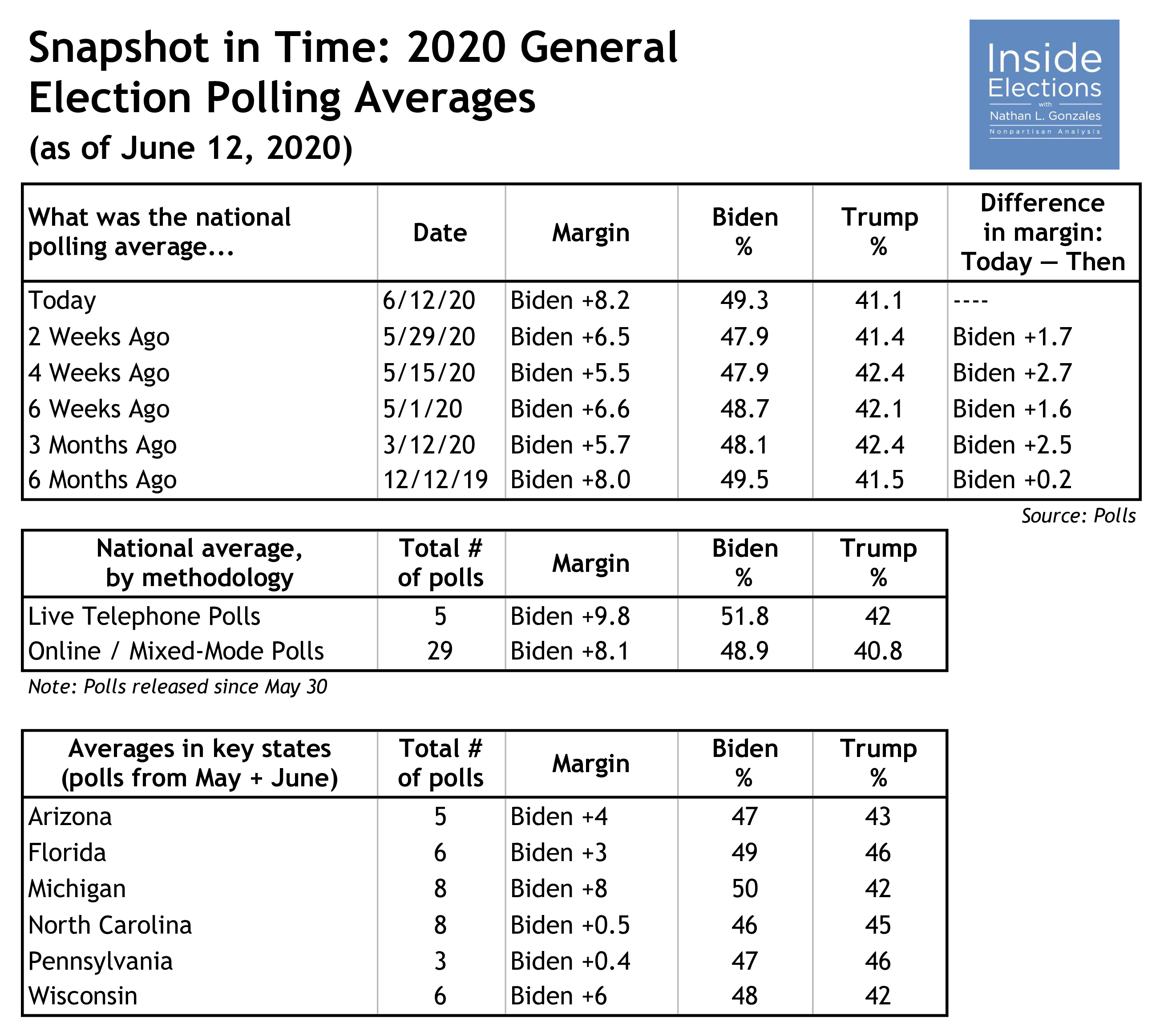 States
While the national picture visibly veers in one direction, attempting to determine the lay of the land in battleground states could keep one up all night. Indeed, this uniform shift nationwide is hardly detectable at the state level, caused in part by — surprise, surprise — a lack of fresh polling. Since May 30, data from potential battlegrounds has usually arrived in waves, with individual organizations of varying track records releasing numerous surveys of numerous states at the same time.

In Arizona, two new polls came out, featuring toplines split like a banana (and divisive like a bad fruit joke). Change Research (D) found the president ahead by one point, whereas Fox News saw a six-point advantage for the former vice president. To give an idea of the long-term context: across five polls of Arizona fielded since the beginning of May, Biden led Trump by an average of 3.6 points (46.8 percent to 43.2 percent). Inside Elections currently rates the state as a Toss-Up.

Another new poll by way of Change Research (D) came in Florida, finding Biden ahead by three points. A contemporaneous Cyngal survey found the same gap. Numbers throughout May reinforce this, because based on an average of six polls from the past six weeks, Biden maintained a lead of 3.1 points (48.8 percent to 45.7 percent). Inside Elections currently rates the state as a Toss-Up.

Next, although new surveys of Michigan all placed the president behind, their respective toplines could not seem more stochastic. On one end of the extreme, Change Research (D) found Biden ahead by two points and Public Policy Polling (D) found him ahead by six points; on the other end, EPIC-MRA recorded a much wider blue margin of twelve points. Correspondingly, an eight-poll aggregate dating back to May landed near the middle, Biden +7.5 (49.8 to 42.3 percent). Inside Elections currently rates the state as Tilting Democratic.

North Carolina’s three new surveys, all from party-affiliated pollsters, naturally tell different tales. Change Research (D) found Biden ahead by one point and Public Policy Polling (D) saw Biden ahead by four points, while Harper Polling (R) found Trump ahead by three points. But overall, this back-and-forth fits with the broader trend in North Carolina, as neither candidate has so far built a consistent advantage; an average of eight polls since the beginning of May found Biden “leading” by a mere half-point (45.6 percent to 45.1 percent). Inside Elections currently rates the state as a Toss-Up.

Another state contested by a razor-thin margin per recent data, Pennsylvania, only saw one new poll in the past two weeks — a Change Research (D) topline of Trump +4. Due to a prolonged period without reliable polling in the state, the long-term snapshot unfortunately provides little additional clarity. For what it’s worth, aggregating three Pennsylvania surveys from May onward painted a virtual tie (Biden 46.7 percent to Trump 46.3 percent). Inside Elections currently rates the state as Tilting Democratic.

Two new polls of Wisconsin were also released, indicating Biden’s big bump nationally may be starting to spill over to one of November’s top battlegrounds. Change Research (D) found a dead-even 45-45 race, but Fox News saw a Biden lead of nine points. Moreover, averaging six polls in Wisconsin over the past six weeks showed the former vice president outperforming the president by six points (48.2 percent to 42.2 percent). Inside Elections currently rates the state as a Toss-Up.

Shifting perspectives, other surveys suggest the president might be at risk of losing electoral votes from more reliably red states. In Iowa, which Barack Obama won twice but flipped to Trump in 2016, Public Policy Polling (D) found the president ahead by one point, but Civiqs (D) saw him tied with Biden at 46 percent. Quinnipiac University found Trump ahead by one point in Texas (which is rated Likely Republican), while Public Policy Polling (D) produced a 48-48 Lone Star standoff. Finally, Fox News found Biden ahead by two points, within the margin of error, in Ohio, which is currently rated as Likely Republican. So, as the saying goes, as Ohio goes, so goes the nation? Maybe so.

This story first appeared in Inside Elections with Nathan L. Gonzales on June 12, 2020.