In May 2006, The Raconteurs released their Grammy-nominated debut single, “Steady, As She Goes.” In May 2020, presidential polling followed that advice. Joe Biden maintains a steady national lead over President Donald Trump, while new state polls still show a tight race in key battlegrounds.

By discussing one-off surveys and comprehensive aggregates alike, this Presidential Snapshot in Time series seeks to contextualize the polling trends driving the 2020 election, thereby supplying a clearer image of the current electoral landscape.

National
After Memorial Day weekend, the former vice president enters the early summer with a consistent national advantage over the incumbent president. In an average of polls released from May 16 through May 29, Joe Biden led President Donald Trump by 6.5 points (47.9 percent to 41.4 percent).

Such a margin falls in line with prior snapshots of the campaign:

When comparing these numbers, keep in mind that polls are similar to roller coasters: it’s unwise to obsess over quarter-point gains and tenth-point drops, because they’re inconsequential in the long run if they don’t create meaningful shifts.

But unlike a good thrill ride, the November election may or may not promise larger twists and turns down the line. After all, nationwide surveys lay a straight track so far. While the margins in individual toplines ranged from Biden +1 to Biden +13, across 35 polls conducted in May, Trump trailed by an average of 5.9 points (47.8 percent to 41.9 percent). 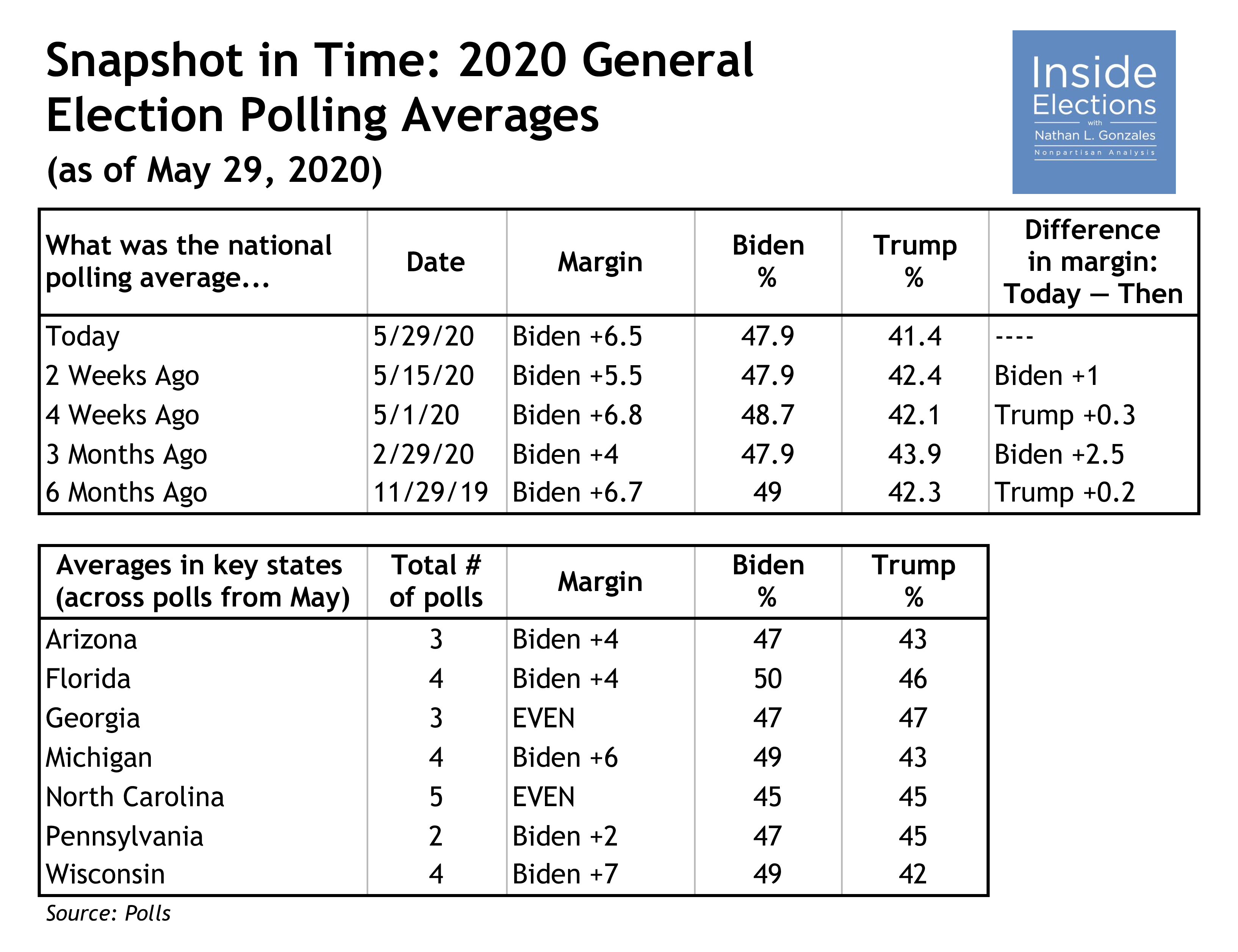 States
Throughout the previous two installments, this column has bemoaned the low number of state-level general election polls available in 2020. Fortunately, there’s a change of pace this time, albeit guided by pollsters with a limited track record. Between the six states currently rated Toss-Up or Tilting by Inside Elections — Arizona, Florida, North Carolina, Michigan, Pennsylvania, and Wisconsin — close to 20 new surveys were released in the last 14 days.

In Arizona, new numbers show Biden still on top. At the beginning of May, an average of polls estimated his lead at 4.4 points (48.6 percent to 44.2 percent). Since then, a mixed-mode live interview/IVR survey from OH Predictive Insights showed a seven-point margin for Biden over Trump, comparable to the same organization’s mid-April topline of Biden +9. The movement is negligible overall, as well: across three polls released in the past two weeks, the former vice president was ahead in Arizona by an average of 4.3 points (47.3 percent to 43 percent). Inside Elections currently rates it as a Toss-Up.

In Florida, the story strikes a near-identical note. At the beginning of this month, an average of polls suggested a 3.5-point advantage for Biden (46.5 percent to 43 percent). Notably, Florida Atlantic University’s mid-May mixed-mode online/IVR poll found Biden six points above Trump; yet in FAU’s March poll, the former vice president was actually trailing by two points. A St. Pete Polls IVR survey also portrayed a tight race this week, finding Biden ahead by one point. Nevertheless, the big-ticket toplines have budged little, but that’s still good news for Biden: across four polls released in the past 14 days, he led in Florida by an average of 3.2 points (49.5 percent to 46.3 percent). Inside Elections currently rates it as a Toss-Up.

In Michigan, the former vice president continues to perform well. At the beginning of May, he led Trump by an average of 5.5 points (46.5 percent to 41 percent). And since then, numbers have jumped around the board like a game of Press Your Luck. Redfield and Wilton Strategies and Hodas & Associates (R) showed Biden ahead by eight points and nine points respectively, whereas Change Research (D) found him with a less formidable three-point edge. Moreover, a new release from Public Policy Polling (D) saw Biden leading by six points, consistent with its eight-point and seven-point findings from April. By and large, though, Biden’s advantage holds in an aggregate of surveys: across four polls released in the past two weeks, he led in Michigan by an average of six points (49 percent to 43 percent). Inside Elections currently rates it as Tilting Democratic.

In terms of competitiveness, North Carolina is among the most interesting in this bunch. At the beginning of May, Trump and Biden were practically tied in polling averages (47 percent to 46.7 percent). Individual toplines from Meeting Street Insights (R) suggested as much just two weeks ago, placing both candidates at 47 percent apiece; contrastingly, Redfield and Wilton Strategies showed Biden ahead by two points, while a mixed-mode IVR/online survey by East Carolina University found Trump ahead by three points. North Carolina continues to toe the line more broadly: across four polls released in the past two weeks, Trump “led” Biden by 0.25 points (44.5 percent to 44.25 percent) — in other words, the race is even. Consequently, Inside Elections currently rates it as a Toss-Up.

Pennsylvania, on the other hand, saw just two new polls in the past two weeks. One came from Redfield and Wilton Strategies (showing Biden ahead by nine points), and the other from Hodas & Associates (R) (finding Trump ahead by four points). With data this sparse, the 14-day picture is muddy. But further-out aggregates reveal a more favorable outlook for Biden: across eight polls conducted in Pennsylvania since the beginning of April, the former vice president led the incumbent president by an average of 4.7 points (48.1 percent to 43.4 percent). Inside Elections currently rates it as Tilting Democratic.

In Wisconsin too, only two surveys have been released since mid-May, both contradictory. Hodas & Associates (R) found Biden leading by nine points, and results from Redfield and Wilton Strategies suggest a Trump margin of ten points. So again, focus on the longer-term averages: across seven polls conducted in Wisconsin since the beginning of April, the former vice president led the incumbent president by an average of five points (47.4 percent to 42.4 percent). Inside Elections currently rates it as a Toss-Up.

On the periphery, other could-be battleground states have also been home to new polls over the past two weeks. Georgia kept the volley going with another pair of divergent surveys. Civiqs (D) showed the former vice president leading by one point, while BK Strategies (R) found the incumbent president ahead by two points. Consistent with these variations from poll to poll, aggregating data from different time periods crowns different winners: across five surveys conducted in Georgia since the beginning of April, Trump led Biden by an average of 0.6 points (46.8 percent to 46.2 percent); yet when the sample space is reduced to include only the three May polls, both candidates score evenly (47 percent to 47 percent). Inside Elections currently rates Georgia as Leaning Republican.

Finally, rejoice, for there’s fresh data out of Minnesota. Although Hillary Clinton carried the state by fewer than two points in 2016, Minnesota has largely flown under pollsters’ radars for 2020. But this week saw the first new poll here in seven months — a live interview survey from Mason-Dixon/Minneapolis Star Tribune placed Biden five points ahead of Trump. The firm’s previous result, an admittedly sky-high Biden edge of twelve points from last October, has unsurprisingly reverted to the mean as the general election nears. So right now, Inside Elections rates Minnesota as Leaning Democratic, potentially presaging a Democrat-friendly margin that is about as thin today as it was four years ago.

This story first appeared in Inside Elections with Nathan L. Gonzales on May 29, 2020.