In April, the coronavirus pandemic was emerging as the hot issue playing out in campaign ads across the country. At the time, it felt like the once-in-a-lifetime national health crisis would dominate the news cycle for the foreseeable future.

What was unforeseeable was another once-in-a-lifetime national crisis, this one caused by the videotaped killing of a Black man by a Minneapolis police officer, that threatened to radically alter the political terrain just a couple months later.

As seen with coronavirus, TV ads can lag behind fast changing issues. They cost money and time to produce, and have to fit in stations’ advertising schedules. But because of their scarcity and their high engagement, particularly in local races, TV ads are still a good indication of what messages the campaigns feel are most effective.

A review of TV ads in the Kantar/CMAG database indicates that messaging on the protests has largely fallen on partisan lines, with Republicans featuring acts of violence such as looting and rioting, and Democrats focusing on themes of justice and mass movements.

Floyd was killed on May 25, and protests began in Minneapolis the next day, quickly spreading to hundreds of cities across the country, but the first ad on the issue did air until June 4, more than a week later.

The ad came from Marjorie Taylor Greene, a Republican running in Georgia’s 14th Congressional District. Greene, who is a promoter of QAnon and other conspiracy theories, and has posted photos with a former KKK leader on her social media, ran two ads on the issue, on June 4 and 5. The first ad included video of a burning police car in Minneapolis; in it, Greene calls out “radical Democrat women on the left waging war on our America,” as images of Reps. Nancy Pelosi, Rashida Tlaib, Alexandria Ocasio-Cortez, Ayanna Pressley and Ilhan Omar, Stacey Abrams, and activist Linda Sarsour appear on screen (six of those seven are women of color; two, Omar and Sarsour, are wearing hijabs). 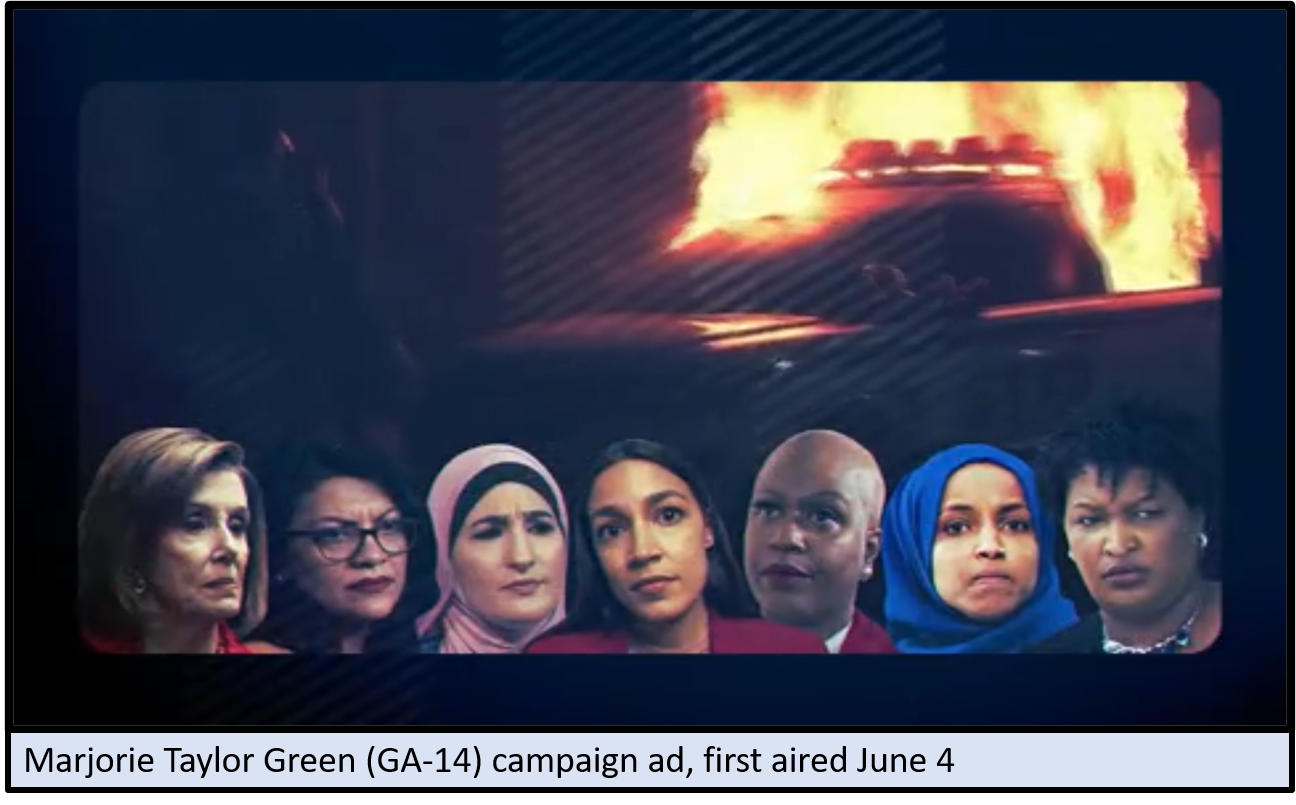 The second Greene ad featured the candidate standing with an assault rifle, calling out George Soros and “Hollywood elites” for funding “Antifa terrorists,” and ends with her cocking the rifle and warning Antifa to “stay out of northwest Georgia.” (Facebook removed the ad from its site, saying it “advocates the use of deadly weapons against a clearly defined group of people.”)

In South Carolina, unsuccessful GOP challenger Mike LaPierre struck a similar tone in his June 6 ad attacking Sen. Lindsay Graham, which included footage of looting and asked if Graham could defend the state against “violent thugs.”

And the Trump campaign launched an ad attacking former Vice President Joe Biden for “kneeling to the Left”; the spot placed a cutout of a kneeling Biden on top of an image of a burning streetscape. The ad aired on Fox News in Washington, DC -- The Daily Beast has reported the Trump campaign is running ads in DC to “put the president himself at ease” at a time when his polling numbers have suffered. 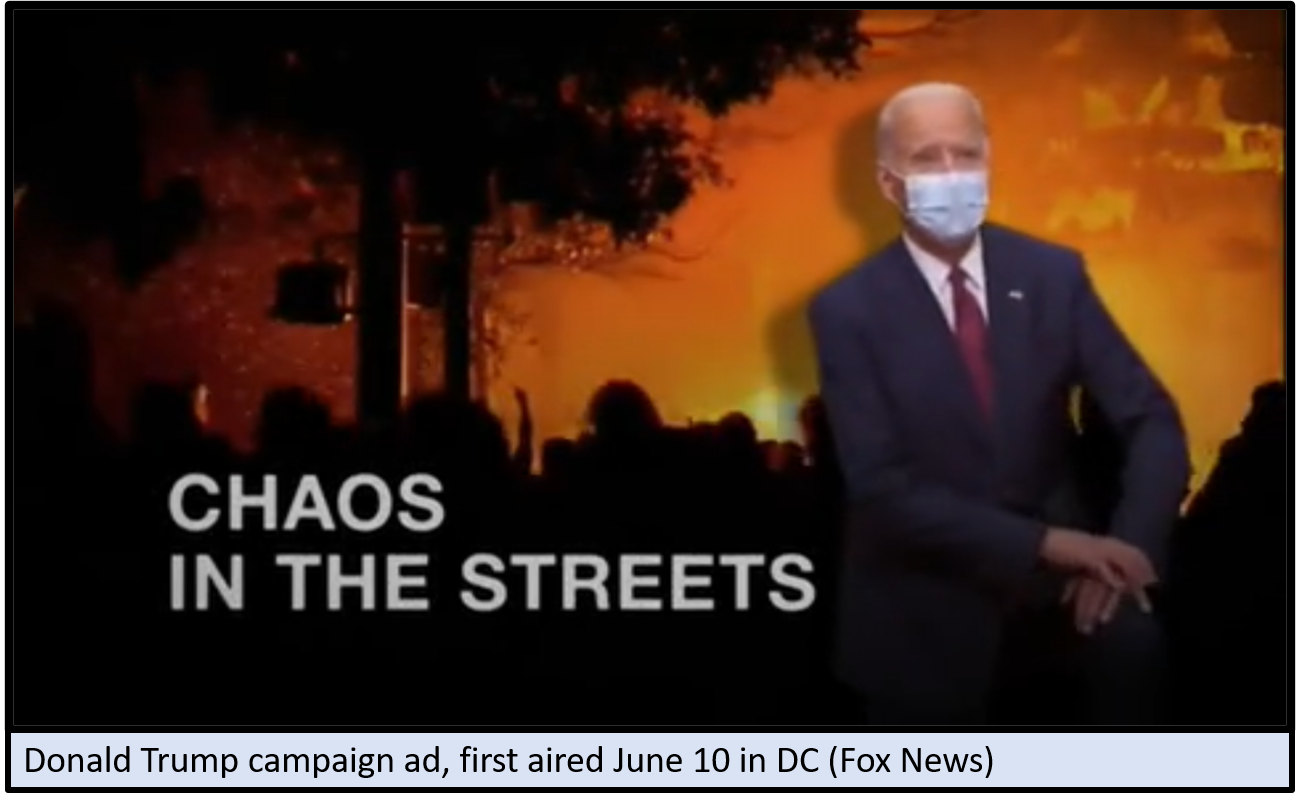 One Republican, however, adopted a more conciliatory stance. John James, running for Senate in Michigan, is the only Black GOP Senate candidate this cycle. He released two direct-to-camera spots on June 5, in which he decried Floyd’s murder as “an evil act of cowardice,” appealed to unity and stated that love is stronger than hate. He also noted that “using Floyd’s death as an excuse to loot and burn is criminal.”

Several candidates weave together the twin crises of coronavirus and racism to promote a message of unity and reconciliation. A June 6 spot from Jamie Harrison, running for Senate in South Carolina, included him quoting scripture, while a June 9 ad from Kentucky Senate candidate Charles Booker said that only a “real Democrat” can solve the two challenges (a shot at his primary opponent, Amy McGrath).

And a June 10 spot from Rep. Joe Kennedy, who is running for Senate in Massachusetts, noted that this is “a moment that will define a generation,” and that “normal is broken.” Kennedy, who is challenging Sen. Ed Markey in the primary, is running a campaign explicitly centered on generational change. 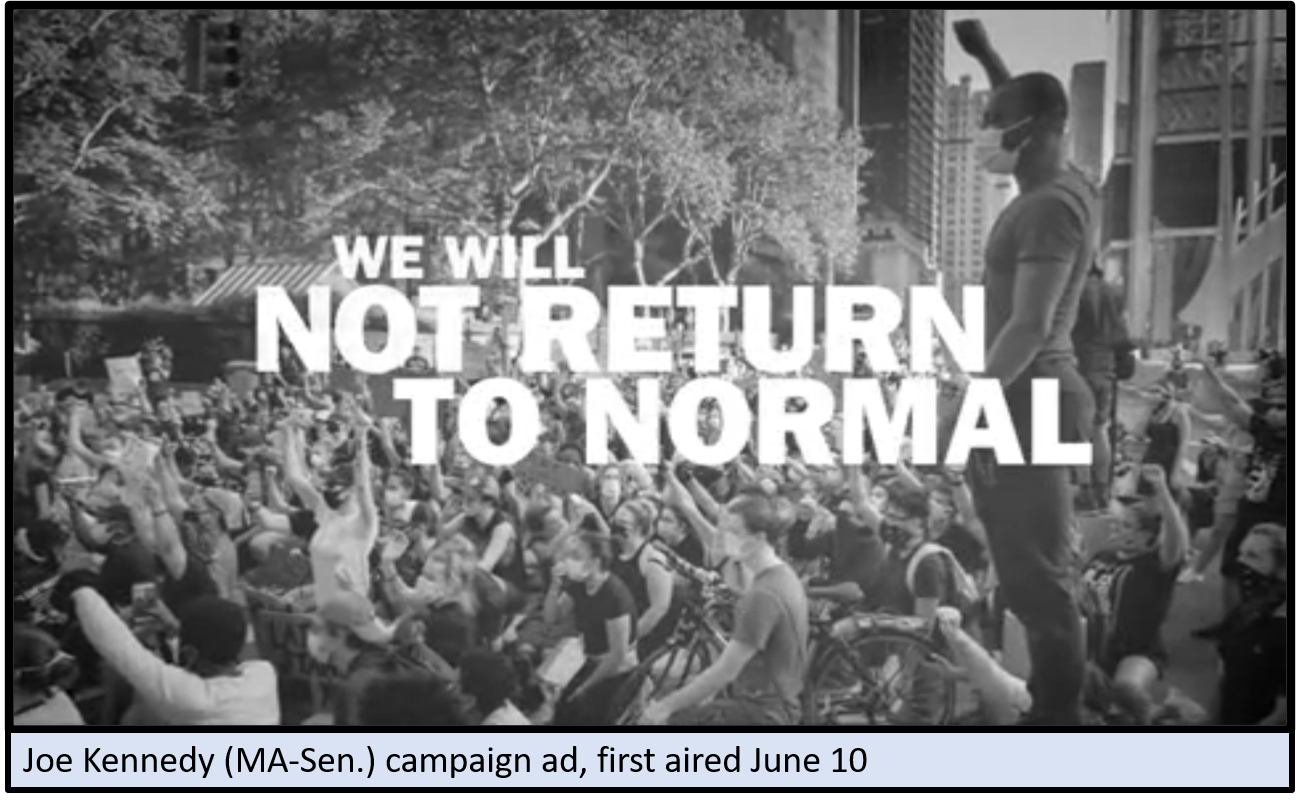 Some Democrats have gone on the offensive. Perry Gershon, who is competing for the Democratic nomination on Long Island’s 1st District, put out a June 8 ad taking President Donald Trump to task for using military force to disperse peaceful protesters, and GOP Rep. Lee Zeldin for supporting it.

A June 5 ad from the group Republicans for the Rule of Law that aired in Washington, DC, juxtaposed Trump’s inaugural speech about “American carnage” with images of coronavirus patients, the president’s tweets on shooting looters, and heavily armed police marching through tear gas. It is also the only ad to use footage directly from the video of Floyd’s death that sparked the protests. 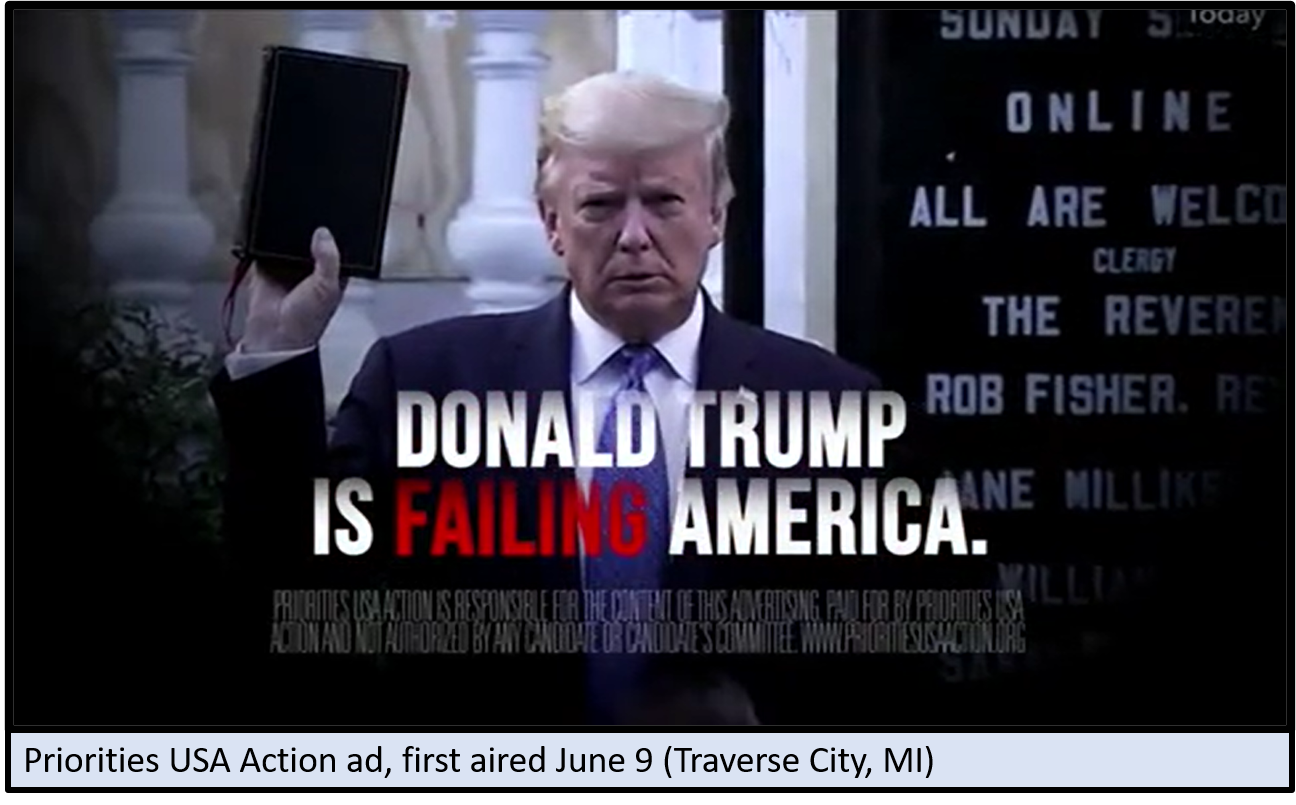 An ad from Priorities USA, one of the largest Democratic super PACs, also includes images of protesters and the forced clearing of Lafayette Square; it ends on an image of the president’s photo op outside St. John’s Church, with the caption, “Donald Trump is failing America.” It aired in Traverse City, Michigan, on June 9.

This story first appeared in Inside Elections with Nathan L. Gonzales on June 11, 2020.