There’s little reason to believe Joe Biden’s polling lead has changed over the last fortnight, but that advantage over President Donald Trump still sits in a league of its own.

Across 17 national polls released during the past two weeks, Biden led Trump by an average of 7.5 points (48.5 percent to 41 percent). Looking back, not much has moved relative to recent Snapshots:

Part of this stagnation is no doubt due to a dearth of data. By one metric, only 22 national polls were fielded during the first half of July, compared to 33 in June and 26 in May. Moreover, the lion’s share of these new surveys was conducted online, a mode that continues to produce slightly less favorable results for the former vice president. By contrast, of the five live telephone polls released in July so far, four showed Biden ahead by at least 10 points. 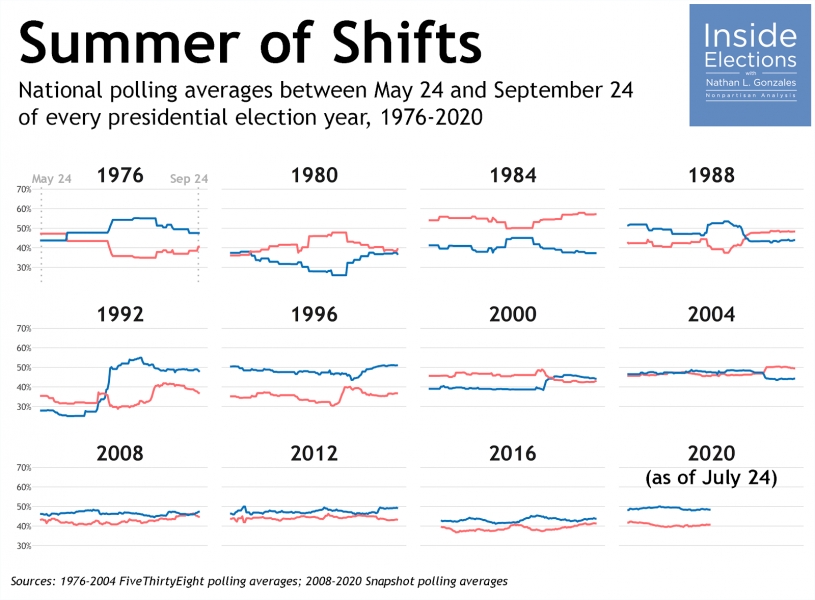 So, given the lack of polling over the last two weeks, it might be more useful to discuss how the numbers have moved over the last 44 years. Using data from FiveThirtyEight, along with original calculations, this chart shows the summer polling averages of every Democrat and Republican presidential candidate dating back to 1976.

One immediately clear pattern is the evident tightening near the end of each timeline (representing late September of every election year). This should come as no surprise, because wide summer gaps tend to close for a variety of reasons.

In some cases, candidates enjoyed a considerable convention bounce, as Bill Clinton did after the Democratic National Convention in New York City and Ross Perot’s exit from the race in 1992. In other cases, newly minted nominees were the targets of successful attacks from their opponents, as gaffe-prone Michael Dukakis learned in the summer of 1988. More often than not, though, the gap narrows simply because more voters begin to tune in and make up their minds.

That leads to the obvious question: will such tightening happen in 2020? Nate Cohn asked the same in his recent column for The New York Times’ Upshot, ultimately concluding...maybe. In Cohn’s eyes, Trump’s chances of recovery hinge upon his handling of the coronavirus, an argument difficult to disagree with.

Bearing this in mind, a more relevant trend is the tighter margin in recent election years. Despite lopsided outcomes in contests such as 1964 or 1972, 20-point differences in the national popular vote just don’t happen anymore. In stark contrast to 1984, when Ronald Reagan routed Walter Mondale in 49 states, Democratic voters and Republican voters have since sorted themselves into firmly locked camps. As a result, small margins are now the norm.

That’s why Biden’s current lead over Trump is so noteworthy: based on the chart, this marks the largest polling gap between presidential candidates of any summer since 1996. Whether it sticks leading into autumn is yet to be seen.

A Growing Roster of Battlegrounds
Remember the lack of fresh data over the last two weeks? This shortage doesn’t only apply to national polls — even with an expanding electoral map, certain battlegrounds received few new surveys. 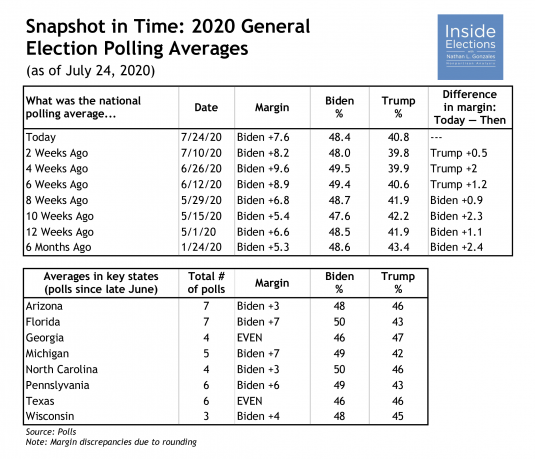 Florida saw five new polls, all suggesting large leads for Biden. CBS/YouGov and St. Pete Polls each found him ahead by 6 points, Change Research saw an advantage of 7 points (compared to Biden +5 in late June), Gravis Marketing (R) had Biden ahead by 10 points, and Quinnipiac University found Biden’s lead at 13 points. Longer-term aggregates continue to trend favorably toward the challenger, too: seven polls since late June showed Biden ahead by an average of 6.7 points (49.7 percent to 43 percent). Tilt Democratic.

Georgia’s latest surveys highlight why the state has emerged as a top battleground. Trafalgar Group (R) showed Trump +7, while an internal poll for the Jon Ossoff Senate campaign conducted by Garin-Hart-Yang Research (D) had Biden +4. Four surveys going back to late June show Trump “leading” slightly by an average of 0.5 points (46.5 percent to 46 percent). Toss-Up.

Michigan’s new polls fall in line with previous results placing the former vice president ahead. Change Research (D) saw Biden up by 6 points (compared to Biden +5 from late June), Public Policy Polling (D) found a lead of 7 points (compared to Biden +6 from late June), and Fox News placed his advantage at 9 points. This margin is reflected in an average of five polls since last month — Biden was ahead by 6.7 points (49 percent to 42.3 percent). Lean Democratic.

North Carolina’s latest toplines suggest a still-close contest here, as well. Cardinal Point Analytics found Trump ahead by 1 point, but Change Research (D) placed Biden ahead by 1 point (their late-June poll had Biden +7). Despite this short-term disagreement, the former vice president led in an average of surveys dating back to the end of last month: across those four polls, Biden’s advantage was 3.3 points (49.7 percent to 46.3 percent). Toss-Up.

Texas also appears to be trending toward a close matchup, at least based on the newest polling. Although CBS/YouGov found Trump +1, Quinnipiac University instead gave the same edge to his opponent, for a topline of Biden +1. UT-Tyler, on the other hand, recorded a Biden +5 margin. Broadly, across an aggregate of six polls since late June, the former vice president “outperformed” the incumbent president by an average of 0.2 points (45.7 percent to 45.5 percent). Tilt Republican.

The sole new survey in Ohio came from Rasmussen Reports, and it showed Biden ahead by 4 points. Just four polls of this state, which Trump carried by 8 points in 2016, have been released since May, rendering a way-back average inappropriate and inconclusive. Tilt Republican.

In Wisconsin, the most notable survey came as part of the latest wave from Change Research (D), placing Biden ahead by 6 points (compared to his 8-point lead in late June). Three polls since last month show Biden ahead by an average of 3.5 points (48 percent to 44.5 percent). Tilt Democratic.

And still, not much information is coming from Iowa, which was moved to Tilt Republican. Only four polls have been released since early June, all suggesting a razor-thin race for President Trump. Four years ago, he defeated Hillary Clinton by nearly 10 points.

This story first appeared in Inside Elections with Nathan L. Gonzales on July 24, 2020.