Compared to the outgoing districts, the new lines saw minimal changes — a conscious decision on the part of GOP mapmakers — with the most noticeable differences in the 1st District, which is now more favorable for Republicans.

The maps have faced pushback from Democrats and legal groups. Some argue for the addition of a second district accommodating the state’s Black voters, alongside the existing 6th District, as one-quarter of the state’s population is African American. In fact, this is the sixth consecutive redistricting cycle in which the constitutionality of South Carolina’s maps has come under scrutiny.

But considering these most recent legal challenges have all but stalled in the courts, Republicans will likely maintain their 6R-1D majority in the congressional delegation. 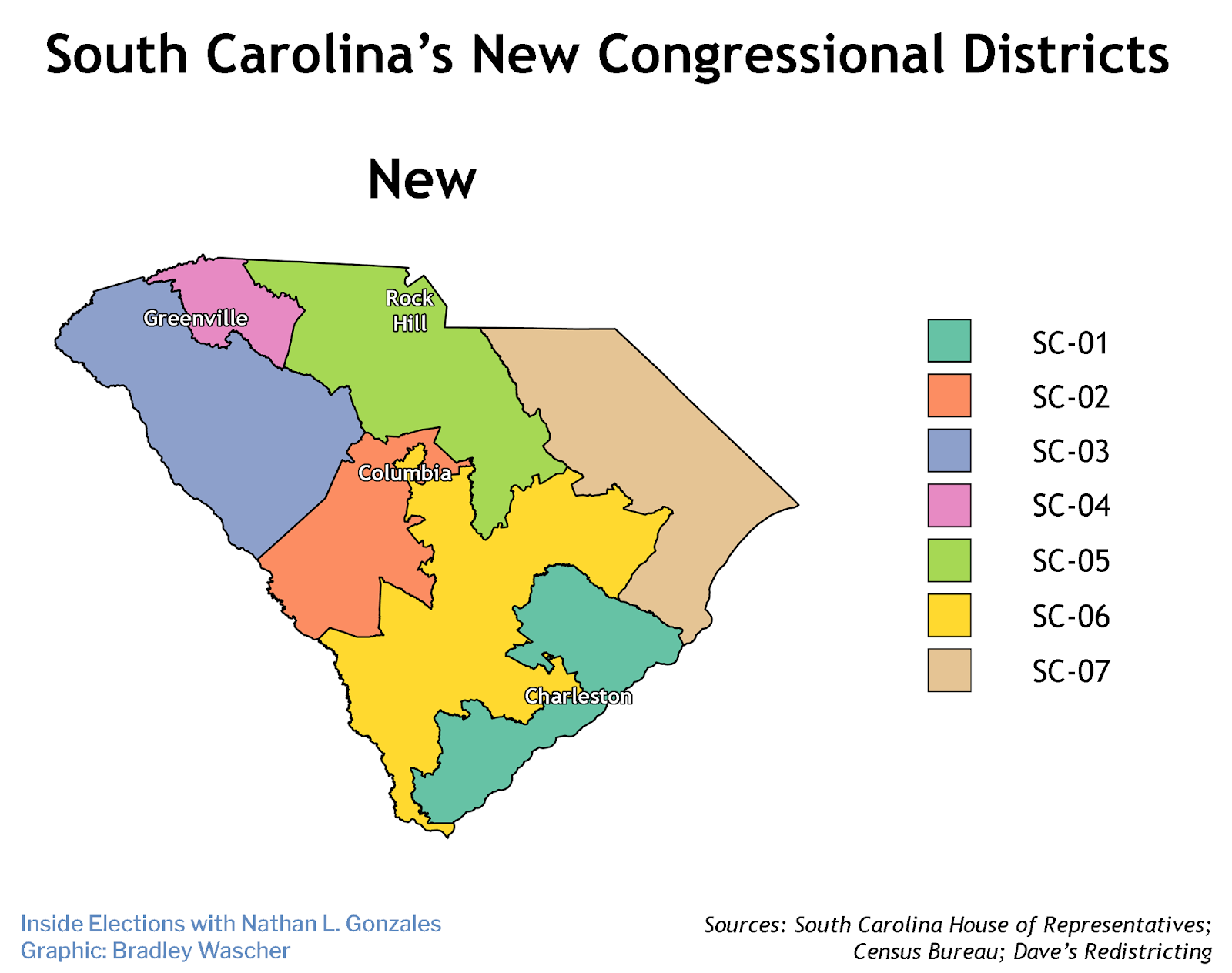 1st District
Located in southeastern South Carolina (also known as the Lowcountry), the 1st trades away most of its coverage in Charleston for more reach into Berkeley County. These changes make the district friendlier to Republicans, meaning they will probably avoid a similar situation to 2018, when Democrat Joe Cunningham flipped the district in an upset (before promptly losing to now-Republican Rep. Nancy Mace in 2020).

Across a composite of eight federal and statewide elections in South Carolina between 2016 and 2020 calculated by Inside Elections, the new 1st preferred Republicans by an average of 12.5 points, and the district would have voted for former President Donald Trump by approximately 8 points in 2020. The best-funded Democrat in the race is pediatrician Annie Andrews, but Mace’s biggest challenge looks like the primary, where she’s being challenged by Trump-endorsed Katie Arrington (who already knocked off one incumbent in this district, then-Rep. Mark Sanford, in the 2018 primary). Rating: Solid Republican.

2nd District
The 2nd stays largely similar to its previous configuration, containing portions of the Columbia metro area as well as the city of Aiken. So it shouldn’t come as a surprise that Trump would have carried the new 2nd by around 10 points in 2020, similar to his margin under the outgoing lines. Overall, the district preferred Republicans by an average of 14 points in the composite of 2016-2020 elections. GOP Rep. Joe Wilson is in no real danger. Rating: Solid Republican.

3rd District
The 3rd District, home to parts of Upstate South Carolina (including the city of Anderson), saw few changes apart from the full absorption of Newberry County. As a result, the district remains the most Republican-leaning in the state: its average partisanship in the 2016-2020 composite was R+37.1, and Trump would have carried it by 36 points in 2020. There are currently no Democrats running against Republican Rep. Jeff Duncan. Rating: Solid Republican.

4th District
The 4th saw few changes to its geography or partisanship; containing much of Greenville and Spartanburg counties, the district is still heavily Republican. The new 4th would have voted for Trump by 19 points in 2020, and its average partisanship in the composite of 2016-2020 elections was R+23.1. But that doesn’t necessarily mean Republican Rep. William Timmons will cruise to a third term. Following a drawn-out power struggle in the Greenville County Republican Party last year, three additional candidates — pastor Mark Burns, businessman Michael LaPierre, and former Timmons staffer George Abuzeid — are running in the GOP primary, which has morphed into a proxy contest to see who can tie himself closest to Trump. Still, Timmons boasts a war chest that is over six times the size of his three challengers combined. Rating: Solid Republican.

5th District
The 5th District loses its reach into Newberry County, but it keeps Rock Hill (a Charlotte, N.C. suburb) — and stays reliably Republican. The district has an average partisanship of R+18.4 according to the composite of 2016-2020 elections, and Trump would have won it by 18 points in 2020. Republican Rep. Ralph Norman is currently running unopposed. Rating: Solid Republican.

6th District
The 6th connects Columbia and Charleston, while also covering a handful of rural counties, to create South Carolina’s sole VRA-compliant district. There were a few changes to the boundaries in the south around Charleston, including the addition of portions of Berkeley County, but these shifts won’t affect the district’s deep Democratic hue. President Joe Biden would have carried the 6th by 28 points in 2020, and the distinct preferred Democrats by an average of 28.5 points in the 2016-2020 composite. Rep. James Clyburn, the 81-year-old House majority whip, will be entering his 16th term, having held the seat since its creation after the 1990 census. Rating: Solid Democratic.

7th District
Spanning the Pee Dee region, the 7th includes the cities of Florence and Myrtle Beach. The district saw minimal changes and should stay strongly Republican. The district’s average partisanship in the 2016-2020 composite was R+17.9, and it would have voted for Trump by 19 points in 2020. However, Republican Rep. Tom Rice finds himself in a packed primary after he voted to impeach Trump following the Jan. 6 riot. The former president has endorsed state Rep. Russell Fry. Other Republicans running include physician Garrett Barton and insurance agent Barbara Arthur; activist and media personality Graham Allen dropped out in January when Trump backed Fry. Rice still finds himself with a cash advantage exceeding $1 million, but in South Carolina it takes an absolute majority to win a primary, which doesn’t help the incumbent. Winning the GOP primary will almost certainly mean winning the general election. Rating: Solid Republican.

This story first appeared in InsideElections.com on March 10, 2022.