Coronavirus and Campaign Ads: How the Pandemic Is Playing on TV

The attack ad began as many do: ominous music, stock photos of people looking worried, a narrator gravely intoning on the failure of Montana Sen. Steve Daines to protect his constituents’ healthcare.

But this ad, which was produced by Democratic group Protect Our Care and aired on March 12 in Missoula, also did something new: it invoked the coronavirus, making it the first Senate or House TV advertisement to mention the burgeoning public health crisis. 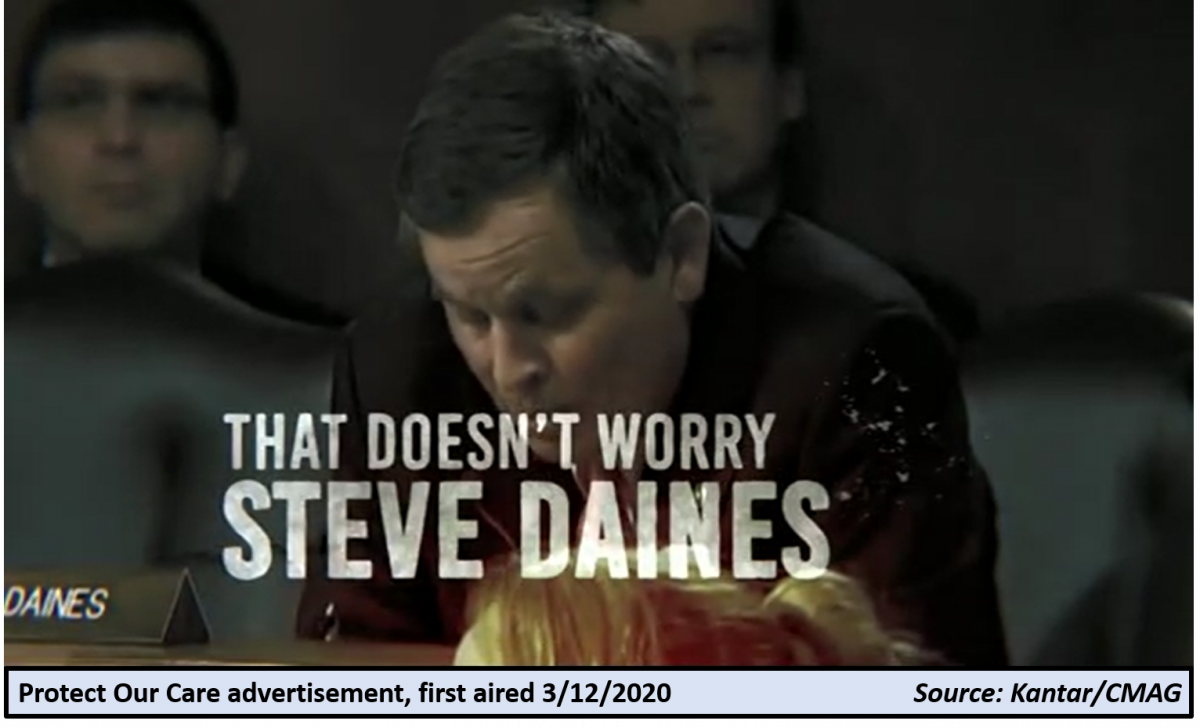 The ad came on the heels of President Donald Trump’s Oval Office address on the pandemic and the suspension of the 2019-20 NBA season, moments now seen as inflection points in the public’s awareness of the virus.

Protect Our Care’s spot only briefly mentioned coronavirus before returning to a more familiar attack on Daines for his votes to repeal the Affordable Care Act. But in the month since, as coronavirus has continued its spread, causing widespread social, cultural, and economic disruption and dominating news coverage, it has also gone from one-liner to the primary focus of political advertisements across the country.

At a time when traditional campaigning is severely curtailed by state and local orders and social distancing, television advertising remains a key method of reaching voters. 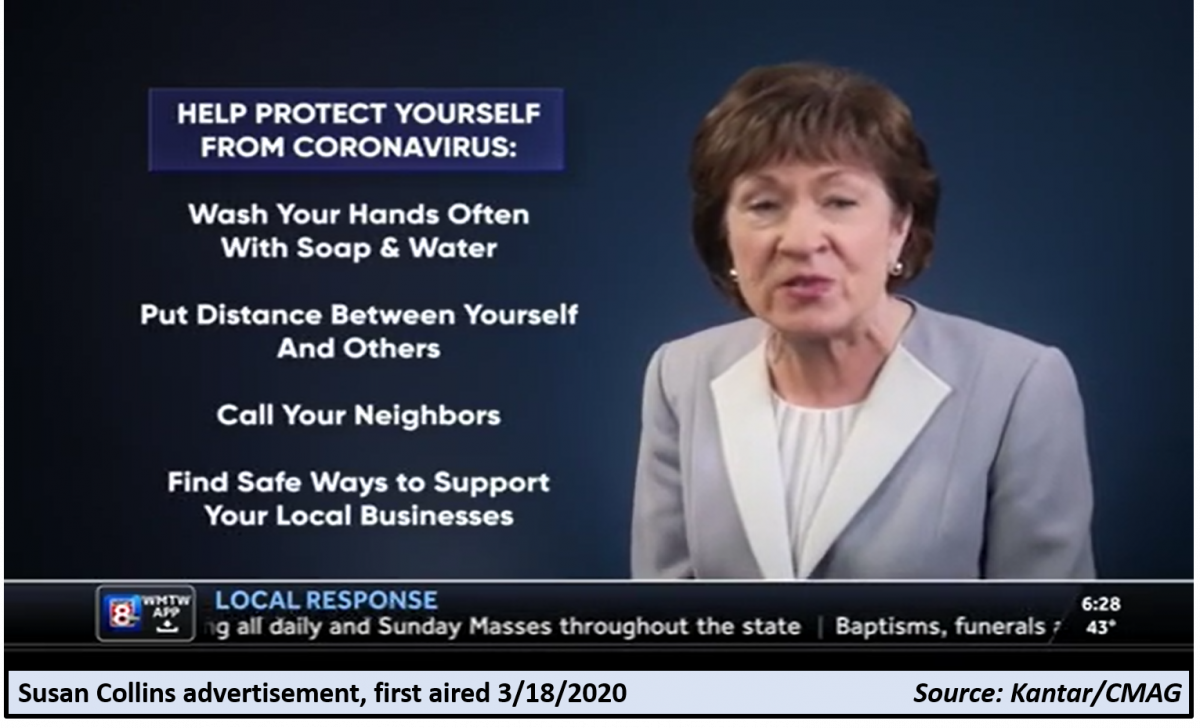 In Maine, GOP Sen. Susan Collins has already aired four TV ads on coronavirus, more than any other incumbent or challenger. Prior to the pandemic, Collins had been airing attack ads against her likely opponent, Democrat Sara Gideon. But her coronavirus ads take a decidedly non-partisan tone, more like PSAs than campaign ads. In two spots, she speaks directly to camera about the virus. In the other two, she heralds the resilience of Maine’s first responders and small business owners.

Gideon, her opponent, has aired one ad on coronavirus, also a direct to camera appeal to Mainers’ resilience. And Majority Forward, a group associated with the Democratic-aligned Senate Majority PAC, aired an ad focusing on the coronavirus relief package passed by the Maine State Legislature, where Gideon is Speaker of the House.

In Kentucky, where Senate Majority Leader Mitch McConnell faces likely Democratic nominee Amy McGrath, the conversation surrounding the virus has been far more partisan. In a pair of ads that aired over the past three weeks, McConnell casts himself as a hero of the coronavirus relief effort and a unifying figure. He highlights his role in securing passage of the $2 trillion stimulus, and accuses McGrath of “using this crisis” for her own political gain.

McGrath also has two ads in rotation. One features her and her children cooped up at home, and advertises her “Commonwealth Common Health” program, which aims to link vulnerable Kentuckians who need assistance to healthy volunteers. The other accuses McConnell of “taking a victory lap” as thousands die and millions are laid off. 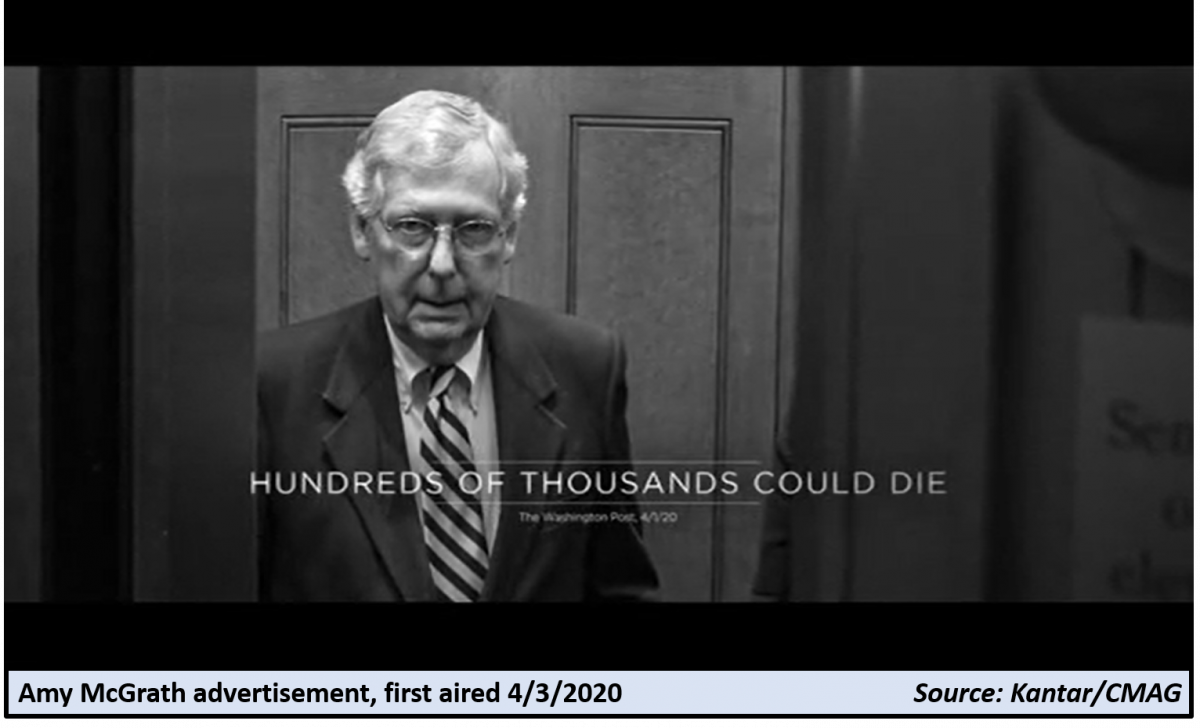 And in Montana, where the first coronavirus ad aired, incumbent Sen. Steve Daines recently released an ad highlighting his own coronavirus relief plan.

These three Senate races will be some of the most expensive contests in the country; Maine and Kentucky already rank in the top five costliest House, Senate, and gubernatorial races.

House
Because of the costs of TV advertising, most House campaigns are not yet on the air, let alone messaging using coronavirus. The notable exception is GOP candidate William “Dr. Fig” Figlesthaler, a Naples, Florida urologist running for the open seat in Florida’s solid Republican 19th District. 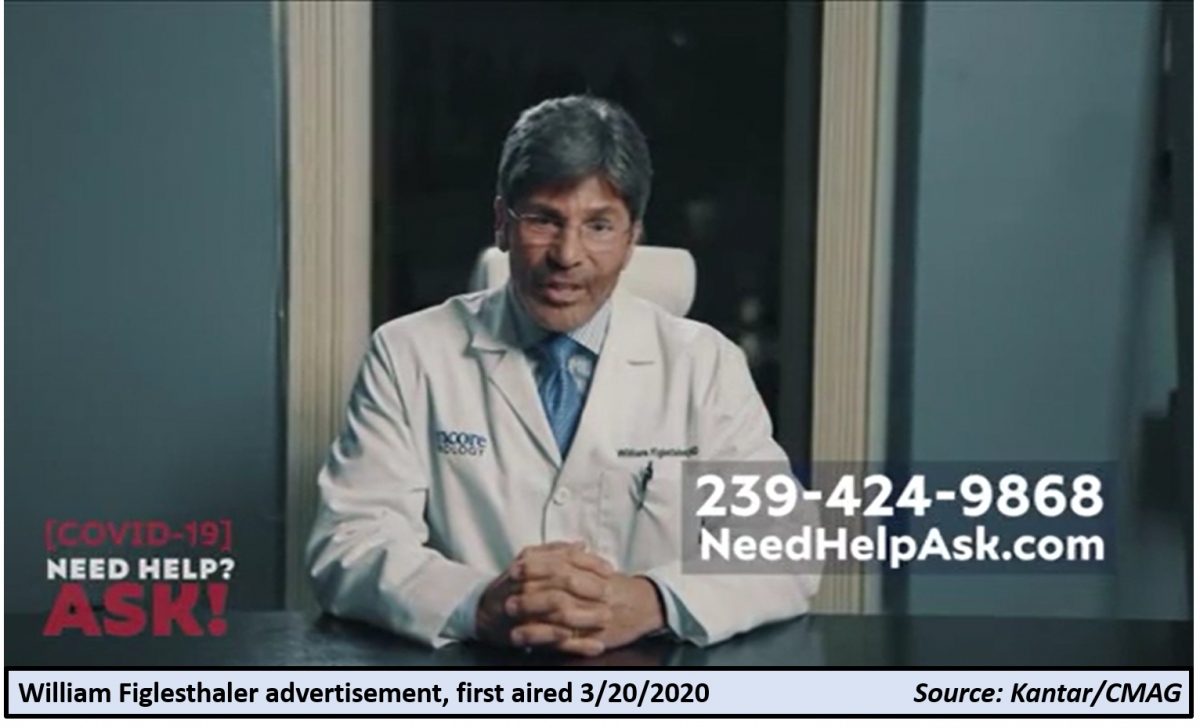 Figlesthaler, who is largely self-funding his campaign, has spent roughly $100,000 on two TV ads over the past two weeks featuring himself in his white lab coat, according to data from Kantar/CMAG. In one, he sits by an ultrasound machine; in the other, he advertises his campaign’s Covid-19 hotline and resource page, which has details on the disease’s symptoms and spread.

Presidential
The presidential race is somewhat paralyzed due to the pandemic, with a zombified Democratic primary lurching toward an obvious conclusion and Trump distracted in the White House. But that hasn’t stopped two major Democratic Super PACs from airing six ads attacking Trump over his response to the pandemic in a $5 million buy over the past three weeks. 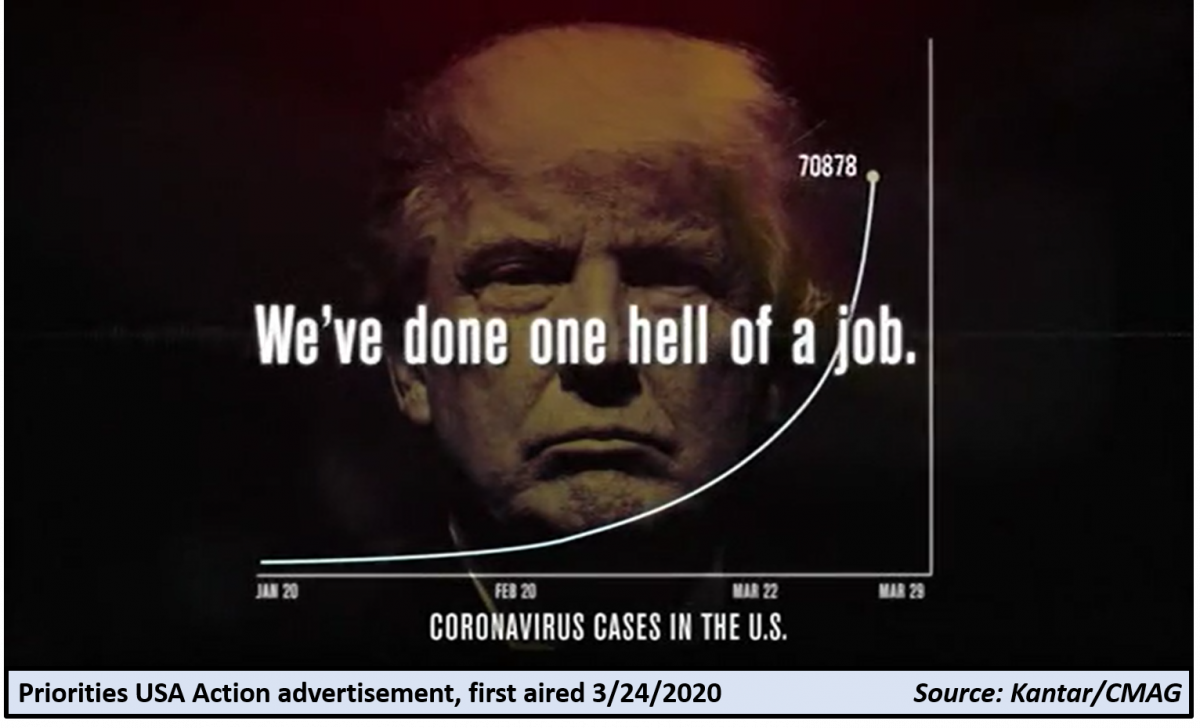 Priorities USA Action and pro-Biden Unite the Country have each aired three ads on the coronavirus. Unite the Country’s ads overlay images of first responders with news reports of the rising death toll and unemployment figures, and contrast Trump’s actions with those of previous presidents who faced crisis.

The ad from Priorities is starker, featuring a chart juxtaposing the exponential rise of Covid-19 cases in the US with quotes from Trump lauding his own performance. It apparently caught the notice of the Trump campaign, which sent several cease and desist letters to TV stations airing the ad, threatening legal action and even a revocation of the stations’ FCC licenses. (Priorities refused to pull the ad.)

This story first appeared in Inside Elections with Nathan L. Gonzales on April 8, 2020.