Ad Watch: Building Back Together Stays the Course

Christopher Sebastian is a Senior Analyst for Kantar/CMAG.

Early last week, Senate Majority Leader Chuck Schumer set a new October 31st deadline for the passage of the remainder of President Joe Biden’s Build Back Better plan, composed of the administration’s proposed infrastructure policies not found in the earlier “American Rescue Plan”. As Democrats continue to debate the proposed bills, one advocacy group closely aligned with the administration faces a challenging environment.

Building Back Together (a 501(c)(4) political organization) was launched in February 2021 as a legally unaffiliated public relations arm for Biden’s push for physical and social infrastructure reforms. While an independent group, those involved with Building Back Together are closely aligned with the administration and have been singularly driven towards the implementation of the president’s goals. By late April they had taken to broadcast, cable, and satellite to run general issue ads supportive of Biden’s policies in key swing states.

As key pieces of Biden’s plan began winding their way through Congress, the group made few changes to their advertising strategy. In May, BBT spent $2.3 million across Arizona, Georgia, Nevada, Pennsylvania, and Wisconsin. In July, the group shifted its focus to Washington, D.C., spending $550,000 in that market by the end of the month. August marked the beginning of the group’s direct intervention in specific Congressional races. 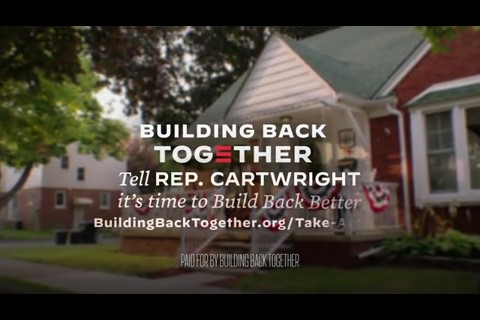 Building Back Together’s “Breakthrough” campaign began on broadcast on August 12th, just two days after Senate Democrats passed the Infrastructure Investment and Jobs Act. This act represented only a partial realization of the administration’s goals – the second part of their proposal, concerning physical infrastructure.

But the battle over the administration’s policy proposals would slow drastically in the lower house of Congress.

As early as July, House Speaker Nancy Pelosi had warned that House Democrats would not pass the Senate’s bill without the inclusion of many of Biden’s proposed social policies, found in the administration’s “American Families Plan.” In response, nine moderate House Democrats (Reps. Josh Gottheimer of New Jersey, Carolyn Bourdeaux of Georgia, Filemon Vela of Texas, Jared Golden of Maine, Henry Cuellar of Texas, Vincente Gonzalez of Texas, Ed Case of Hawaii, Jim Costa of California, and Kurt Schrader of Oregon) published a letter warning that they would not support the party’s attempts at passing portions of the “American Families Plan” through reconciliation, and moderate Sens. Joe Manchin of West Virginia and Sinema signaled that they, too, would be unwilling to vote for the expanded bill.

This was the state of Biden’s signature policy proposal as of August. As Schumer’s stated deadline of October 31st looms, little has changed in the halls of Congress.

This has placed Building Back Together in an odd position. Since February, the group has maintained two core missions. The first, officially stated in their supplemental material, is to promote the Biden-Harris Administration’s Build Back Better plan. The second, unstated but visible in their creative output, is to promote generally the successes of the Democratic caucus ahead of what many are expecting to be a grueling midterm election. 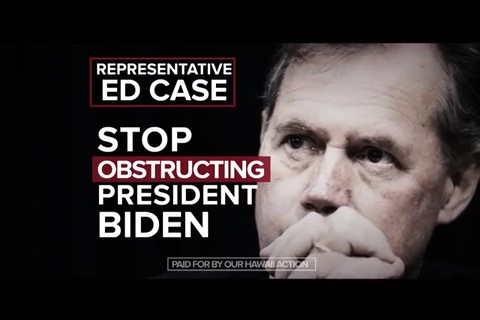 Other PACs less intimately associated with the Biden Administration have been quick to single out moderate Democrats who they believe may impede the passage of the president’s signature legislation. Our Hawaii Action, for example, has been airing ads in Honolulu since late September urging voters to call Case and demand he “stop obstructing President Biden.” Groups such as Environmental Defense Action Fund have been less confrontational but nevertheless driven to air ads in districts that administration allies consider as potentially problematic to the Build Back Better plan. One campaign by Environmental Defense Action Fund, aired in Laredo, Texas in early October, ended by suggesting that Cuellar should “finish the job” – language commonly seen in ads prodding members of Congress to return to the party leadership’s stated platform.

But Building Back Together hasn’t varied in its approach to members depending on how vulnerable they are or whether or not they have vocally criticized the proposed plans. Instead, they have run similar ads in districts likely to be competitive and represented by vocal critics of the policies, like in suburban Georgia, as in districts represented by legislators more amenable to House leadership. 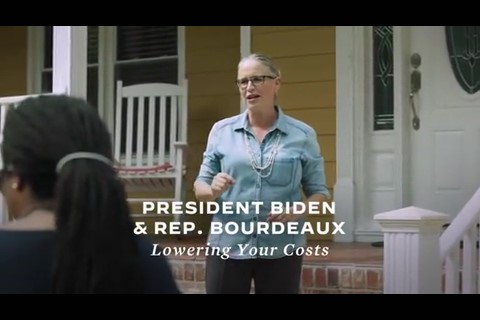 When considering the aims of Building Back Together, it is noteworthy that the group has waded into these waters more tepidly than other outside groups. As the October deadline looms, the Biden-Harris Administration’s closest PAC ally has stayed the course and shown no signs of drastically retooling their ads to more closely align with some of those aired by other progressive organizations. They have also continued to shelve their more generic pro-Biden ads, once common in battleground states across America.

The October 31st deadline set by Schumer draws ever closer and little movement is being made in Washington. But as other progressive PACs continue to retool their voices and tactics in House districts across the country in service of the Build Back Better plan, Biden’s closest PAC ally continues to stay the course.

This story first appeared in InsideElections.com on October 15, 2021.