Nebraska Redistricting: Bacon Not Out of the Frying Pan

For members of Congress who find themselves in politically unfriendly districts, the decennial redistricting process can be an opportunity to shore up their position, either by adding new, more favorable voters, or removing less favorable ones.

But not for GOP Rep. Don Bacon of Nebraska.

The retired Air Force brigadier general has represented the Omaha-anchored 2nd District since he was first elected in 2016, and is one of just nine Republicans to hold a district carried by President Joe Biden in the 2020 election.

Despite Republicans controlling both the Nebraska unicameral legislature and the governor’s mansion, Bacon’s 2nd District won’t be shored up for the incumbent, but will rather remain evenly divided with a slight Democratic partisan advantage in statewide races. That’s because the Nebraska unicameral’s filibuster rules — uncommon in state legislatures — allowed Democrats to block a map that would have radically altered the 2nd.

The end result is a map, passed Sept. 30, that largely maintains each district’s status quo partisanship. Republicans need a net gain of just five seats to reclaim the House of Representatives, and while the GOP has pickup opportunities across the map to focus on, the party won’t have a free pass in Nebraska.

1st District**
For a brief moment in 2020, it looked as if GOP Rep. Jeff Fortenberry might have a competitive race on his hands. A July poll from the DCCC showed Biden within two points of then-President Donald Trump in the district, and Fortenberry went up early on TV with negative ads against his opponent, state Sen. Kate Bolz.

But Trump carried the district by 15 points, 56-41 percent, and Fortenberry dispatched Bolz, 59-37 percent.

In the new map, the 1st District largely retains its shape wrapping around the Omaha metropolitan area. It sheds Thurston, Burt, Washington, Otoe, and part of Polk counties to the 3rd District, and all of Saunders County to the 2nd District. It also picked up some of Sarpy County’s suburbs south of Omaha.

For the moment, Fortenberry’s position is secure despite those shifts. Though Trump’s margin of victory in the new 1st dropped 7 points from his 2016 mark (56-38 percent), Fortenberry overperformed Trump last cycle and no Democrat represents a district Trump carried by more than 7 points. With no announced challengers and a midterm cycle shaping up to be rocky for Democrats, this race begins Solid Republican.

**Update: This article was written before Fortenberry was indicted on three felony charges of concealing information and lying to the FBI about campaign contributions. Ultimately, Republicans should hold the seat, even if it's without Fortenberry.

2nd District
Bacon’s new district had to lose roughly 47,000 residents to meet its target population, but remains anchored by Douglas County (Omaha). The new 2nd extends west to include Saunders County, and gave up several precincts in Sarpy County south of Douglas to the 1st District. Eighty-nine percent of the new district’s residents live in Douglas County.

Bacon has won close races in all three of his elections. In 2016 he ousted Democratic Rep. Brad Ashford by 1 point, 49-48 percent. Two years later, Bacon won by 2 points, 51-49 percent, in a surprisingly close race against Kara Eastman, who had largely been left to fend for herself by DC Democrats after defeating Ashford in the primary. Bacon overperformed both his party’s nominees for governor and Senate. And in 2020, Bacon won a rematch with Eastman, 51-46 percent, a minor upset considering Biden’s definitive victory at the top of the ticket.

The district’s recent tendency to vote for Democrats means Bacon can’t rest on his laurels ahead of 2022. He already has two announced challengers, state Sen. Tony Vargas and 2020 Senate candidate Alisha Shelton, and his district was listed as an initial target by the DCCC.

If Democrats want to buck history and maintain their House majority, they’ll have to win back some districts Biden carried like this one. But while the party has shown the ability to win this district in statewide races, the burden is on them to prove a Democrat can actually win a congressional race, aside from a fluky 2014 result that had more to do with a flawed GOP incumbent (which Bacon is not). The 2nd District begins the 2022 cycle as Lean Republican. 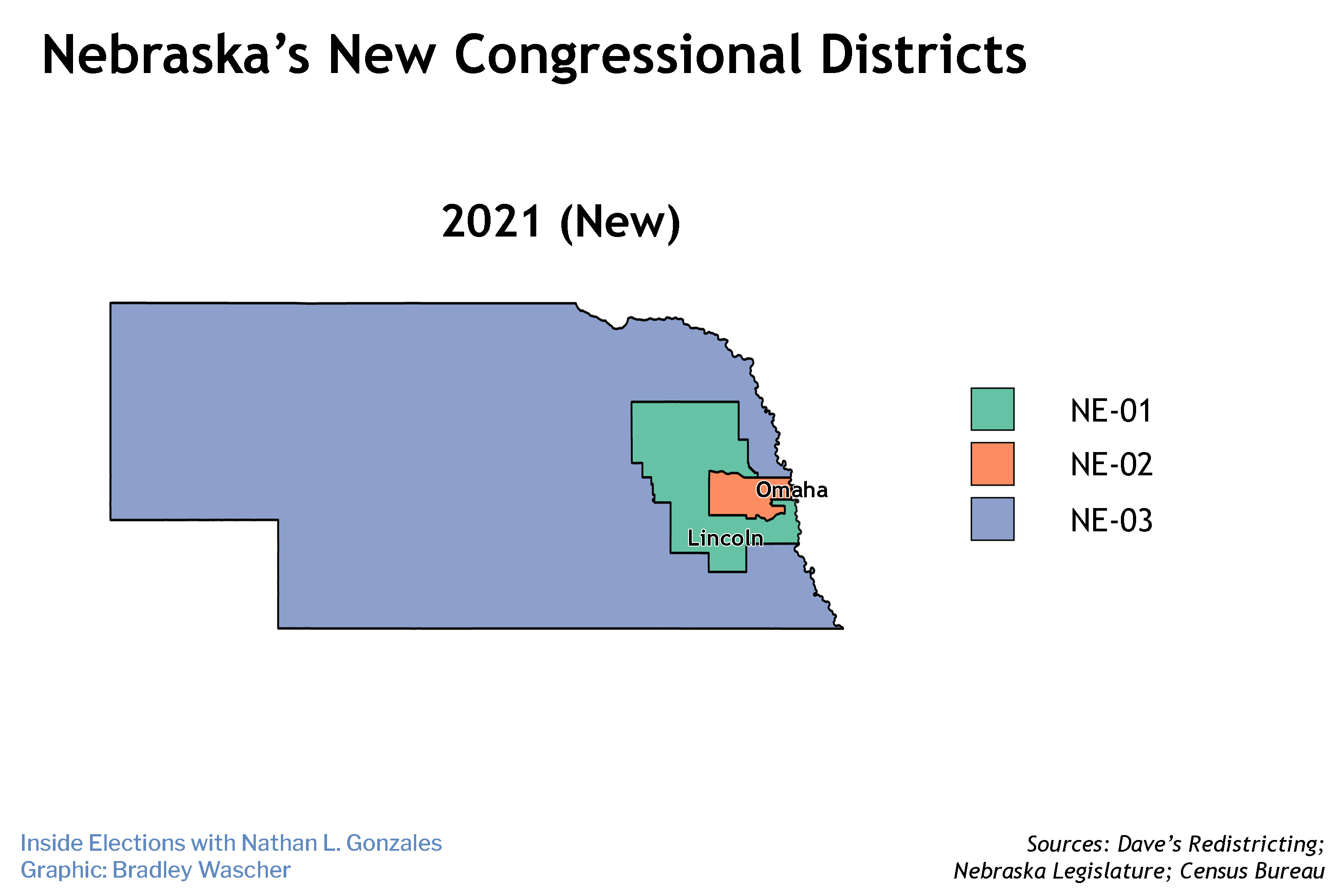 3rd District
GOP Rep. Adrian Smith has represented the 3rd — which spans the vast majority of Nebraska’s land area — since 2006. That’s also the last time Smith had a real race (against Democrat Scott Kleeb) in one of the most Republican districts in the country.

The 3rd was the most underpopulated of Nebraska’s districts. It had to pick up 53,000 new residents; those ended up coming from Thurston, Burt, Washington, and Otoe counties along the Iowa border, and the western half of Polk County, all of which it absorbed from the 1st District.

The partisanship of the district remains largely unchanged. Trump would have carried the new 3rd District by 52 points, 75-23 percent, down slightly from his 76-22 percent victory under the old lines but nothing to make Smith sweat or likely notice at all. The 3rd starts (and probably ends) this cycle as Solid Republican.

This story first appeared in InsideElections.com on October 18, 2021.