On Sept. 27, following a dramatic dispute between members of the Oregon House of Representatives, and just hours before control of redistricting would have shifted to the state Supreme Court, Oregon became the first state to approve a new congressional map for the next decade.

The Beaver State was allocated an additional representative in Congress during this year’s decennial reapportionment, and we now know what the new 6th District, as well as the updated lines for Oregon’s five existing districts, will look like.

A New District
The newly created district — Oregon’s first in four decades — contains the city of Salem, and it also takes in Polk and Yamhill counties as well as portions of Washington and Clackamas counties.

The 6th will likely be one of the state’s more competitive congressional districts.. Across a composite of all federal and statewide elections in Oregon between 2016 and 2020 (12 races in total), the 6th preferred Democrats by an average of 5.3 points. But notably, it would have voted for Hillary Clinton by 8 points in 2016 and Joe Biden by 14 points in 2020, a shift possibly influenced by the fact that Salem’s population has grown by 13.5 percent over the last decade. Given these trends, the district’s rating begins at Likely Democratic.

Former Multnomah County Commissioner Loretta Smith is running (even though she doesn’t currently live in the district). Democratic state Rep. Andrea Salinas of Lake Oswego is considering a bid. And Rep. Kurt Schrader, the Democratic congressman who currently represents part of this district, could run here as well.

Redrawing Old Lines
For Oregon’s five existing congressional districts, drawing new boundaries was a rocky process. The final lines came after a days-long standoff between Democrats and Republicans in the Oregon state House.

Democrats, who effectively held complete control over Oregon’s redistricting process this cycle, initially proposed a map that would have given their party a comfortable advantage in five of the state’s six congressional districts. Republicans, in response, staged a boycott, refusing to appear for a scheduled floor session to take up the maps  and denying the chamber a quorum.

The deadlock was ultimately broken after both parties agreed to Democrats’ second proposal, a compromise map that is likely to protect many of the incumbents in the state’s current 4D-1R congressional delegation.

The 1st District is still situated in west Portland and its suburbs. But the district’s lines have changed slightly, as it now extends more into the city, while also stretching down the northwest Pacific coast by bringing in Tillamook County. These changes should serve to further boost Democratic Rep. Suzanne Bonamici, who wasn’t in much danger anyway. The new 1st preferred Democrats by an average of 31.5 points in a composite of 2016-2020 elections, and it would have voted for Biden by 40 points, making the new lines approximately 11 points more favorable to Democrats than the previous lines. Initial Rating: Solid Democratic. 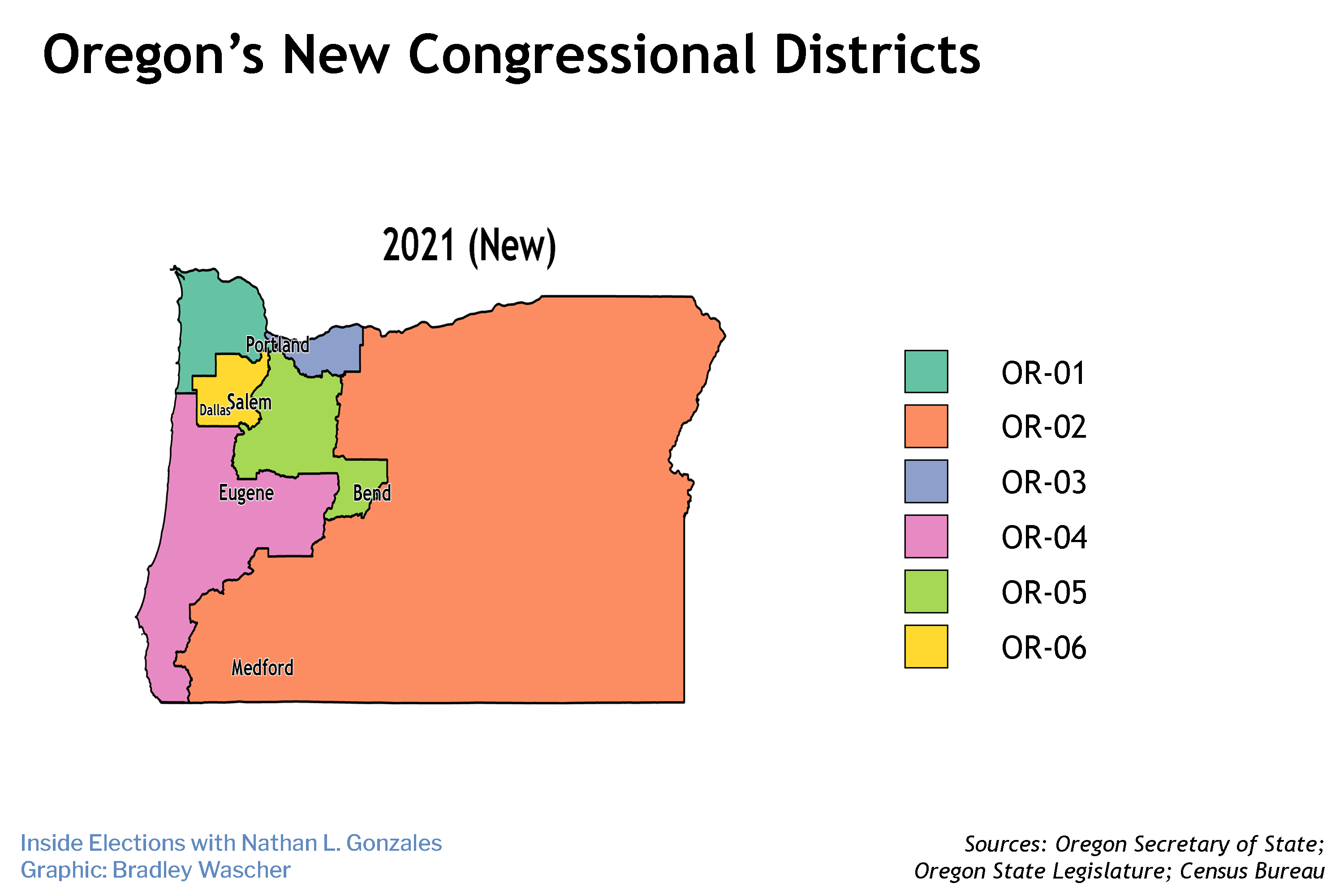 At first glance, the 2nd District’s boundaries have hardly changed. It still takes up most of eastern and southern Oregon — essentially everything east of the Cascades. The most important difference is that the district shed the fast-growing city of Bend. But it still includes Medford, and also now extends more into GOP-friendly Douglas County. Consequently, freshman Republican Rep. Cliff Bentz will have little difficulty seeking a second term in this district that was R+25 in the 2016-2020 average and that preferred Donald Trump by 24 points in 2020 (meaning the new 2nd is approximately 10 points more Republican compared to the old lines). Initial Rating: Solid Republican.

The 3rd District, which contains the eastern portions of Portland and its suburbs, is also largely similar to its previous configuration. The 3rd has ceded part of its reach into the city, but at the same time it takes in Hood River County. Put simply, Democratic Rep. Earl Blumenauer doesn’t have much to worry about in this Biden +47 district that voted for Democrats by 42.7 points across an average of all federal and statewide elections in Oregon between 2016 and 2020. Initial Rating: Solid Democratic

The 4th District is still home to the city of Eugene (and the Univ. of Oregon) and Corvallis (Oregon State Univ.). The district continues to duck into southwest Oregon along the Pacific Coast, but has traded Linn County for Lincoln County in the north. If anything, these changes should shore up Democratic Rep. Peter DeFazio, who earned just 52 percent in 2020, his lowest share since first being elected to the seat in 1986. Alek Skarlatos, the 2020 GOP nominee, announced his second campaign before the lines were finalized. While the political environment might be better for Republicans than last year, the district is more difficult. The new 4th averaged D+9.2 in the composite of 2016-2020 races, and it would have voted for Biden by 13 points last November, compared to Biden +4 for the old lines. Initial Rating: Likely Democratic.

The 5th District had its boundaries heavily redrawn, and has essentially swapped out Salem for Bend. The new 5th now begins in the eastern half of the Willamette Valley, having been cut down the middle to make way for the new 6th District. To balance this out, the 5th also now extends south into Linn County, and east into parts of Deschutes County. But these differences are unlikely to pose much of a new challenge for Democratic Rep. Kurt Schrader, who was re-elected to a seventh term by 7 points in 2020. Although the 5th would have only voted D+3.2 in a composite of 2016-2020 elections, it preferred Biden by nearly 10 points and Democratic Sen. Jeff Merkley by 11 points in 2020  — suggesting that redistricting has not altered the district’s overall partisanship. One standing question, however, is whether Schrader chooses to run here or in the new 6th District, which now contains Salem. He will have to make that decision eventually, but this seat’s rating starts at Likely Democratic.

The Bottom Line
After just narrowly missing out on an additional seat following the 2011 census reapportionment, Oregon has finally expanded the size of its congressional delegation to six members.

Democrats had hoped to use their control of the redistricting process to draw an aggressive map and pad their majority. But Republicans managed to shoot that down, at least somewhat: while the new 6th District would be among the state’s most competitive, having the city of Salem as an anchor means any Democrat running in the district would probably start with an advantage.

Pair this with five incumbents who are well-positioned for re-election should they choose to seek it, and it seems likely that Oregon will send five Democrats and one Republican to the House after 2022.

This story first appeared in InsideElections.com on October 14, 2021.