While Michigan’s new congressional map looks even on paper, the final results could be skewed toward Republicans, thanks to a positive political environment.

Currently, the Michigan congressional delegation is evenly divided, with seven Democrats and seven Republicans. But that won’t be the case for much longer, as the state lost a congressional seat during the decennial reapportionment process due to sluggish population growth, dropping from 14 representatives to 13 (down from a peak of 19 seats in 1980).

And following Michiganders’ approval of a redistricting initiative in 2018, the new congressional map was drawn by an independent commission rather than the state legislature.

Unlike most other independent commission states, Michigan relied largely on random selection to choose its commissioners (four Democrats, four Republicans, and five unaffiliated voters). While the commission had some stumbles early on, it ultimately approved a map with eight votes — two Republican, two Democratic, and four unaffiliated — that reflects the state’s closely divided partisanship.

But in the immediate term, with an unpopular Democratic president in the White House, Democrats could see a net loss of as many as two seats, complicating the party’s already-narrow path to retaining its slim House majority.

All population redistribution figures are courtesy of Daily Kos Elections. 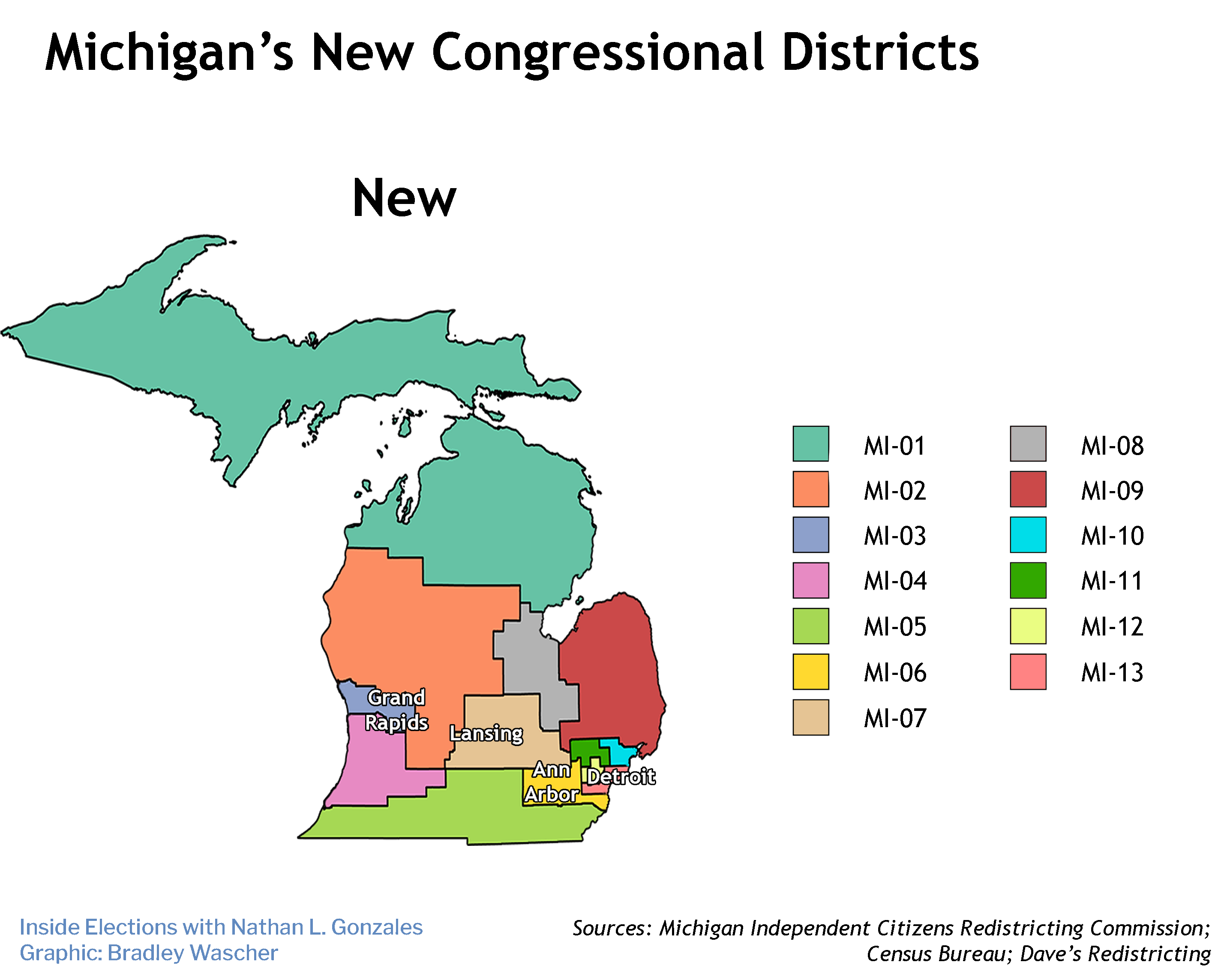 1st District
The 1st District is still the entire Upper Peninsula, though it extends slightly further downstate. Trump would have carried it, 59-39 percent. Democratic candidate Bob Lorinser has a compelling background as a physician and foreign service officer but won’t be competitive against incumbent Republican Jack Bergman. Solid Republican.

2nd District
The new 2nd district is a mashup of the old 2nd, 3rd, and 4th Districts, stretching from the Lake Michigan coast east to just outside Midland, and wrapping south around Grand Rapids to Barry County, just north of Kalamazoo. Around 42 percent of the new district’s residents reside in the old 4th District, while 30 percent come from the old 3rd and 23 percent from the old 2nd. Current 4th District Rep. John Moolenaar, a Republican, is running here and shouldn’t have any trouble given that Trump would have carried the seat, 63-35 percent. Solid Republican.

3rd District
The 3rd District is still anchored by Grand Rapids, which it now includes completely. But instead of extending south through Calhoun County, the 3rd now extends west to Lake Michigan, through Ottawa County (excluding Holland) and north to grab Muskegon.

Unlike the old 3rd District, which Trump carried by 3 points, the new 3rd would have voted for Biden by 8 points, 53-45 percent. That makes it Democrats’ best pickup opportunity on the new map.

Republican incumbent Peter Meijer is facing heat from both sides of the aisle. The freshman congressman drew Trump’s wrath after voting to impeach the then-president in early 2021, and Trump has endorsed a primary challenger against Meijer: former acting assistant secretary of Housing and Urban Development John Gibbs. Several other Republicans are challenging Meijer as well, including immigration attorney Gabrielle Manolache, 2020 3rd District candidate Tom Norton, and Audra Johnson, a GOP activist who went viral for her MAGA wedding dress.

Whoever wins the nomination will also face a competitive general election due to the partisanship of the district. 3rd District Democratic nominee Hillary Scholten told Inside Elections she is “taking a very, very hard look” at running in the redrawn district. She lost to Meijer, 53-47 percent. Grand Rapids state Sen. Winnie Banks is not running.

Meijer is a strong candidate. A telegenic Army veteran who broke publicly with Trump, who has endless personal resources and the benefit of his family’s name plastered on supermarkets across the region, he’d be the GOP’s best bet at keeping this seat in Republican hands despite the unfavorable partisan lean. But he’ll have to make it through his primary first, and even then he’ll have a competitive general election. For now, this race is a Toss-up.

4th District
The new 4th District sits south of Grand Rapids, running along the coast of Lake Michigan from Benton Harbor up to Holland, and east to Battle Creek.

Upton has not yet said if he will seek re-election to what would be his eighteenth term. The former Energy and Commerce Committee chairman was already facing a Trump-backed primary challenge from state Rep. Steve Carra because of his vote to impeach Trump in early 2021. Now that Huizenga, who has a closer relationship to Trump than Upton does, is running here, it is not clear what Trump will do.

The new 4th would have voted for Trump by 4 points, 51-47 percent, a similar partisanship to Upton’s old seat. In a good year for the GOP, they should not have to worry about holding this seat no matter the nominee, but in a less favorable environment this seat could be competitive, as it was in 2018 — especially if the moderate Upton is no longer around. Solid Republican.

5th District
The new 5th District runs the length of the bottom of the state. Of its residents, 65 percent were previously in GOP Rep. Tim Walberg’s old district and 30 percent were in Upton’s old district. Walberg is running here and should have a clear path because the district would have backed Trump, 61-37 percent. Solid Republican.

6th District
The new 6th District is centered on Ann Arbor, home to the University of Michigan, and also includes suburbs south of Detroit. Although Rep. Debbie Dingell’s Dearborn home was drawn out of the district, a majority of the new constituency is currently represented by the Democratic congresswoman, and she will run here this year. The district voted for Biden, 62-36 percent. Solid Democratic.

7th District
Democratic Rep. Elissa Slotkin currently represents the Lansing-based 8th District and will run in the new Lansing-based 7th District, though it no longer includes her home in Oakland County and instead includes all of Shiawassee and Clinton counties to the north and most of Eaton County to the west. Sixty-two percent of the new district’s residents are already represented by Slotkin in Congress.

Slotkin is a formidable incumbent. She reported $3.8 million in the bank on Sept. 30, and has raised around $1 million every three months this year, a ferocious pace. She also outperformed the top of the ticket in 2020 by beating her opponent, 51-47 percent, while Biden was losing by 1 point. Tilt Democratic.

Democrat Dan Kildee will seek re-election here, though he’ll face a competitive general election, given that Biden would have carried the new district by just 2 points, 50-48 percent. Republican Paul Junge, a former Immigration and Customs Enforcement official and Fox47 news anchor who lost the 2020 8th District race to Slotkin, is running.

9th District
The new 9th is the successor district to the old 10th District and is situated in the “thumb” of Michigan’s mitten. Freshman Republican Lisa McClain already represents 71 percent of the new district and looks to be set for a second term, as Trump would have carried this seat, 64-35 percent. Solid Republican.

10th District
The new 10th District includes the southern half of Macomb County plus Rochester and Rochester Hills in Oakland County. It would have voted for Trump by a narrow 50-49 percent margin, a serious shift from the previous southern Macomb district (the old 9th), which voted for Biden, 56-43 percent.

Most of Democratic Rep. Andy Levin’s current constituents live in the new 10th District, but he’s planning to run in the 11th, making the 10th an open seat and a prime pickup opportunity for Republicans in the Detroit suburbs.

One Republican is already in the race: attorney Erik Esshaki, who was the 2020 nominee for the 11th district, losing 50-48 to Democratic Rep. Haley Stevens. But GOP establishment favorite John James, who lost back-to-back Senate races in 2018 and 2020 but is beloved by Republican strategists in DC, is seriously considering running here as well. If he does, it’s not clear if Esshaki will stay in the race.

Democrats need a candidate now that Levin is running elsewhere. Former state Sen. Steve Bieda, who briefly ran against Levin in the 2018 Democratic primary, could run.

For now, Republicans have to be seen as having an advantage in an open seat that Trump carried, even narrowly. Though this district does have serious Democratic DNA, and Democratic Sen. Gary Peters actually carried the district in 2020 even as Biden lost it, despite doing worse than Biden statewide. Tilt Republican.

Lawrence is retiring from Congress. Both Stevens and Levin are running in the new 11th District, setting up a clash between the scion of a Michigan Democratic dynasty (Levin), and a poster child of the “blue wave” that swept Democrats back to power in 2018 (Stevens).

Levin is a favorite of organized labor, while Stevens has been endorsed by organizations including End Citizens United. She may also be able to count on support from EMILY’s List, which has already waded into another member vs. member primary, in Illinois’ 6th District.

The new 11th would have voted for Biden by 20 points, 59-39 percent, so the winner of the primary will almost certainly head back to Congress. Solid Democratic.

12th District
Rashida Tlaib’s downtown Detroit district was split in two, with about 61 percent of its residents put into the new 12th and 39 percent put into the new 13th. The new 12th includes western Detroit, Southfield, Livonia, Westland, and Dearborn. Tlaib is running here.

Biden would have carried the new 12th, 74-25 percent, so Tlaib’s only vulnerability would come in a primary. The controversial Squad member could draw a challenge, especially from a politician in Dearborn or Southfield, which are new territory for her. But Tlaib convincingly beat back a primary challenge in 2020 from former Rep./Detroit City Council President Brenda Jones and does not have an opponent yet. Solid Democratic.

13th District
The new 13th district is eastern Detroit plus suburbs south of Dearborn, and includes parts of the old 12th, 13th, and 14th districts.

Along with the new 12th, the 13th is at the center of a Voting Rights Act lawsuit filed by, among others, a caucus of Detroit-based state legislators, that alleges the new map dilutes the voting power of Black Michiganders. Under the old map, the Detroit area’s substantial Black population was concentrated in the 13th and 14th Districts, both of which were majority Black and generally elected Black representatives. Under the new map, the metro area’s Black population is spread across several districts so that none of them are majority Black; the new 12th is 46 percent Black and 47 percent non-Hispanic White, and the new 13th is 47 percent Black and 40 percent White.

With Reps. Dingell and Tlaib running in other seats, and Lawrence retiring, this is an open seat. Biden would have carried the district, 74-25 percent, so the Democratic primary nomination is the real contest.

There are two announced candidates: former state Rep. Sherry Gay-Dagnogo and state Rep. Shri Thanedar, who spent $10.6 million of his own money on a quirky campaign for governor in 2018 (he placed last in the Democratic primary, won by Whitmer). But more will almost certainly follow. Solid Democratic.

This story first appeared in InsideElections.com on January 13, 2022.