On Monday, Democrats Raphael Warnock and Jon Ossoff released a joint memo “sounding the alarm” that their campaigns were at risk of failure if they didn’t raise more money. The memo warned that the two candidates, whose victories would hand control of the Senate to the Democrats, were being swamped by a “tsunami” of Republican money.

That same day, Republican Sen. Kelly Loeffler, Warnock’s opponent in one of the two January 5 Senate runoffs, ran a Facebook ad saying she was “at serious risk of being outraised by the Radical Left.” 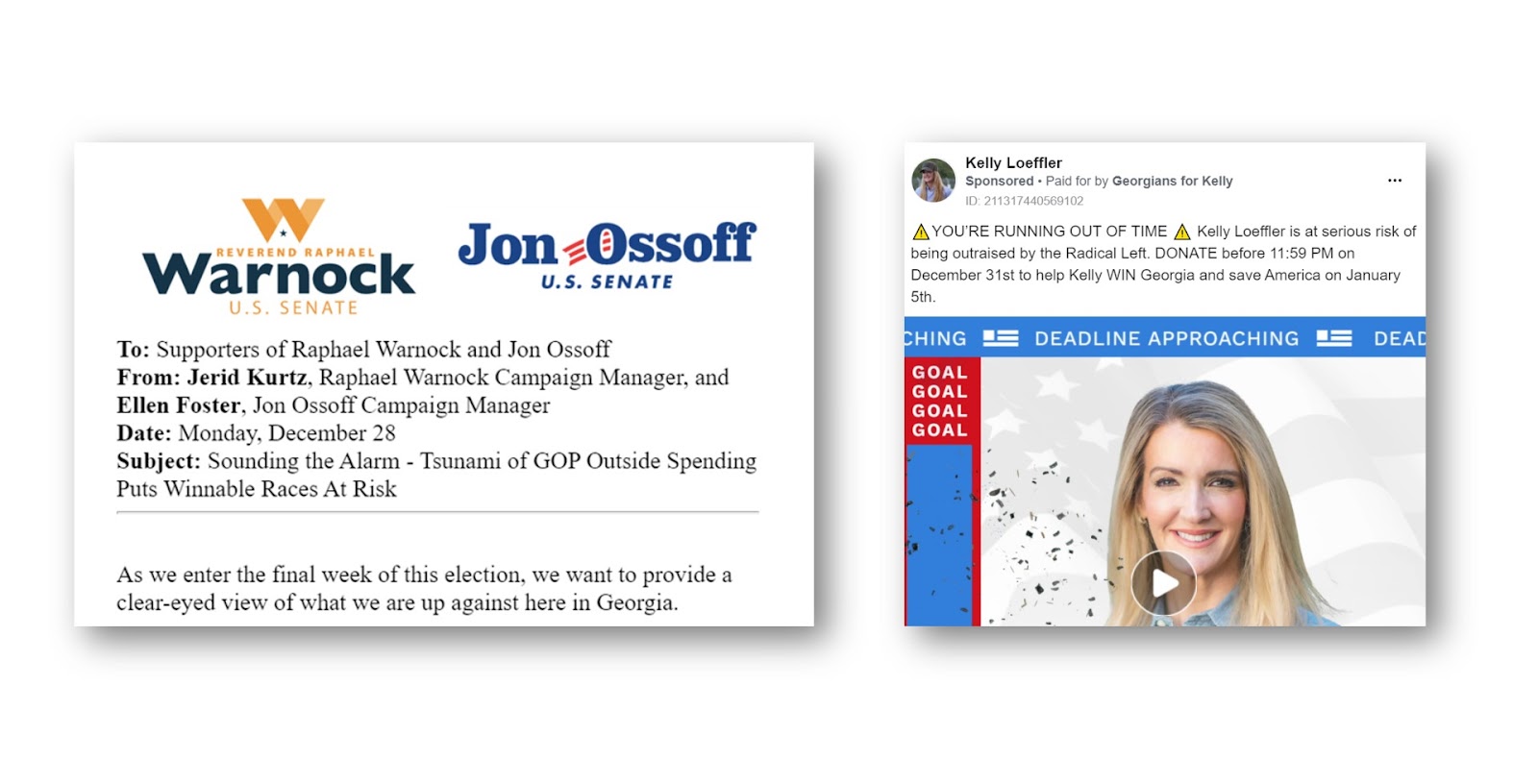 Could both be true? Could both sides be losing the fundraising battle in what are shaping up to be two of the most expensive Senate races in history?

The short answer is: yes. The longer answer is, as it often is when it comes to campaign finance, more complicated. Depending on the metric, both sides can plausibly lay claim to being outspent or otherwise outgunned financially.

Candidate Fundraising
Georgia’s two runoff elections have already attracted more than $500 million in advertising spending across TV, radio, and digital outlets, according to media research firm Kantar. Even without accounting for the tens of millions of dollars spent by outside groups on non-advertising electioneering, that places both near the top of the most expensive Senate races in history.

Warnock and Ossoff both smashed fundraising records when they each reported raising roughly $100 million from Oct. 15 to Dec. 16. Ossoff is now the all-time fundraising leader among Senate candidates, with $139 million in total receipts this cycle, and Warnock is close behind with $125 million.

Loeffler and Perdue raised $92 million and $89 million, respectively, through Dec. 16, making them the second and third-biggest fundraisers of any Republican Senate candidates ever (Loeffler’s total includes $23 million of her own money).

So on the metric of direct candidate fundraising, Democrats are significantly outpacing their Republican opponents: Ossoff led Perdue by $40 million, and Warnock led Loeffler by $33 million, through the middle of December.

Outside Spending
But the four candidates are not the only players in the two elections. As of Dec. 29, more than 150 outside groups have combined to spend more than $271 million on electioneering in the Georgia runoffs, according to reports filed with the Federal Election Commission. Of that total, $182 million has come from Republican-aligned groups, while just $89 million has come from Democratic-aligned groups. That difference of nearly $100 million is the “tsunami” of Republican money Ossoff and Warnock warned about in their Monday memo.

The Advertising Breakdown
The spending disparity between the two parties is most evident in advertising.

That gap is largely driven by broadcast TV advertisements. Republicans have poured $208 million into broadcast TV, compared to Democrats’ $149 million.

Of the $357 million directed toward broadcast TV advertising, $166 million is coming from the four candidates while $190 million comes from outside groups.

But among the candidates, Ossoff and Warnock are outspending Loeffler and Perdue by $38 million; the two Democrats combine for $102 million while the Republicans combine for $64 million.

What Does It All Mean?
Scaremongering in service of fundraising is a time-honored, bipartisan strategy that has only grown more widespread in the online era. The complexities of campaign finance in the post-Citizens United world create ample opportunities for campaigns to portray themselves as struggling or in need of emergency donations.

And scaremongers or otherwise, the four Georgia Senate candidates have largely succeeded in directing massive sums of money to their coffers, and outside groups have largely followed suit.

But a word of caution when marvelling at the records being broken in these two races: 2020 saw a whole host of Democratic Senate candidates smash fundraising records on their way to disappointing defeats at the ballot box. In fact, according to the Center for Responsive Politics, 2020 saw the fewest number of Senate races won by the top-fundraising candidate since at least 2000. After 2010 (81 percent), 2012 (76 percent), 2014 (78 percent), 2016 (85 percent) and 2018 (83 percent), just 72 percent of Senate contests were won this year by the candidate who raised the most money.

This story first appeared in InsideElections.com on December 30, 2020.