In April it was written, and in October it was sealed. 2022 will see at least one member-vs.-member House race.

Back in the spring, census data confirmed that West Virginia’s population had shrunk 3 percent since 2010, and that it would lose one of its three congressional districts in the reapportionment process.

With three incumbent representatives and just two districts to run in, the prospect for a member-vs.-member election was high from the start. But uncertainty remained: what would the districts look like, and would all three members run for re-election?

GOP Gov. Jim Justice signed the new congressional map into law on Oct. 22, and now we have answers to both of those questions. The state will be split into a northern district encompassing the Northern and Eastern panhandles, and a southern district encompassing Charleston and the bottom half of the state. (That was always the likeliest outcome, as Inside Elections wrote back in April.)

And all three incumbents are running for re-election, setting up the first clash of colleagues of this redistricting cycle, between McKinley and Mooney.

Both new seats are Solid Republican, but so were all three old seats. That means West Virginia’s loss of a seat is also a loss for the House GOP caucus. Republicans need a net gain of just 5 seats to reclaim the House majority, and while historical trends indicate they’re likely to exceed that mark, losing a reliable seat in West Virginia means they’ll have to win an extra one elsewhere to compensate.

The 1st District
The new, southern 1st District is anchored by the old 3rd District, which was the least populated of the three at just 570,5491 residents and had to pick up 325,476 new residents to meet its target population. 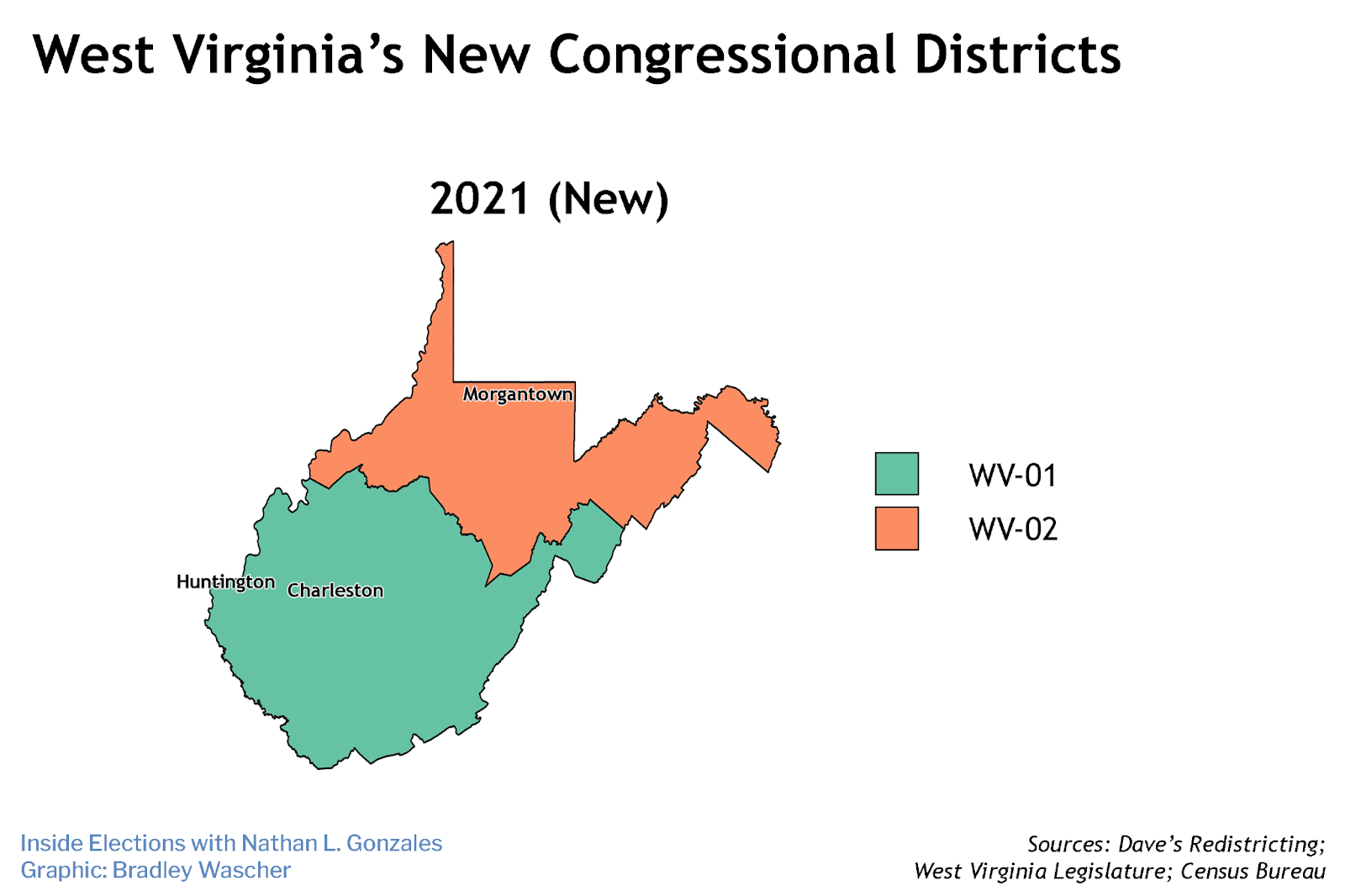 Any danger for Miller, the second-term representative from Huntington, would come in a GOP primary. To the extent that she’s vulnerable, it would be from a Charleston-based candidate with a base in the 25 percent of the district that’s new to Miller, but no such challenger has emerged. Miller had just $120,000 in the bank on Sept. 30 but is personally wealthy and could quickly ramp up a campaign if she needed to.

Miller faced a competitive general election as recently as 2018, but that was a combination of an open seat, a great year for Democrats, and a uniquely strong Democratic candidate — and she still won by 13 points. In 2022, this district starts as Solid Republican.

Geographically, the district is nearly all of the old 1st District plus the eastern half of the old 2nd District.

Both McKinley, 74 years old and in his sixth term in the House, and Mooney, 50 and in his fourth term, have said they will run to represent the new district.

Mooney had long signaled he would run for re-election no matter what, and is widely believed to be planning a 2024 Senate run. McKinley took longer to make his plans known, and could have chosen to retire or run for governor in 2024.

At first blush, McKinley benefits from having previously represented more of the district than Mooney. But while that may be an advantage, it is not an overwhelming one. McKinley’s political base in the Ohio River Valley is, like much of the industrial Midwest, on the decline in population and economic and political power. Mooney, meanwhile, hails from the only part of the state that is growing, and his politics are more in line with today’s Republican Party. Mooney also had four times as much money in the bank ($2.8 million on Sept. 30) as McKinley did ($628,000).

And while McKinley already represents populous Monongalia County — home to Morgantown and West Virginia University, and where Joe Biden came the closest to winning any county in the state — he doesn’t have particularly strong ties to the area. Neither does Mooney.

A McKinley-Mooney matchup would be a stark competition for what it means to be a West Virginia Republican. McKinley traces his West Virginia roots back seven generations and was deeply involved in GOP politics back when the state was dominated by Democrats. Mooney moved to the state in 2013 after serving in the Maryland state legislature and chairing the Maryland Republican Party.

McKinley is a low-key member of the House GOP caucus who voted against objecting to  Biden’s electoral college victory, talks up his bipartisan legislative achievements, and in 2016 called himself a “Kasich guy” referring to Ohio Gov. John Kasich, the more moderate Republican then running against Trump in the 2016 GOP P primary.

Mooney is a member of the conservative Freedom Caucus, voted against certifying Biden’s victory, and keeps his name in the headlines far more than McKinley — though not always for the best of reasons, like when the House Ethics Committee found he may have illegally used campaign money for personal purposes. (The most news McKinley made recently was when he got into a spat on the House floor with North Carolina Rep. Madison Cawthorn, who accused him of being old and out of touch.)

The Bottom Line
The ascendancy of Trump buoyed the more bombastic elements of the GOP. Trump is no longer in the White House and not on the ballot, but is still the de facto leader of the party. While party leadership, especially in the House, has made clear they’re still the party of Trump, voters haven’t had many chances to make their own preferences heard since the 2020 election. It remains an open question how well candidates who emulate Trump’s style of politics will do in party primaries. Contests in Alabama, Ohio, North Carolina, and here in West Virginia’s new 2nd District will help determine the direction of the party moving forward.

While both McKinley and Mooney say they’re running, there is always the possibility one of them decides not to go through with what could be a grueling campaign between colleagues. The state has a relatively early filing deadline, Jan. 29, so next quarter’s fundraising reports will offer another clue as to how seriously each is preparing for a clash.

This story first appeared in InsideElections.com on October 27, 2021.