Montana Redistricting: Back Two the Future

When Montana was assigned an additional congressional district earlier this year, it didn’t just double its representation in the U.S. House. It made history, with Big Sky Country becoming the first state ever to bounce back to multiple members after previously being reduced to one at-large district.

Montana lost its second House district after the 1990 Census. But two decades of population growth — fueled in large part by West Coast transplants — led the state to reclaim its second district following the 2020 Census.

An independent commission, made up of two Democratic appointees, two Republican appointees, and one tie-breaking chairperson appointed by the state Supreme Court, was charged with drawing the state’s new congressional map.

As expected, all of the maps seriously considered by the commission picked up the 20th century tradition of dividing the state into an eastern district and a western district.

The western half of the state has long been friendlier to Democrats than the eastern half. Heading into the process, the biggest unknown was just how favorable to Democrats the new western district would be.

Republicans were incensed when the state Supreme Court selected tribal attorney Maylinn Smith to be the commission’s chairwoman, decrying her as a biased partisan because she had previously donated money to Democratic candidates. But in the end, Smith cast her tie-breaking vote for the map proposed by the commission’s Republican members, rather than the Democratic-proposed alternative.

That map was formally adopted on Nov. 12. It creates a solidly Republican district in the east, and a more divided district in the west. Given that Republicans will likely enjoy a good political environment in 2022, the western district may not be immediately competitive, but could be a pickup opportunity for Democrats later in the decade.

1st District
The new 1st District occupies Western Montana, the mountainous region west of the Continental Divide. It spans the entire border with Idaho and at its northern end it extends eastward through Glacier County and the parts of Pondera County that house the Blackfeet Indian Reservation.

From there it cuts back westward, to the left of Lewis and Clark and Jefferson counties. That means it includes neither Helena, the state capital, nor Great Falls, both constituencies where Democrats can overperform.

Finally, the district swoops back eastward to pick up Gallatin County, home of Bozeman, the burgeoning tech hub that accounts for much of the state’s growth over the past decade.

The unadopted Democratic proposal would have put Helena and Park County — the Democratic-friendly northern entrance to Yellowstone National Park — in the western district as well.

Politically, the new 1st District leans Republican, but by about 9 points less than the state as a whole. In 2020, President Donald Trump would have carried it by 7 points, 52-45 percent, compared to his 57-41 percent statewide margin (under the Democratic proposal, it would have backed Trump by just under 4 points). In last year’s Senate race, incumbent Republican Steve Daines would have just narrowly eked out a 1.2-point win over Democrat Steve Bullock despite winning by 10 points statewide. And according to calculations from my colleague Bradley Wascher, Republican Matt Rosendale would have carried the new 1st District by 5 points in the 2020 House race.

Three Democrats are running for the seat: nonprofit executive Cora Neumann, attorney/2020 Public Service Commission nominee Monica Tranel, and former state Rep. Tom Winter. A fourth, state Rep. Laurie Bishop, dropped out of the race after her home was not included in the final map. 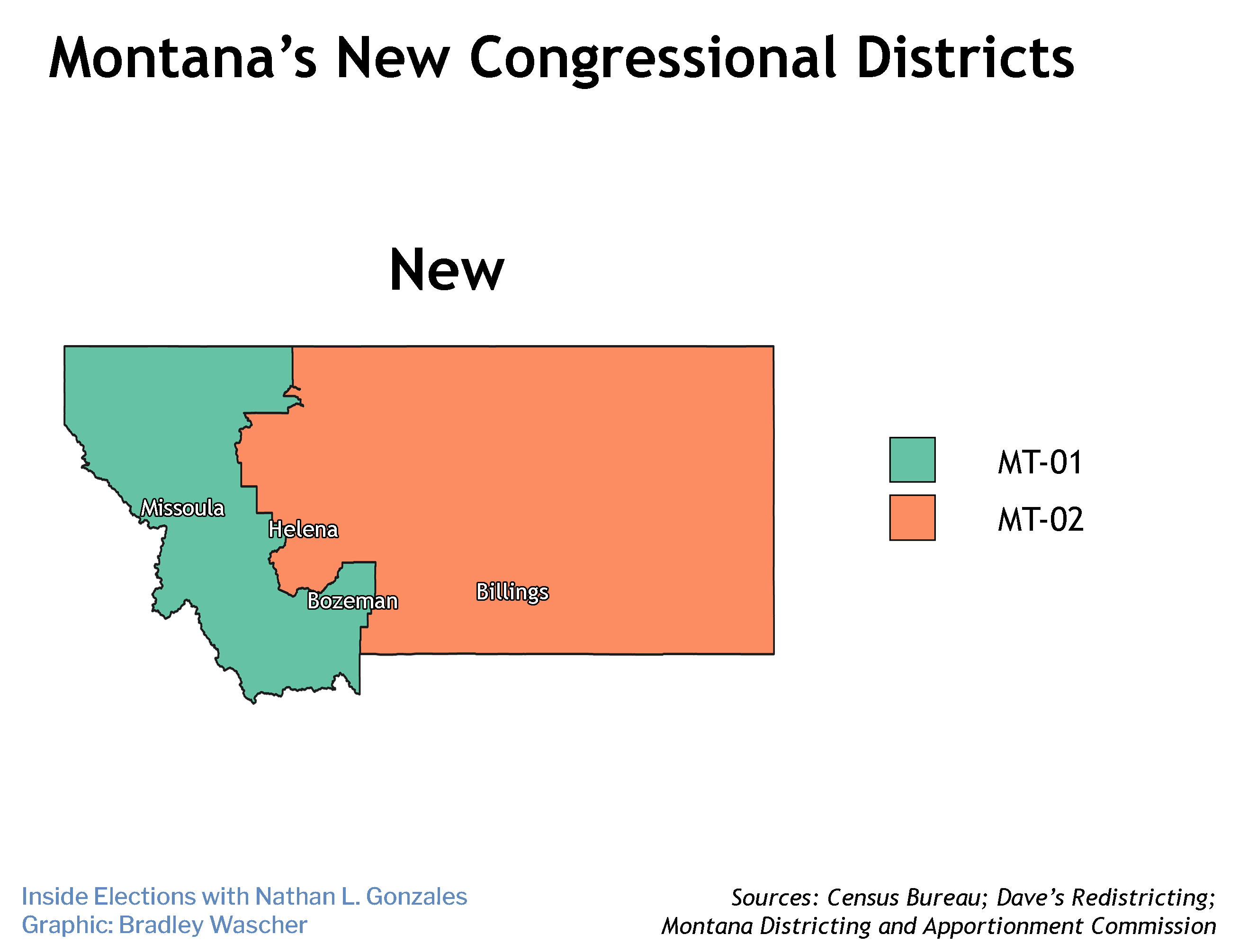 Neumann, who briefly ran for Senate in 2020 but dropped out when Bullock entered the race, is the fundraising leader and had $475,000 in the bank on Sept. 30. Tranel is a former Olympic rower who has an endorsement from former Gov. Brian Schweitzer, and had $150,000 in the bank. Winter previously ran for the state’s at-large seat but lost the Democratic primary by a 79-point landslide. He joined the race after the latest FEC filing deadline.

On the Republican side, the frontrunner is former Interior Secretary Ryan Zinke, who previously held Montana’s at-large seat from 2015 to 2017, when he joined Trump’s cabinet. Zinke will face former state Sen. Al Olszewski but is heavily favored. Olszewski, an orthopedic surgeon, recently placed last in GOP primaries for Senate (in 2018) and governor (in 2020), and Zinke has an endorsement from former President Trump.

Montana has a history of split-ticket voting, Zinke has some vulnerabilities stemming from ethics issues while a cabinet secretary and residency questions, and Democrats have good candidate options. In a neutral political environment, this district would be a potential pickup opportunity for Democrats. But with the winds favoring Republicans next year, Democrats will face an uphill climb in any constituency that voted for Trump last year, let alone by 7 points. That’s why this district begins as Likely Republican.

2nd District
The new 2nd District occupies the eastern, more rural and less mountainous part of the state. Current at-large Rep. Matt Rosendale, who lives in Glendive County toward the North Dakota border, is running in this district.

In 2020, when he was running statewide for the at-large district, Rosendale would have carried the new 2nd District by 25 points.

In 2022, he should win easily. Trump would have carried this newly-drawn district 62-35 percent in 2020, so any vulnerability for the former state auditor would come in a GOP primary. Unlike many other members who see their district borders changed, Rosendale already represents all of his new district, so he’s not taking in any new territory from which a potential competitor could emerge. Trump endorsed Rosendale last week, likely clearing his path to a second term. This district is Solid Republican, where it will likely stay through Election Day.

This story first appeared in Inside Elections with Nathan L. Gonzales on November 24, 2021.