2022 Senate: A Range of Outcomes After Virginia and New Jersey

Recent elections in Virginia and New Jersey provide additional clarity on the position of the national environment heading into the 2022 Senate elections, and although there are still a range of outcomes for how the midterms might play out, Republicans currently appear to have an advantage.

Virginia and New Jersey’s statewide races on Nov. 2 were the latest in a string of worrying elections for Democrats. In Virginia, a state President Joe Biden carried by 10.1 points in 2020, Republican businessman Glenn Youngkin defeated former Democratic Gov. Terry McAuliffe by 1.9 points to win the governorship, while Republicans also came out ahead in the races for lieutenant governor by 1.5 points and attorney general by 0.8 points. In New Jersey, Democratic Gov. Phil Murphy clinched re-election against Republican businessman Jack Ciattarelli by a surprisingly narrow 3.2 points, similarly falling short of Biden's 15.9-point win last November.

Republicans have also been seeing success down-ballot. Both federal races held on Nov. 2, a pair of special elections to fill vacant House seats in Ohio’s 11th and 15th districts, saw the Democratic candidate run behind Biden’s 2020 margin by approximately 3 points. Republicans also made substantial gains in the Virginia House of Delegates, and according to data compiled by Daily Kos Elections, other recent special elections for state legislative offices point to a swing of 4 or 5 points toward Republicans. When compared to the relative whompings in the Virginia and New Jersey governor races, these are slightly more encouraging numbers for Democrats, but they’re still not necessarily positive.

As the national environment seems to shift toward Republicans, the 2022 midterms are now less than a year away. Democrats, who hold a 50-50 majority in the Senate thanks to the vice president’s tie-breaking vote, will be defending 14 seats next November, while Republicans will be defending 20. Inside Elections currently rates eight seats as Battlegrounds: four held by Democrats (Arizona, Georgia, New Hampshire, and Nevada) and four held by Republicans (Florida, North Carolina, Pennsylvania, and Wisconsin). Though Biden carried six of these eight states in 2020, his average margin of victory across those six was just 2 points. 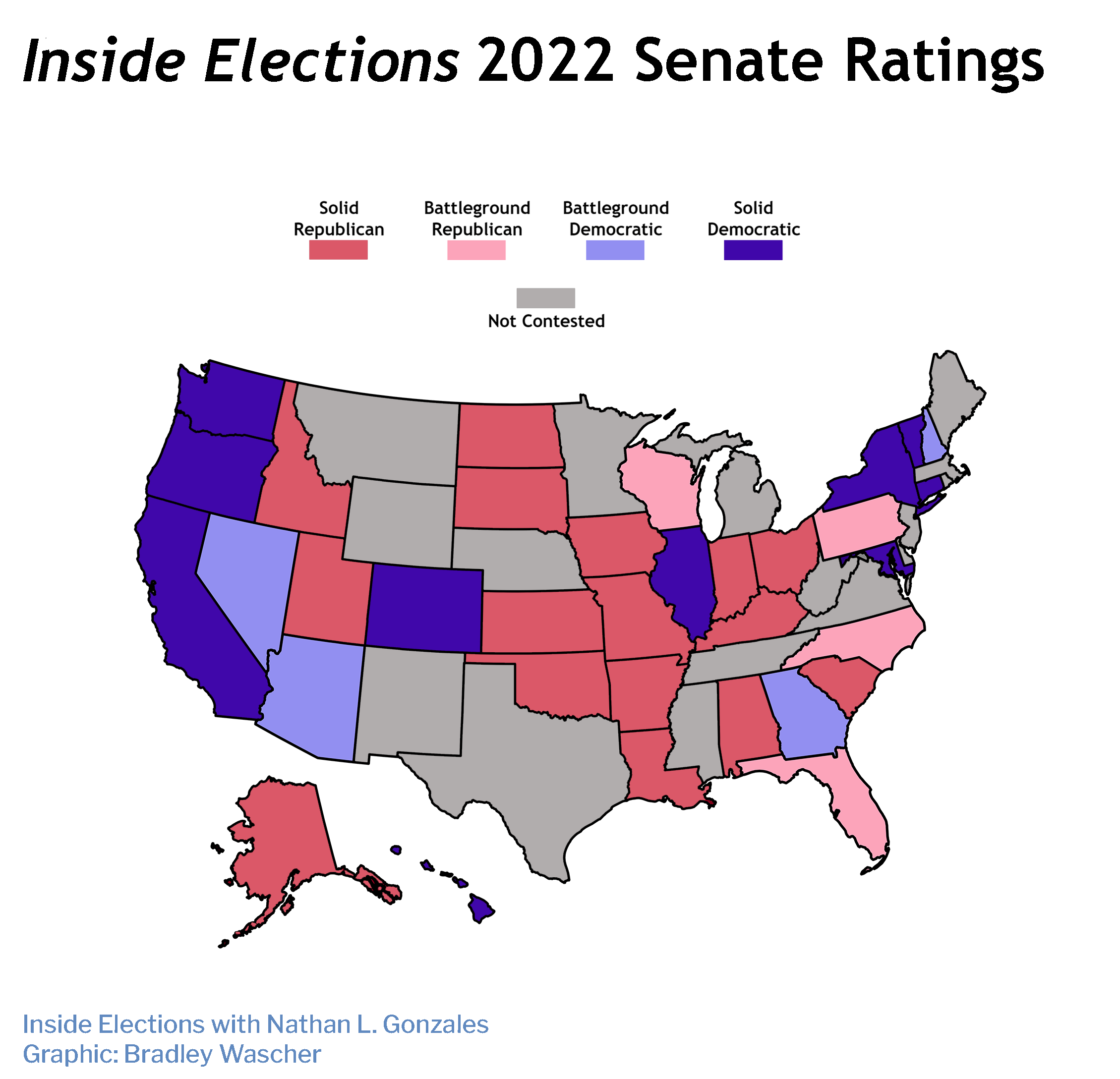 When this class of senators last faced voters in 2016, the winning candidate in every race was from the same party as that state’s presidential winner, the peak of a wider trend in which Senate races are tracking closer with presidential results. This allowed Democrats to net two seats by flipping New Hampshire and Illinois, cutting Republicans’ margin in the Senate to 52-48.

Democrats made gains in 2016 thanks to the winds of a slightly favorable national environment. But if the results of recent races — as well as broader historical forces — are to be believed, that breeze will probably blow in favor of Republicans come 2022. And in the kind of GOP-leaning national environment signaled by Virginia, New Jersey, and other elections this year, Republicans could be well-positioned to recapture the House and Senate majorities.

Estimating the National Environment
For a rough idea of how the Senate battleground might look in 2022, it’s possible to simulate the election under a range of hypothetical national environments.

Following that rubric, it’s fairly straightforward to determine the national environment for a previous election year. But because off-cycle elections only provide small snapshots in select slices of the country, calculating the lean of the entire nation in odd-numbered years requires additional assumptions. For that reason, and because the midterms are still almost a year away, it’s best to consider a range of potential outcomes using a variety of approaches.

One approach is to estimate the swing in each off-cycle election. Because gubernatorial races are not reliably strong at predicting the results of future elections, and this is particularly true for governors’ races in Virginia, the scope was expanded to include all statewide and federal elections in 2021 that effectively featured one Democrat against one Republican in the general election. Eight races in 2021 fit the bill: the June special election in New Mexico’s 1st District, the September California governor recall, and the Nov. 2 special elections in Ohio’s 11th and 15th districts as well as the statewide elections in Virginia and New Jersey on the same day.

Those elections’ results were then compared to the corresponding Inside Elections Baseline score for each state or congressional district. (Baseline captures each party’s political performance in a state by combining all federal and state election results over the past four election cycles into a single average.) Because the metric is designed to represent the performance of a “typical” candidate, subtracting Baseline from the 2021 results should provide a decent approximation of the national environment — especially once the process is repeated across multiple elections.

According to this benchmark, the average national environment across all eight races was R+2.2; reducing the average to just the gubernatorial races in Virginia and New Jersey, the average was R+8.3. Nearly identical estimates are reached by subtracting 2020 presidential results from the 2021 results, suggesting the current partisan lean could indeed fall between R+2 and R+8.

A second approach to approximate the national environment is based on knowing what the national environment was like in previous elections with similar margins to the outcome of races in 2021. Referencing our Baseline database of state- and congressional district-level election results between 2014 and 2020, we limited the search to all previous races where the outcome fell within 2.5 points of the 2021 election. 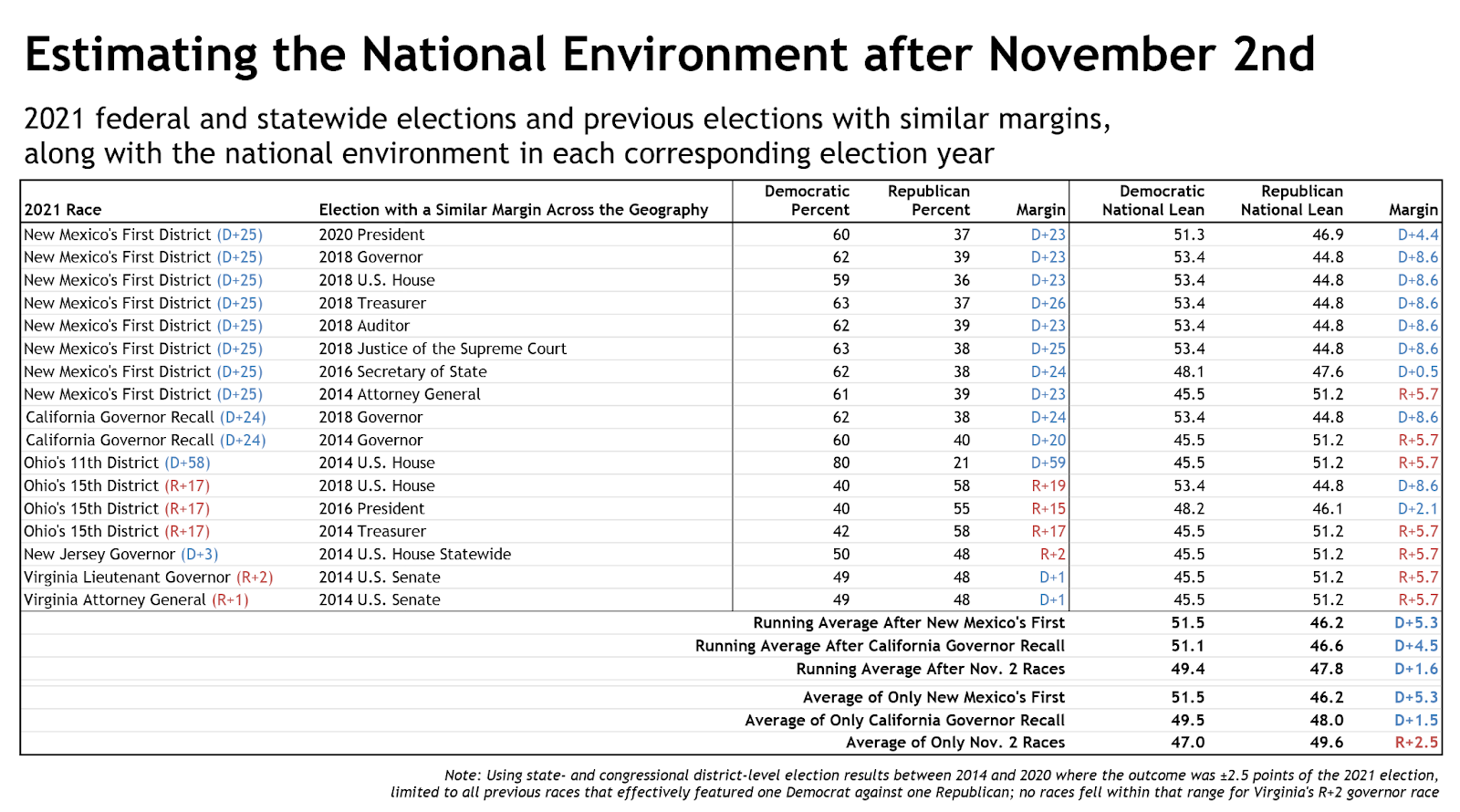 But that was back in June. Since then, Biden’s net job approval rating has tumbled from +11 to -9.2 in the FiveThirtyEight polling tracker, and Republicans now hold an advantage on the generic ballot, with polling averages varying from R+0.6 to R+4.2 and some individual surveys showing Republicans ahead by 8 points or more.

Likewise, both approaches of estimating the national environment show a drop in Democratic support when applied to the races that happened later in 2021.

According to the first approach, New Mexico’s 1st voted about 6.3 points more Democratic relative to its Baseline, while the results of California’s governor recall suggested a national environment of D+2.6 and the results of the six races on Nov. 2 averaged to R+3.4. Across all eight elections, the swing from Baseline, and therefore the implied national environment, was R+2.2.

Given these concurring numbers, it’s likely that the national environment probably does currently tilt in favor of Republicans. A middle guess of that lean might be approximately R+2.2. For an interval, the best-case scenario for Republicans could be in the neighborhood of R+8.3, while the best-case scenario for Democrats might be around D+1.6 — still almost 3 points behind Biden’s margin nationwide in 2020.

Application to the 2022 Senate Map
Based on the approximations of the national environment outlined above, Republicans are poised to pick up seats in the Senate.

This analysis is the product of a simple model that combined the 2016 Senate election results, the 2016 and 2020 presidential results, and 2020 statewide Baseline averages to estimate the current partisanship of each Senate seat up for re-election in 2022, distinguishing between open seats and races with incumbents. Those central estimates were then uniformly shifted according to three different partisan leans: D+1.6, R+2.2, and R+8.3.

Per these calculations, if the national environment in 2022 ends up being D+1.6, then Democrats could keep the majority, but they would probably be starting to cut it close in all four of their defending battlegrounds. In this type of political climate, Pennsylvania might still be on the table to flip for Democrats, and they could potentially trade it if they lose a seat to Republicans elsewhere. According to these simulations, Pennsylvania could be the tipping point race of 2022, or the seat that awards the deciding vote in the Senate — just as it was in the electoral college in 2020.

In a national mood of R+2.2 using these estimates, Democrats might lose some combination of their four battlegrounds of Arizona, Georgia, Nevada, and New Hampshire — and with them, the Senate majority. At R+5.7, equivalent to the House popular vote in 2014, Sen. Michael Bennet’s seat in Colorado could potentially even start looking like a shaky hold for Democrats. But given the partisanship of the remaining seats up for re-election, it is around this point that the potential for Republican gains probably begins to top out. An R+8.3 advantage in the calculation, same as the Virginia and New Jersey’s governor races relative to Baseline, would likely just be running up the score.

The Bottom Line
Of course, these calculations are estimates, not necessarily ratings or predictions. If anything, they serve as rough figures to supplement a certainty of the campaign we already knew: the national environment seems to slightly favor Republicans, at least compared to the 2020 election.

But regardless of the size of this GOP advantage, there are still eight Senate seats — Arizona, Florida, Georgia, Nevada, New Hampshire, North Carolina, Pennsylvania, and Wisconsin — that are in play, and all eight will likely stay competitive in anything except the most torrential of wave years.

Based on these numbers, Democrats have potential pickup opportunities in open races including Pennsylvania and North Carolina, while Republicans could look to Georgia, Arizona, or Nevada. The end chance of any seat flipping, however, depends on the national environment, and because each state will ultimately shift individually, there exist paths where Democrats maintain control in a slim Republican-favored environment or Republicans win control in a slight Democrat-leaning cycle. The simulations specifically contain some scenarios where the national environment is just under D+1 but Georgia and Arizona still flip for the GOP, and a few others where Pennsylvania still flips for Democrats in a Republican-leaning national environment. But a year out, the possibilities are still wide.

Therefore, with the results from Virginia, New Jersey, and other 2021 elections in mind, it will be important to follow upcoming races, including the January 2022 special House election to fill the open seat in Florida’s 20th District, to develop a stronger sense of the national environment.

Based on what we know now, though, Republicans appear to be ahead headed into 2022.

This story first appeared in InsideElections.com on November 23, 2021.