One of the last states to finalize its new congressional map, Missouri, ended up with a plan that will probably keep the partisan breakdown of its delegation intact. But a pair of open-seat races still guarantees some turnover in the next Congress.

Republican Gov. Mike Parson signed off on the new map in May, following almost half a year of gridlock on the part of the state legislature.

The state House had initially approved a plan in January that largely resembled the current map, with five strongly Republican seats, one Republican-favored seat, and two strongly Democratic seats. But conservative Republicans in the state Senate, pushing for a 7R-1D proposal that would eliminate the Democratic-held 5th District by splitting the Kansas City area, responded with a filibuster.

After many more months of back-and-forths and almost-maybes, the standoff was ultimately broken by a revised compromise map — the one signed by Parson — narrowly dodging intervention from the courts.

Under the new map, the median Republican-leaning district in Missouri would have voted for President Donald Trump by 38.2 points in 2020, according to a composite of all statewide and federal races between 2016 and 2020 calculated by Inside Elections. Nearly mirroring this, the state’s two Democratic-favored districts backed Joe Biden by an average of 42 points.

With the partisan outcome practically set for most of Missouri’s eight House seats, another race worth watching is in the Senate, where a sizable GOP field has emerged to replace retiring Republican Sen. Roy Blunt. Indeed, two Republican members of the congressional delegation, Rep. Vicky Hartzler in the 4th District and Rep. Billy Long in the 7th, are stepping down to seek the open Senate seat, setting up crowded GOP primaries in both districts.

But even with a few fresh faces among its House membership, Missouri is likely to retain its partisan composition of six Republicans and two Democrats. The state’s sole competitive district under the current map, the 2nd, has been redrawn to further entrench Republicans, almost certainly taking it off the table for Democrats this fall. 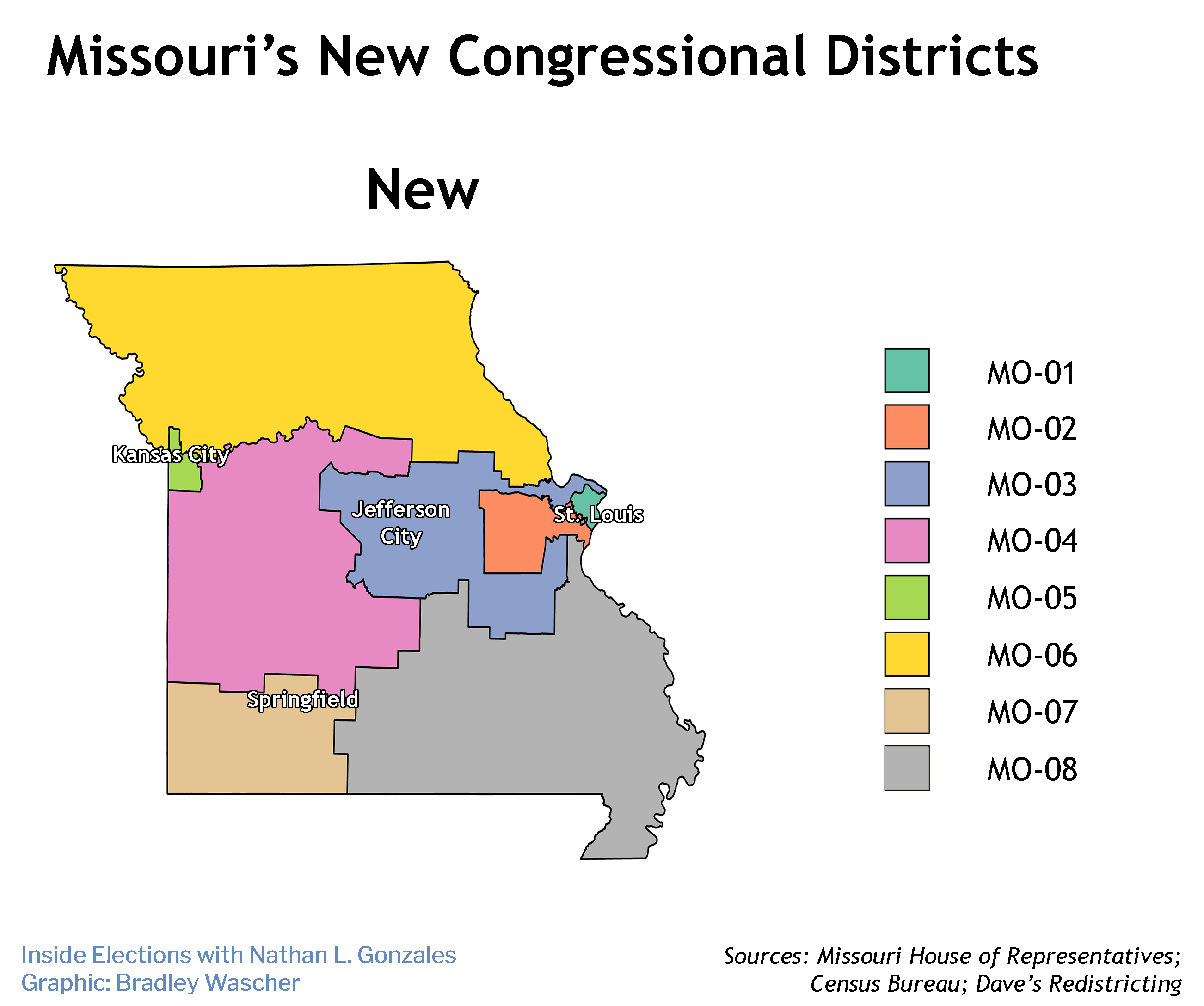 1st District
The 1st is rooted in St. Louis. The district exchanges some suburbs and municipalities in St. Louis County, but stays mostly the same. Freshman Democratic Rep. Cori Bush unseated 10-term Rep. William Lacy Clay in the 2020 primary, having previously run against Clay in 2018. This year, Bush faces a primary challenge of her own from state Sen. Steve Roberts, who is making the case that Bush’s “Defund the Police” mentality is hurting her constituents. The district preferred Democrats by an average of 54.1 points in the composite of 2016-2020 elections, and Biden would have carried the district by 58 points in 2020. Initial Rating: Solid Democratic.

2nd District
The 2nd contains many of the suburbs and exurbs to the west of St. Louis. The district expands westward under the new map, gaining Franklin County as well as portions of Warren County, while also trading land in St. Charles County. These changes make the seat much more favorable for Republicans: in the 2020 presidential election, the current lines would have produced a virtual tie between Trump and Biden, but Trump would have carried the new 2nd by 8 points. Overall, the district preferred GOP candidates by an average of 12.8 points in the composite of 2016-2020 elections. Republican Rep. Ann Wagner, who was a top Democratic target last cycle, is, in short, shored up — and more sure to therefore win re-election. The best-funded Democrat, businessman Ben Samuels, dropped out after the map was finalized, leaving state Rep. Trish Gunby as the most notable Democrat running. Solid Republican.

3rd District
The 3rd, home to Jefferson City, wraps around the 2nd District to serve the rest of east-central Missouri. The “hole” in the eastern part of the 3rd is now much larger, as it gains Crawford and Washington counties in the south, drops Lincoln County in the north, and adds Cooper and Moniteau counties in the west; the district also now reaches toward the southern half of Columbia, including the University of Missouri, in Boone County. The 3rd voted for Republicans by an average of 23.6 points according to the 2016-2020 composite, and Trump would have won by 26 points in 2020. Republican Rep. Blaine Luetkemeyer isn’t in danger. Solid Republican.

4th District
The 4th covers west-central Missouri. Notably, the district loses the southern half of Boone County (and with it, the bottom half of Columbia) to the reconfigured 3rd District, and it also loses Randolph, Audrain, Cooper, and Moniteau counties. In return, it gains Polk County in the south and Lafayette and Saline counties in the north, alongside some new reach into Jackson County and other changes in Webster and Camden counties. The redrawn 4th would have voted for Trump by 40 points in 2020, making it approximately 5 points more favorable for Republicans compared to the current lines.

Hartzler is giving up this seat to run for Senate, and a number of candidates are seeking to replace her. The best-funded Republican on March 31 was former Boone County Clerk Taylor Burks, followed by former news anchor Mark Alford. Farmer/accountant Kalena Bruce, former police/Navy officer Bill Irwin, and state Sen. Rick Brattin are also in the field. With the changes to the district’s boundaries, especially in Boone County, residency could play a factor — many of the current top fundraisers live outside of the new 4th, and one candidate, state Rep. Sara Walsh, has already withdrawn.

Considering the 4th had an average partisanship of R+35.2 in the 2016-2020 composite, the winner of the August 2 primary will almost surely win the general election. Solid Republican.

5th District
The 5th, anchored by Kansas City, is now confined to western portions of Clay and Jackson counties, dropping Ray, Lafayette, and Saline counties. Democratic Rep. Emmanuel Cleaver should be fine in this district that voted for his party by an average of 22.6 points in statewide and federal elections between 2016 and 2020. Biden would have carried the 5th by 26 points in 2020. Solid Democratic.

6th District
Spanning all of northern Missouri, including St. Joseph, the 6th adds area but remains Republican-friendly. In particular, it picks up Ray, Randolph, and Lincoln counties, while also expanding more into Audrain County and seeing other changes closer to Kansas City in Clay and Jackson counties. The district voted for Republicans by 31.4 points on average in the 2016-2020 composite, preferring Trump by 37 points in 2020. Republican Rep. Sam Graves is on track for a 12th term. Solid Republican.

7th District
Located in southwestern Missouri, the 7th contains Springfield. There were few changes to the district: it loses Polk County and gains land in Webster County. The 7th had an average partisanship of R+41 according to the composite of 2016-2020 elections.

The real excitement in the 7th will probably come from its GOP primary, with Long leaving this seat open to run for Senate. The leading Republican fundraisers on March 31 were former state Sen. Jay Wasson (who is backed by the Club for Growth), state Sen. Eric Burlison, physician/farmer Sam Alexander, and state Sen. Mike Moon. Two campaign polls — an American Viewpoint survey conducted May 10–12 for Wasson’s campaign and a WPAi survey conducted May 20-22 for Burlison — found a tight race at the top, with a plurality of GOP primary voters still undecided. Trump would have carried this district by 41 points in 2020, meaning the nominee will have an easy path to the House. Solid Republican.

8th District
The 8th covers southeastern Missouri. It now takes the eastern half of Jefferson County to reach closer toward St. Louis, losing Crawford and Washington counties in return. The 8th preferred Republicans by an average of 43 points in the 2016-2020 composite, and Trump would have won by 51 points in 2020, making this the most Republican-leaning district in Missouri. Republican Rep. Jason Smith doesn’t have much to worry about. Solid Republican.

This story first appeared in Inside Elections with Nathan L. Gonzales on June 3, 2022.