Kansas Redistricting: Why Not Split Wyandotte?

A drawn-out redistricting process in Kansas resulted in few alterations overall to its congressional map, but the state’s only Democratic-held seat will likely be even more competitive this November.

Kansas is no stranger to dramatic redistricting cycles, and this most recent round proved no different. Earlier in February, Democratic Gov. Laura Kelly vetoed the plan drawn by GOP mapmakers, but her veto was then overridden by Republican supermajorities in the state Legislature.

And so began the map’s trip through the state courts, in which a district judge initially struck down the plan for diluting the influence of Democratic Black and Hispanic voters. (The new lines split Wyandotte County, home to Kansas City, between the 2nd and 3rd districts.) But in May, the Kansas Supreme Court ruled that the original map could stand, meaning these will be the lines used for the next decade.

The new map retains its three districts that are reliably Republican. But the Democratic-held 3rd District, already a top target, will almost surely become one of the GOP’s prime pickup opportunities this year.

Republicans currently hold a 3R-1D advantage in the House delegation. If the GOP does indeed flip the 3rd District, Democrats will once again be shut out of Kansas’s congressional representation, as they had been for much of the past decade pre-2018. 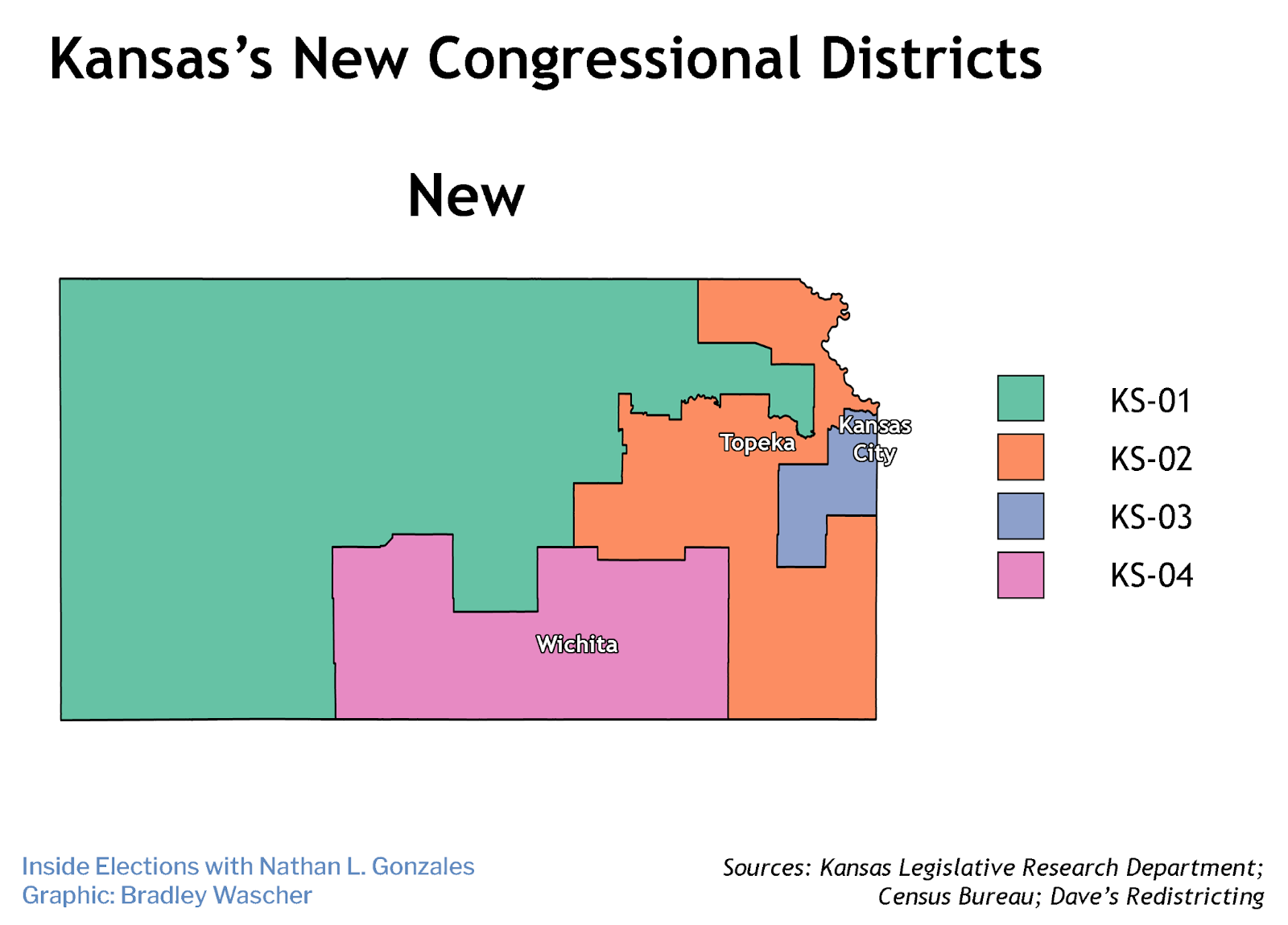 1st District
The big 1st (appropriately nicknamed the “Big First”) spans western and north-central Kansas, connecting communities from Garden City to Salina to Manhattan. The district now reaches farther toward the state’s eastern border, picking up Jefferson County as well as parts of Jackson County and Douglas County (containing Lawrence, and the University of Kansas) in exchange for several rural counties. The district preferred Republicans by an average of 28.8 points, according to a composite of all statewide and federal races in Kansas between 2016 and 2020 calculated by Inside Elections. Trump would have carried the 1st by 31 points in 2020, meaning freshman GOP Rep. Tracey Mann should have little problem securing his second term. Initial Rating: Solid Republican

2nd District
The 2nd covers much of eastern Kansas and includes Topeka. The district is less compact compared to its previous configuration — its shape now somewhat resembles the numeral 2 — as it loses Lawrence and gains the northern half of Wyandotte County (and with it, portions of Kansas City). The 2nd voted for Republican candidates by an average of 14.5 points in the composite of 2016-2020 elections, while Trump would have won by 16 points in 2020. Freshman Republican Rep. Jake LaTurner, the former state treasurer, faces a Democratic challenger in the form of Navy Reserve officer Patrick Schmidt, but this seat is still very favorable for the GOP. Solid Republican.

3rd District
By far Kansas’s smallest district in terms of area, the 3rd is also the state’s most competitive. The district, still keeping Johnson County and Overland Park, now fills all of Miami County, also picking up rural Franklin and Anderson counties. But it crucially loses much of Kansas City in the northern half of Wyandotte County. In total, these changes make the district approximately 6 points more favorable for Republicans: Biden would have carried the new 3rd by just over 4 points in 2020, compared to nearly Biden+11 under the current lines.

As a result, Democratic Rep. Sharice Davids finds herself in a tough re-election bid. Amanda Adkins, the former state GOP chairwoman who lost to Davids in 2020, 54–44 percent, is running again — and this time, Adkins will probably have a favorable national environment at her back. With an average partisanship of R+1.3 in the 2016-2020 composite, the 3rd could be one of Republicans’ premier places for a pickup come November. Toss-up.

4th District
The 4th, located in south-central Kansas, contains Wichita alongside smaller cities such as Newton and El Dorado. The only change was the addition of precincts in Pawnee County to meet population targets. The 4th voted for Republicans by an average of 20.8 points in the 2016-2020 elections composite, and Trump carried the district by 22 points in 2020. Republican Rep. Ron Estes, who first won the seat in a 2017 special election to replace former Trump administration official Mike Pompeo, is on track for his third full term. Solid Republican.

This story first appeared in InsideElections.com on May 27, 2022.