Just because a party can gerrymander the living daylights of a state, doesn’t mean it will. The new congressional map in Indiana is a good example.

With control of the state legislature and the governorship, Republicans had full control of the redistricting process. But rather than squeezing one more seat out of the delegation, they solidified the status quo and potentially left the state without a competitive House race for the next decade.

It’s similar to what Republicans did in Ohio a decade ago. By packing Democrats into Cleveland and Columbus-area districts, Republicans made the surrounding districts more difficult for Democrats to win. That Ohio map should be considered the gold standard for partisan redistricting because of its endurance. No House seat changed partisan hands in Ohio in 10 years.

Republicans need a net gain of just five seats in 2022 to retake the majority, but that fight for the House won’t be taking place in the Hoosier State next year. Unless there are a couple political earthquakes, Indiana will likely send seven Republicans and two Democrats to Washington for the foreseeable future.

1st District
This northwest Indiana district would have been the target, if Republicans had chosen to draw a takeover opportunity. Instead, Democratic Rep. Frank Mrvan’s district is virtually untouched. Joe Biden won the current district 54-45 percent and the newly-drawn district 53-45 percent, according to calculations by Nick Roberts, a student at Indiana University-Purdue University at Indianapolis. Considering Mrvan won by 16 points in 2020 and the seat has been held by a Democrat since the 1920s, it’s up to Republicans to prove this is a winnable race, even in a good GOP year. Initial rating: Solid Democratic.

2nd District
Leaving the 1st intact keeps Republican voters in GOP Rep. Jackie Walorski’s neighboring 2nd District. And that likely puts the 2nd out of reach for Democrats under almost any conditions. The north central 2nd is anchored by South Bend and sometimes enters the conversation about competitive seats when an election cycle breaks against Republicans. But Biden would have lost to  Donald Trump by 22 points if the new lines had been in place in 2020. Initial rating: Solid Republican.

3rd District
Republican Rep. Jim Banks, the chairman of the Republican Study Committee for House Republicans, shouldn’t have to worry about re-election. His northeast Indiana seat, including Fort Wayne and Huntington, voted for Trump by 30 points (64-34 percent) in 2020. It doesn’t seem to matter whether he faces a businesswoman, professor, or a man experiencing homelessness (Banks’ last three opponents), he always wins. Initial rating: Solid Republican.

4th District
Minimal changes were made to the partisan performance of GOP Rep. Jim Baird’s west central district, as Trump would have won it by 30 points under the current and new lines. Baird was first nominated in 2018 by 7 points in a crowded primary with less than 37 percent of the vote and doesn’t have a reputation for being a strong campaigner. But he ran unopposed in the 2020 primary and doesn’t have to worry about the general election considering the nature of the district. Initial rating: Solid Republican.

5th District
The 5th District changed most significantly by re-assigning heavily Democratic portions of Marion County (Indianapolis) to the neighboring 7th District to the south. That will help the new GOP Rep. Victoria Spartz significantly. After Trump’s 12-point win in 2016 and his 2-point win in 2020, the suburban district was moving toward Democrats. Yet Spartz still won the open seat (left by GOP Rep. Susan Brooks) by 4 points in 2020, in what was thought to be one of the closest races in the country leading up to Election Day. The newly-drawn seat would have gone for Trump by a 16-point margin, essentially putting the district out of reach for Democrats. In the 2018 Senate race, Democratic Sen. Joe Donnelly won the current 5th narrowly, but now-GOP Sen. Mike Braun would have won that race by 10 points under the new lines. Initial rating: Solid Republican. 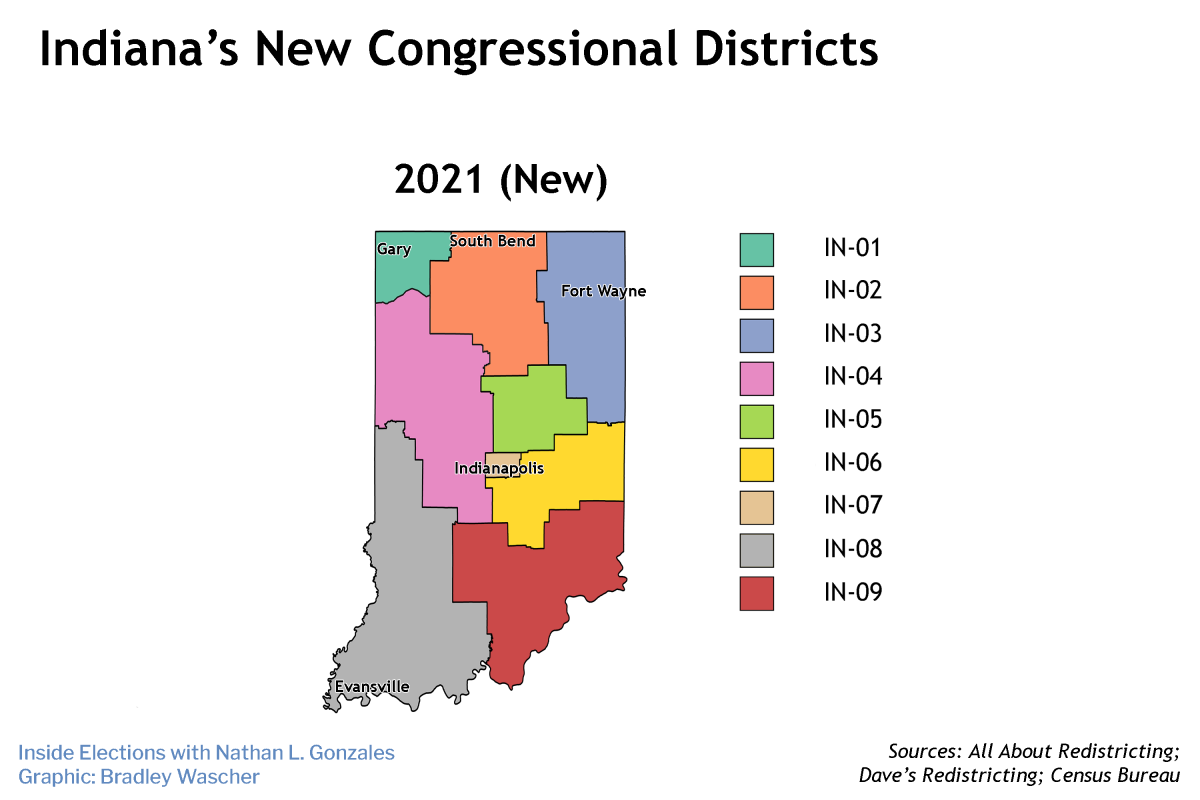 6th District
This eastern central district became more compact geographically, but is still fundamentally Republican in its performance. Trump won the current district by 40 points in 2020 and would have won the newly-drawn 6th by 32 points. The seat will now include a more narrow swath of counties from south of Indianapolis to the Ohio border, giving some of its current southern counties to the 9th District and northern counties to the 3rd. GOP Rep. Greg Pence, former Vice President Mike Pence’s brother, shouldn’t have any problems winning re-election. Initial rating: Solid Republican.

7th District
By taking in more of Marion County from Spartz’s district, Democratic Rep. Andre Carson’s seat becomes even more Democratic. The Indianapolis district goes from a 28-point Biden victory to a 32-point Biden win under the new lines. It’s hard to believe Carson was first elected by just 11 points in a 2008 special election. His next races aren’t going to be nearly that close. Initial rating: Solid Democratic.

8th District
Minimal changes, particularly from a political perspective, were made in this southwest Indiana seat held by GOP Rep. Larry Buschon. Trump would have won the newly-drawn district 66-33 percent, keeping it firmly in GOP hands. It’s hard to believe that Democratic Rep. Brad Ellsworth represented a version of this seat for two terms after his election in 2006*. But that might tell us more about the deficiencies of the incumbent he defeated, Republican John Hostettler, than the competitive nature of the area. Initial rating: Solid Republican.

9th District
After the wealthy Tennessee native won a crowded and competitive primary in 2016, GOP Rep. Trey Hollingsworth has solidified himself in this southeast Indiana seat that now stretches to the Ohio border. In 2018, when it was a good cycle for Democrats, the congressman won re-election by 13 points over a credible candidate. Two years later, he won by more than 25 points in his current district. And Trump would have won his new district by 28 points. Initial rating: Solid Republican.

*Oct. 16, 11:@4pm correction: The original version of this article had the wrong initial election year for Ellsworth.

This story first appeared in InsideElections.com on October 13, 2021.