It might have required resorting to Plan B, but Virginia has a new congressional map.

The state’s bipartisan redistricting commission, which was approved by voters in 2020, failed to agree on new district lines in October, handing over control of the mapmaking process to the state Supreme Court. Two special masters, one chosen by each party, were then appointed to assist with the final proposals. After comments from the public and revisions by the special masters, the official map was approved in late December.

Compared to the current lines, the changes to the districts were mostly minimal. Virginia will retain its 11 congressional seats, and no incumbents will be forced to run against each other.

Currently, the state’s congressional delegation is composed of seven Democrats and four Republicans. The new map creates five districts that are heavily Democratic, four districts that are reliably Republican, and two competitive districts (both of which are currently represented by Democrats). President Joe Biden would have carried seven of the eleven districts in the 2020 presidential election, while Republican Gov. Glenn Youngkin would have carried six districts in the 2021 governor’s race.

A best-case scenario for Democrats would probably be maintaining the 7D-4R status quo. But if Republicans still have the headwinds of a favorable national environment going into November, the 2nd and 7th districts could become very real pickup opportunities. If both seats were to flip, Republicans would hold a 6R-5D majority in the congressional delegation. 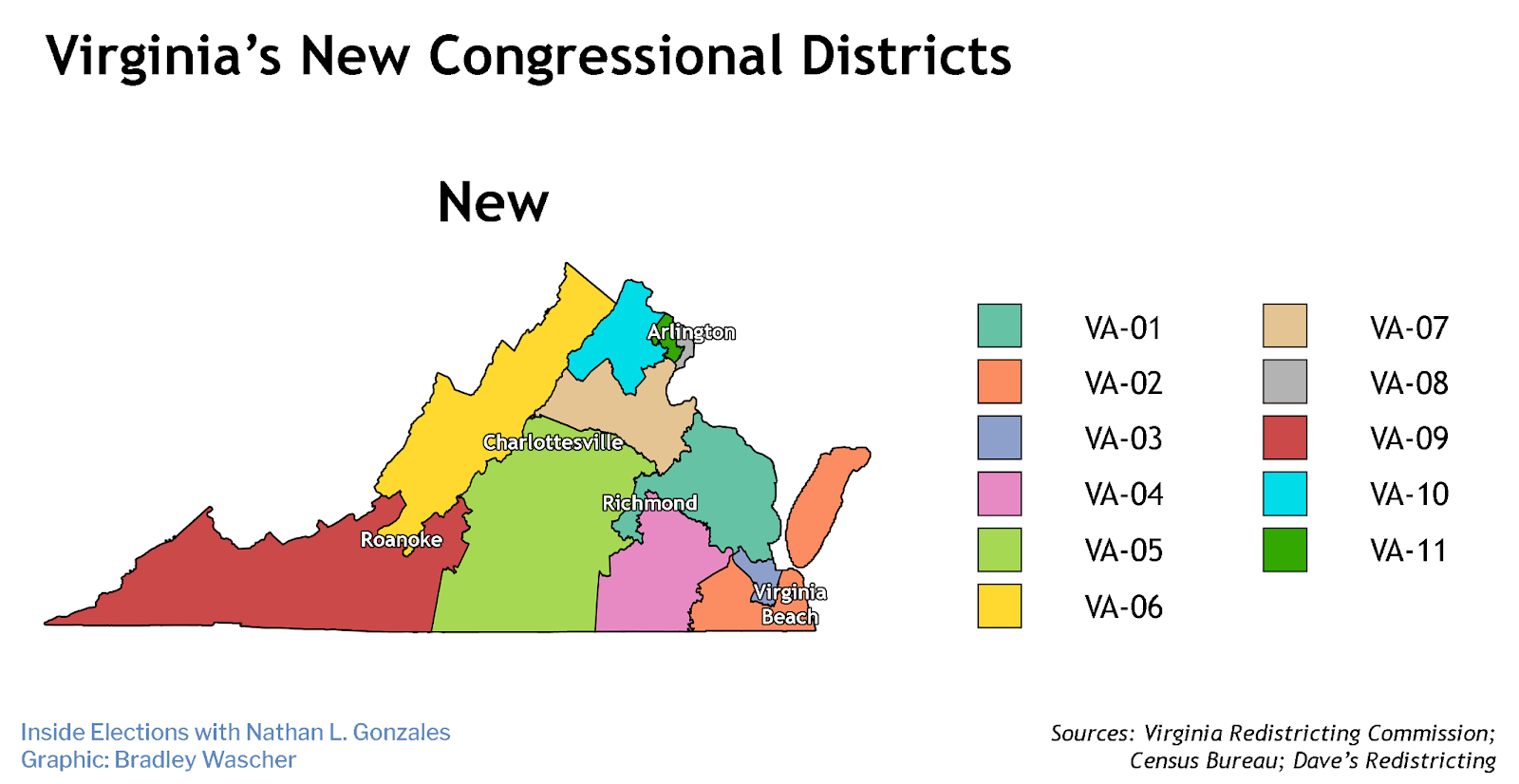 1st District
The northernmost Tidewater district, the 1st, no longer extends into the city of Fredericksburg or Prince William and Fauquier counties, but it now reaches around the Richmond exurbs to take in portions of Henrico and Chesterfield counties. These changes make the district a tad more favorable for Republicans: the previous configuration of the 1st voted for President Donald Trump by 4 points in 2020, while the new 1st would have voted for him by 6 points.

Overall, according to a composite of 10 federal and statewide elections in Virginia between 2016 and 2021 calculated by Inside Elections, the 1st preferred Republicans by an average of 11.4 points. Youngkin would have carried the district by 17 points in 2021. So there’s not much to worry about for GOP Rep. Rob Wittman — especially considering the top Democratic fundraiser, Marine veteran Stewart Navarre, dropped out of the race in January. Initial Rating: Solid Republican.

2nd District
The 2nd remains the state’s easternmost district, anchored around Virginia Beach. Rather than extending inward toward Williamsburg County, as it did in the previous map, the district now takes in all or parts of Chesapeake, Suffolk, Isle of Wight, Franklin, and Southampton counties.

Although Democratic Rep. Elaine Luria’s Norfolk home was drawn outside of the new district, she plans to move to Virginia Beach to continue representing the 2nd — but a change of scenery won’t be her only hurdle to a third term. Compared to the previous lines, the new 2nd is about 4 points more favorable for Republicans, with an average partisanship of R+3.2 according to the 2016-2021 composite. Luria won by 6 points in 2020, and for the first time, it appears she will not be facing Republican Rep. Scott Taylor. Republican state Senator and Navy veteran Jen Kiggans, who has introduced bills that ban “divisive concepts” from schools and restrict participation for transgender athletes, is running as one of the GOP’s top recruits anywhere in the country. Jarome Bell, a Trump acolyte who previously campaigned for the seat in 2020, is also running. Luria had $2 million more in the bank than Kiggans on Dec. 31, but given that the 2nd would have flipped from Biden+2 in 2020 to Youngkin+12 in 2021, this might be Republicans’ best pickup opportunity in Virginia. Initial Rating: Toss-up.

3rd District
The 3rd, nestling Newport News with Norfolk, loses its reach into Suffolk and Isle of Wight counties, but it is still mostly similar to its previous configurations. Forty-five percent of the 3rd’s population is Black, the highest share in any of Virginia’s congressional districts. The district preferred Democrats by an average of 34 points in the composite of 2016-2021 elections, and it would have voted for Biden by 38 points in 2020 and for former Gov. Terry McAuliffe by 28 points in 2021. Democratic Rep. Bobby Scott should almost surely win a 16th term. Initial Rating: Solid Democratic.

4th District
The 4th still runs from Richmond through Southside to the border with North Carolina, although it no longer extends toward Chesapeake. But the district is still deeply Democratic, preferring Biden by 36 points in 2020 and McAuliffe by 25 points in 2021. Across all statewide elections in Virginia between 2016 and 2021, the 4th voted for Democrats by an average margin of 31.6 points. Democratic Rep. Donald McEachin doesn’t appear to be in any real danger. Initial Rating: Solid Democratic.

5th District
The 5th retains Charlottesville, and also picks up Lynchburg. But in return, the Southside district traded away its reach up into Fauquier County, making its new shape much flatter overall. Geographic changes aside, the partisanship of the district is largely the same: the 5th preferred Republicans by an average of 12.2 points in the 2016-2021 composite, while Trump would have carried the district by 8 points in 2020 and Youngkin would have won by 21 points in 2021. A number of Democrats have entered the race to challenge Republican Rep. Bob Good. They include minister/businessman Josh Throneburg as well as Andy Parker, a gun control advocate whose daughter Alison was one of the two news reporters killed in a tragic 2015 Roanoke shooting. However, Good still seems well positioned to break the recent streak of one-and-done Republicans holding this seat, especially if the national environment benefits the GOP. Initial Rating: Solid Republican.

6th District
The 6th covers the Shenandoah Valley, stretching across northwest Virginia and containing Roanoke to the south. Under the new map, the 6th now extends all the way to Frederick and Clark counties, finally finishing its slow, decades-long crawl northward that started in Augusta County following the 1970 census. Republican Rep. Ben Cline doesn’t have much to fear in this Trump+22 and Youngkin+34 district that preferred Republicans by an average of 25.2 points in the 2016-2021 composite. Initial Rating: Solid Republican.

7th District
The new 7th no longer reaches around the suburbs of Richmond, but now takes in all of Fredericksburg and moves into Prince William County. While this northward reconfiguration places Democratic Rep. Abigail Spanberger’s home outside of the district, she has announced that she will still run for this seat. But her new neighbors won’t be the only unfamiliar faces: just one-quarter of the population in the new 7th is drawn from the old 7th, according to Daily Kos Elections, meaning Spanberger will have to introduce herself to many new voters before November.

Republican candidates are already lining up to challenge Spanberger, who won by less than 2 points in 2020. Army intelligence officer John Castorani, former Green Beret Derrick Anderson, and state Sen. Bryce Reeves have all raised at least $200,000 by the end of 2021 — although none of their hauls seem as impressive when stacked up against Spanberger’s $3 million. The new 7th is 4 or 5 points more favorable for Democrats compared to the current lines; its average partisanship was D+2.5 in the composite of statewide and federal races between 2016 and 2021. Crucially, though, the district would have flipped from Biden+7 in 2020 to Youngkin+6 in 2021. So in a national mood that is uncertain for Democrats, Spanberger might start with a slight advantage, but she’s far from safe. Initial Rating: Tilt Democratic.

8th District
Still containing Arlington, Alexandria, and Falls Church, the 8th saw few changes apart from trading a few suburbs on the outskirts, as it typically does in redistricting cycles. This is the most Democratic-leaning district in Virginia, with an average partisanship of D+51.1 in the 2016-2021 composite. The district would have voted for Biden by 53 points in 2020, and for McAuliffe by 46 points in 2020. Democratic Rep. Don Beyer seems set to secure a seventh term, although he does face a primary challenge from progressive Victoria Virasingh. Initial Rating: Solid Democratic.

9th District
The 9th spans Southwest Virginia, including the cities of Blacksburg and Bristol. The primary differences from the outgoing map are in the eastern part of the district, near Roanoke: the new 9th wraps south toward Bedford County, while the current 9th had veered north toward Alleghany County. The district’s average partisanship was R+40.5 according to the composite of 2016-2021 elections, and it would have voted Trump+42 in 2020 and Youngkin+49 in 2021, making it Virginia’s most Republican-leaning district. Republican Rep. Morgan Griffith ran unopposed in 2020, and 2022 shouldn’t be too difficult for him either. Initial Rating: Solid Republican.

10th District
The 10th, Virginia’s northernmost district, is now reminiscent of its shape following the 2000 census. Rooted in Loudoun County, the new lines essentially exchange Frederick and Clarke counties for Fauquier and Rappahannock counties. These changes hardly affect the 10th’s partisanship. The district favored Democrats by an average of 9.8 points in the composite of 2016-2021 elections, and Biden would have carried it by 18 points.

Republicans didn’t give Democratic Rep. Jennifer Wexton much of a scare in 2020, when she ended up winning by 14 points. This year, Prince William County Supervisor Jeanine Lawson, the leading GOP fundraiser with $374,000 on hand, might manage to tighten the margin — after all, the new 10th District would have voted for McAuliffe by only 2 points in 2021. And Wexton was just added to Democrats’ “Frontline” class of vulnerable incumbents. But with Wexton’s own war chest nearing $2.7 million, she begins as the favorite. Initial Rating: Solid Democratic.

11th District
The most substantial change to the Fairfax-focused 11th is that the district no longer reaches into Prince William County. Electorally, these adjustments could cut Democrats’ margins down by a few points, but the seat is still Rep. Gerry Connolly’s to lose. Tech company manager Mike Clancy is the best-funded Republican in the race. The new 11th would have voted for Biden by 41 points in 2020 and for McAuliffe by 29 points in 2021, with an average margin of D+34.8 in the composite of races between 2016 and 2021. Initial Rating: Solid Democratic.

This story first appeared in InsideElections.com on February 8, 2022.