Independence Day 2020 was a time of reflection for some, a time of celebration for others, and time off for pollsters. Relatively few new polls were released in the days surrounding the holiday, but available surveys still suggest a wide gap between Joe Biden and President Donald Trump.

In an average of 14 national polls conducted over the past two weeks, Biden led Trump by 8 points (47.7 percent to 39.7 percent). Let’s compare that figure to previous Snapshots:

Based solely on the two most recent toplines, one might conclude that Biden is falling while the president is gaining. Yet that’s probably not the case — to understand why, look at how those averages changed throughout June.

At the end of May, Biden’s average margin over Trump neared 7 points; two weeks later, that gap had grown to 9 points; then, by the end, the former vice president enjoyed his largest lead of the entire general election season so far, exceeding 10 points.

The exact numbers obviously vary from day to day, but there’s reason to believe a theme emerged over the course of the month — while Biden stayed steady, President Trump shifted, downward.

A box plot of both candidates’ support tells a similar story. President Trump’s box is bigger, indicating that his average daily poll numbers fell within a wider interquartile range (IQR), or middle 50 percent: 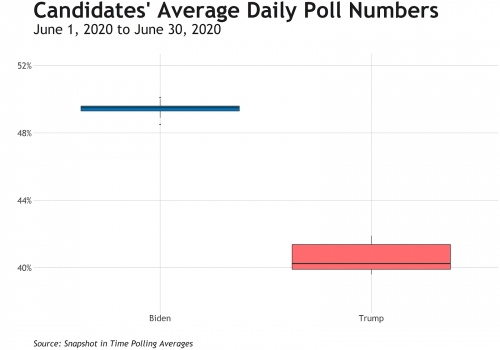 Not to repeat the same point ad nauseam, but these metrics all arrive at a conclusion worth reiterating — most of the polling movement in June appears to have taken place on President Trump’s end, rather than Biden’s.

Of course, caveats abound. Namely, one must remember just how small these differences actually are. The president’s interquartile range only covered 1.5 percentage points, after all, compared to Biden’s IQR of 0.3 percentage points. In other words, even if the president’s numbers moved more dramatically, the range in which they moved was assuredly narrow.

That said, these findings do help to explain why we could expect a slightly slimmer Biden margin going forward. If the gap were to tighten, the former vice president wouldn’t be crashing — because by this metric, he was never really rising all that much. Rather, President Trump might simply be recovering from a plausible low-water mark.

The State of the States
Unfortunately, the landscape in key battleground states doesn’t lend itself to such granular number-crunching. Only a handful of polls came out over the last two weeks in Arizona, Florida, Michigan, North Carolina, Pennsylvania, and Wisconsin.

Two new polls were released in Arizona, both suggesting an advantage for the former vice president.  Data Orbital found Biden ahead by 2 points, and Change Research (D) found Biden ahead by 7 points (compared to Biden +1 in mid-June). Indeed, across seven surveys conducted since the middle of June, Biden led the president by an average of 3 points (46.9 percent to 43.9 percent).

Florida, which trended heavily toward Biden last month, had two new polls.  Change Research (D) found Biden ahead by 5 points (compared to their Biden +7 result from mid-June), but Trafalgar Group (R) saw both candidates at 46 percent each. In an average of six surveys conducted over the past month, Biden was ahead by 5.1 points (47.8 percent to 42.7 percent).

Although Michigan usually leads the pack when it comes to fresh polling, just two Wolverine State surveys were released in the past two weeks. Both placed the Democrat modestly ahead: Public Policy Polling (D) found Biden up by 6 points, and Change Research (D) saw a 5-point advantage for the former vice president (compared to Biden +2 in mid-June). Across an average of seven recent polls, Biden led by 7.7 points (48.7 percent to 41 percent).

Two new polls in North Carolina also paint favorable outlooks for Biden — especially based on their respective trendlines.  Change Research (D) found Biden ahead by 7 points (compared to Biden +2 in mid-June), while East Carolina University placed that Biden advantage at only 1 point (compared to their mid-May result of Trump +3). In an average of eight new polls since mid-June, Biden led Trump by 2.5 points (47 percent to 44.5 percent).

In Pennsylvania, three new polls were released. Susquehanna Polling & Research and Trafalgar Group (R) each found Biden ahead by 5 points, and Change Research (D) saw Biden ahead by 6 points (compared to their mid-June topline of Biden +3). Across the six latest polls of Pennsylvania, Biden led President Trump by an average of 6.5 points (48.7 percent to 42.2 percent).

And finally, it shouldn’t be difficult to guess how many polls were released in Wisconsin; it might be hard to predict their toplines, though. The Change Research (D) result of Biden +8 isn’t surprising given their Biden +4 poll from mid-June. Yet Trafalgar Group (R) interestingly found Trump ahead by 1 point, making it the first poll since March to show the president leading in Wisconsin. Nevertheless, an average of seven polls found Biden leading here by an average of 8 points (49.1 percent to 41.1 percent).

If subsequent surveys show similar data, it will become even more clear that the presidential battleground is expanding into normally Republican states.

This story first appeared in Inside Elections with Nathan L. Gonzales on July 10, 2020.