In the recent documentary film Boys State, a thousand high schoolers from across Texas gather in Austin for a whirlwind week of mock elections for various state offices including governor. Although the political parties and platforms are fictional, the participants campaigning for office often take conservative stances on real-life issues like gun rights and abortion to appeal to their peers, who skew heavily conservative.

If current political trends in Texas continue, it’s very possible that this movie will soon become a look at the Texas of yesterday.

Texas has also leaned Republican in recent downballot elections. The Inside Elections Baseline score, which measures average partisan performance in Texas over the past four election cycles, is 55.6 percent Republican and 41.1 percent Democratic.

The 2018 Midterm Elections
One of the most electrifying contests for Democrats in 2018 was the Texas Senate race. Ultimately, Republican Sen. Ted Cruz prevailed over Democratic Rep. Beto O’Rourke by just 3 points, although O’Rourke’s performance was the strongest for a Democrat statewide since 1998. Republican Gov. Greg Abbott won his re-election bid with a more comfortable 13-point margin over Democrat Lupe Valdez.

Republicans also won every state executive and judicial race that cycle, although the margins for Lieutenant Governor, Attorney General, and Commissioner of Agriculture were within 5 points. Although Democrats failed to win any row offices, they did much better than in the 2014 midterm elections, when they lost almost every statewide election by more than 20 points.

Democrats were especially encouraged by results at the congressional level, where they flipped two suburban Romney-Clinton districts. In the 7th District, based in Houston, Democrat Lizzie Fletcher defeated Republican Rep. John Culberson by 5 points. In the 32nd District, based in Dallas, Democrat Colin Allred defeated Republican Rep. Pete Sessions by 7 points. Beyond these two flips, they were also encouraged by the fact that they came within 5 points in six other Republican-held districts: the 10th, 21st, 22nd, 23rd, 24th, and 31st.

Demographics
Texas is a racially diverse state at 41 percent Non-Hispanic White, 40 percent Hispanic or Latino, 13 percent Black, 5 percent Asian, 1 percent American Indian, and 2 percent two or more races. However, it’s important to note that the Texas electorate differs considerably from the overall population. According to Census estimates, the Texas electorate in 2016 was approximately 61 percent Non-Hispanic White, 20 percent Hispanic or Latino, 14 percent Black, and 4 percent Asian. There are several reasons why Latinos make up a much lower percentage of the electorate than the population overall. First, the Latino population skews younger — younger people are less likely to vote and minors cannot vote at all. Second, many Texas Latinos are immigrants who have not yet gained citizenship. Third, voter turnout tends to be lower among Latinos than Non-Hispanic Whites.

Like other southern states, Texas politics is racially polarized, evidenced by Trump winning white voters 69 percent to 26 percent and Clinton winning nonwhite voters 66 percent to 29 percent, according to exit polls. Trump did exceptionally well with white voters without a college degree, winning them 76 percent to 21 percent.

In Texas, the counties with the highest percent of college graduates tend to be suburban counties in the major metropolitan areas (Dallas-Fort Worth, Houston, San Antonio, and Austin). One example is Collin County, the sixth largest county by population statewide. It includes the northern suburbs of Dallas (e.g. Plano, McKinney, and Frisco) and about 52 percent of its adults have a bachelor’s degree or higher (the highest statewide). It voted for Romney by 32 points in 2012, for Trump by 17 points in 2016, and for Cruz by just 6 points in 2018.

One of the biggest demographic trends in America is that college-educated whites in southern states are voting more like college-educated whites in northern states. If this trend continues, Collin County has the potential to become much more Democratic. Westchester County, which includes the affluent northern suburbs of New York City, is actually demographically similar to Collin County. Both have similar levels of diversity (53 percent vs. 55 percent Non-Hispanic White), college degree attainment (48 percent vs. 52 percent), and median household income ($92,758 vs. $94,192). Westchester was a Republican stronghold in the 1970s and 1980s but flipped to the Democrats in the 1990s and voted for Clinton by 34 points in 2016.

If Biden wins Texas this November, it will likely be because he won or came very close in places like Collin County.

According to Census estimates, Texas’ population increased by 15 percent from 2010 to 2019, more than any other state except Utah. Population growth has been particularly concentrated in the major metropolitan areas of Dallas, Houston, Austin, San Antonio, and Midland-Odessa. This growth has benefited Democrats because the newcomers tend to be younger, more diverse, and more highly educated than Texas as a whole. 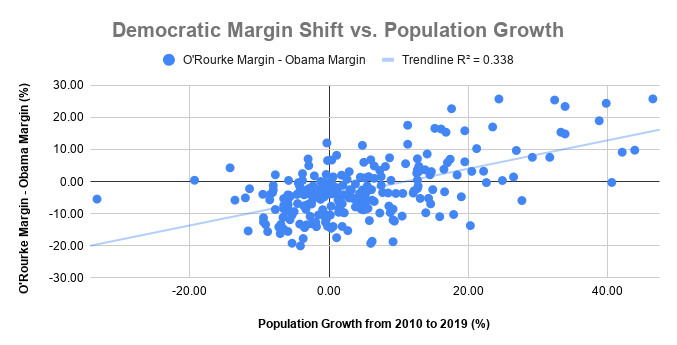 The Latino Vote
Another key to the presidential race in Texas is the Latino vote. As mentioned earlier, Latinos represent about 20 percent of the state’s electorate, although this may increase depending on demographic and turnout changes.

First, the margin among Latino voters will be important. Clinton won Latino voters in Texas 61 percent to 34 percent, according to exit polls. One of the reasons President George W. Bush won Texas so convincingly in 2004 was his strength with Latinos relative to other Republicans — he basically drew even with them in his home state. There is some worry among Democrats that Biden is underperforming with Latinos, which would hurt his chances of overperforming in a state like Texas. CNN’s Harry Enten found that Biden is winning Latinos by about 28 points right now, lower than Clinton’s 37 point margin in 2016 pre-election polls.

Second, turnout among Latino voters could make the difference. Although Latinos represented only about 20 percent of the Texas electorate in 2016, there is a lot of room for growth. According to Daily Kos Elections, about 29 percent of the citizen voting age population is Latino. If Democrats can get more of these residents to register to vote and show up at the polls, that would go a long way to boost their chances.

The Bottom Line
Texas promises to be an exciting battleground this November, with important races for president, Senate, and the House, as well as control of the state legislature. Although the state has leaned Republican relative to the nation, it may be very close this year because of the strong national political environment for Democrats, demographic trends, and explosive population growth.

Current polling confirms that Texas is a legitimate battleground. According to the RealClearPolitics average through September 17, Trump led Biden by 3.5 points.

Democrats have been talking about Blue Texas for a long time now, but this may be the year they finally get it done.

This story first appeared in Inside Elections with Nathan L. Gonzales on September 18, 2020.