There’s one week to go before the redo election in North Carolina’s 9th District on Sept. 10., and all indications show that Republicans and Democrats know that this is a close race. Polling remains very tight and within the margin of error.

These off-year special elections always receive oversized coverage in the media and in political circles as they’re often seen as bellwethers of larger coming attractions. That’s especially true in a year such as 2019 on the cusp of a presidential election year. This has led us to a very spirited and expensive race between 2018 Democratic nominee Dan McCready and state Sen. Dan Bishop.

Big Spenders
To date, spending on local broadcast, local cable, satellite and radio totals following the May primary stands at $13 million. The spending is pretty much equal at this point with the Democratic side spending about $214,000 more than the Republicans. McCready has outraised Bishop significantly and that has the Democrat outspending his Republican opponent by a 3 to 1 margin. In addition, the McCready campaign ($481,000) is also outspending Bishop ($38,000) nearly 13 to 1 on Facebook.

Broadcast television leads the spending to date comprising nearly $10 million of the roughly $13 million already and projected to be spent. Local cable has taken nearly $2.5 million with the remainder spread across radio and satellite TV. The spending has overwhelmingly taken place in Charlotte with much smaller amounts spread between the Raleigh and Myrtle Beach markets. 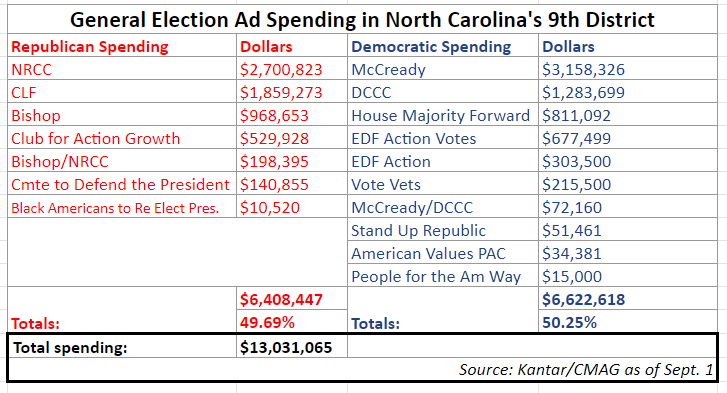 Message Matters
The overwhelming themes in this race echo a lot of the same issues and narratives we saw dominate the 2018 midterms.

The McCready campaign has shown the same messaging discipline demonstrated by Democratic House candidates last year. Its spending is dominated by health care with the candidate promising to make affordable health care achievable for his constituents. McCready is specifically aiming his message at the cost of prescription drugs and he’s airing ads pointing out that Bishop’s voting record in the state Senate had him vote against a bill that the McCready campaign says would have lowered the price of prescription drugs in North Carolina.

A lot lower on the priority list is McCready’s experience in the solar industry and his promise to make North Carolina a leader among the states where this alternative energy source is concerned. McCready argues that his experience creating good jobs would be important for the district. More recent ads by McCready are pushing back against the notion that he’s a Socialist. McCready points to his experiences in the military as an important part of his background and that he’s eager to work with both parties on matters of importance to the district. He denies he’s a Socialist.

On the Republican side, the Bishop campaign and its allies are making arguments that he’s a stronger choice than McCready for improving border security and building the wall on the southern border, thereby improving public safety. Bishop has taken to calling himself the “Right Dan” and groups supporting Bishop have taken aim at McCready’s tenure at the solar energy company accusing him of playing “insider” using the lobbying game for massive tax breaks and purchasing much of the company’s equipment from questionable Chinese sources thereby impacting domestic jobs. These ads, that have accused McCready of corruption, have labeled him “Dan McGreedy.”

Can McCready continue to use the issues that led to big gains for the Democrats last year and can Bishop turn the nationwide Democratic tide by emphasizing subjects that proved somewhat ineffectual for Republican House candidates? Democrats can point to several districts that Trump carried in 2016 that are now being represented in the House by a Democrat. Is this district heading in the same direction? Can the President, whose endorsement of Bishop and labeling of McCready as a socialist in Bishop’s latest ads, help pull the Republican candidate across the finish line? We have a week to find out.

Steve is Vice President and General Manager at Kantar/CMAG.

This story first appeared in InsideElections.com on September 3, 2019.