On Nov. 16, Nevada Gov. Steve Sisolak signed his state’s new congressional maps into law. The map was drawn and passed by the Democratic-controlled state legislature and signed by Sisolak, also a Democrat, the same day.

But that could change in 2022 because of a gamble Democrats are taking. 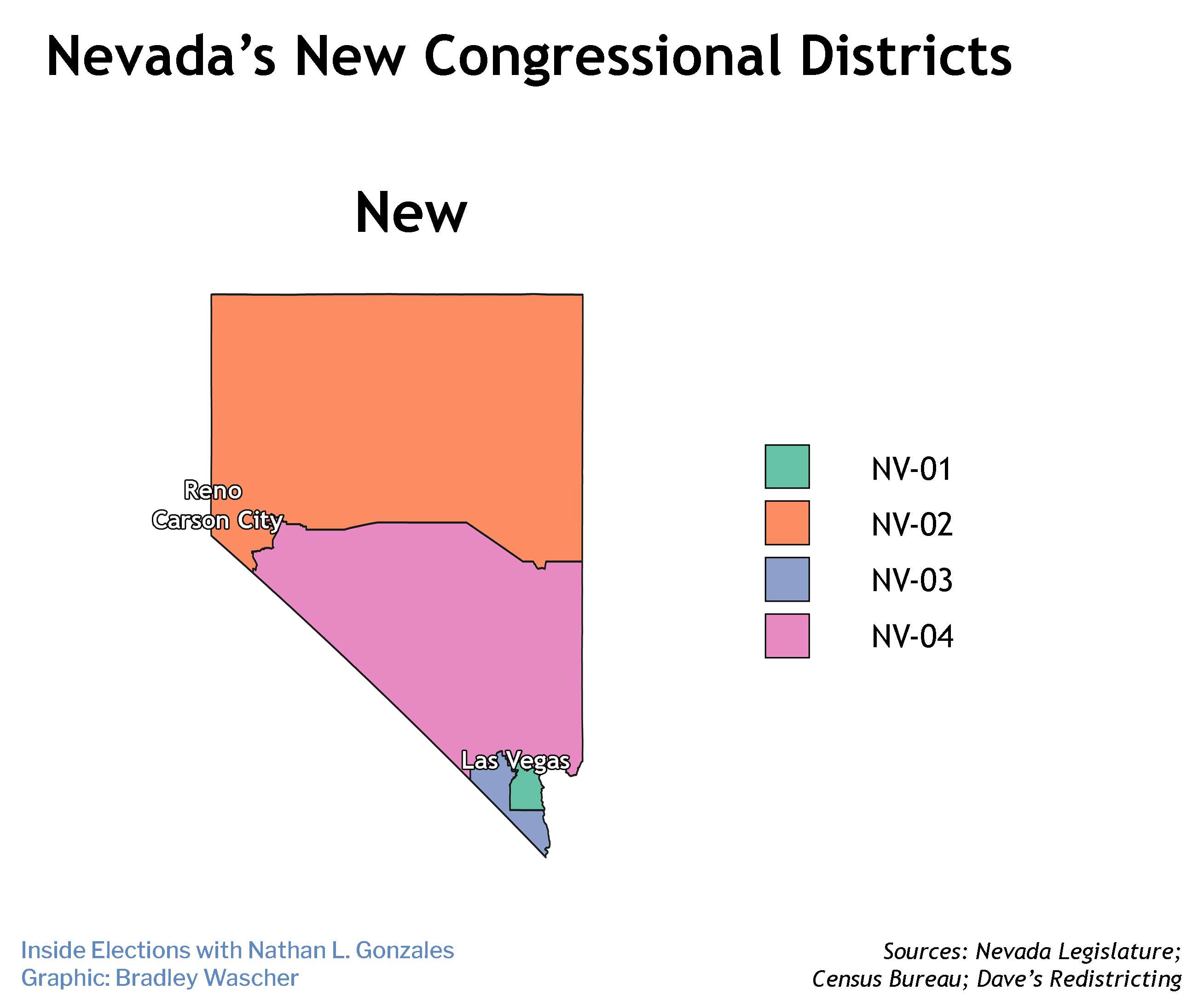 Nevada Democrats have “unpacked” the Las Vegas-based 1st District, in an effort to ease the re-election efforts of Reps. Susie Lee and Steven Horsford, whose 3rd and 4th districts sit to the south and north of Las Vegas, respectively. Because many of the 1st’s Democratic voters have been parceled out to its two neighbors, the district will be competitive for the first time in a decade.

That means that none of the state’s four seats will be rated Solid Democratic heading into what looks to be a brutal cycle for Democrats, and creates the possibility that Republicans could sweep all four districts. A status quo map would have preserved at least one Democratic seat.

It’s not yet clear how bad 2022 will be for Democrats, and the new map does create three seats Biden carried by at least 7 points in a state that Biden only carried by 2 points, giving all three Democratic incumbents decent starting positions.

But in a politically temperamental state such as Nevada, Democrats could be tempting fate at an inopportune moment when a loss of just five seats will cost them the House majority.

1st District
The 1st is the most radically altered of the state’s four districts. Under the old map, the 1st was a compact rectangle centered directly on the Las Vegas strip, which it fully encompassed. It spanned just a few miles east to west (from the Clark County Wetlands to Spring Valley) and south to north (from McCarran Airport to North Las Vegas).

The new district is also plurality white, while the old district was plurality Hispanic. Back in 2012, when the district was redrawn to be plurality Hispanic, many Democrats hoped it would elect Nevada’s first Hispanic representative. Instead, it was Titus who boxed out state Sen. Ruben Kihuen, an immigrant from Mexico, in the primary (Kihuen would still be Nevada’s first Hispanic representative, winning the 4th district four years later but leaving office two years later under a cloud of scandal).

Titus currently has one primary challenger, progressive Amy Vilela, who ran for the 4th District in 2018. Vilela garnered just 9 percent in that race but was featured in the documentary Knocking Down the House alongside now-Rep. Alexandria Ocasio-Cortez, and in 2020 Vilela was a co-chair of Sen. Bernie Sanders’ Nevada campaign. But Vilela’s chances will take a hit now that Hispanic voting power in the district is diluted.

Two Republicans are running: former Trump campaign staffer Carolina Serrano, and retired Army Col. Mark Robertson. Titus should be secure in the next general election, but if the national environment gets worse for Democrats, she could be in a competitive race for the first time since 2010. If that happens, Democrats are in danger of getting swept out of the delegation entirely because they’ll no longer have one Vegas-based district to rely on. Likely Democratic.

2nd District
The lone GOP-held district in the state remains largely unchanged. It occupies the northern third of the state, and includes Carson City and Reno. The most notable change is the addition of vast but largely unpopulated White Pine County, previously in the 4th District. Under the new lines the 2nd would have voted for Trump by 11 points, 54-43 percent, compared to 53-43 percent under the old lines.

Rep. Mark Amodei had a cancer scare earlier in the year, and considered running for governor against Sisolak, but decided to run for re-election instead. He won his last election 57-41 percent. Democrats are increasingly focused on Washoe County, which makes up two-thirds of the district, but won’t be winning this district anytime soon. Solid Republican.

3rd District
The main beneficiary of Nevada’s redistricting is Democratic Rep. Susie Lee, whose 3rd District will get substantially more Democratic. For the past decade, the 3rd has encompassed the southern parts of Las Vegas and everything below it, a mix of ritzy areas such as Summerlin South, a major city (Henderson) and rural desert towns. According to Daily Kos Elections, it was one of just five congressional districts in the country to vote for Obama in 2012, Trump in 2016, and Biden in 2020, underscoring how consistently divided the electorate is.

Under the new lines, the 3rd sheds Henderson and Boulder City to the 1st, and picks up parts of Las Vegas rich with Democratic votes. The new district would have voted for Biden by a slightly more robust 7 points, and for Rosen in 2018 by 12 points (compared to 3 points under the old map).

That gives Lee a bit of breathing room, though if the national environment continues to sour for Democrats, she could be in danger. Three Republicans are already running, including attorney April Becker, who narrowly lost a state Senate race last year and has House GOP Conference Chairwoman Elise Stefanik’s endorsement. Lean Democratic.

4th District
Democratic Rep. Steven Horsford’s central Nevada and North Las Vegas district was tweaked at the Las Vegas margins, shedding Summerlin to the 3rd District, and trading away some of Sunrise Manor to the 1st District in exchange for Democratic areas around Twin Lakes.

Under the old lines, Biden carried the 4th District by 4 points, 51-47 percent. Under the new lines, that margin would double to 53-45 percent.

Horsford, who previously represented the 4th District from 2012 to 2014, won his seat back in 2018 by 8 points, 52-44 percent. In 2020, he turned back Republican Jim Marchant, 51-46 percent. The mid-race revelation of an earlier affair with a Senate staffer did not seem to hinder his campaign.

Sam Peters, a Republican Air Force veteran who placed second in the GOP primary for this seat last year, is running again.

Horsford is no stranger to tough cycles, and he’ll enter 2022 with the partisan lean of the district in his favor and a substantial financial advantage. But depending on how bad things get for Democrats, this district could start looking more vulnerable. Likely Democratic.

This story first appeared in Inside Elections with Nathan L. Gonzales on December 3, 2021.