With some bipartisan consensus, it appears Maryland finally has a final, final congressional map.

Back in December, Democrats in the Maryland state legislature used their supermajority to pass a new congressional map over the objection of the state’s Republican governor, Larry Hogan.

While that map’s lines were not nearly as tortured as the ones in place for the last decade, it was still designed to keep seven safe Democratic seats and also put the state’s lone GOP congressman, the 1st District’s Andy Harris, at risk for the first time in 10 years.

However, on March 25 a state judge tossed out the new map as an “extreme partisan gerrymander.” After briefly considering an appeal, Democrats instead chose to draw a remedial map themselves, which Hogan then signed into law.

The remedial map significantly alters the partisanship of two of the state’s eight districts: the 1st and the 6th. It effectively places Harris, the last Republican standing, out of reach for Democrats, and sets 6th District Democrat David Trone up for a potentially competitive race.

In all likelihood, this map should return a 7D-1R delegation this fall, but in the event of a massive Republican wave, the delegation could revert to 6D-2R for the first time in a decade. 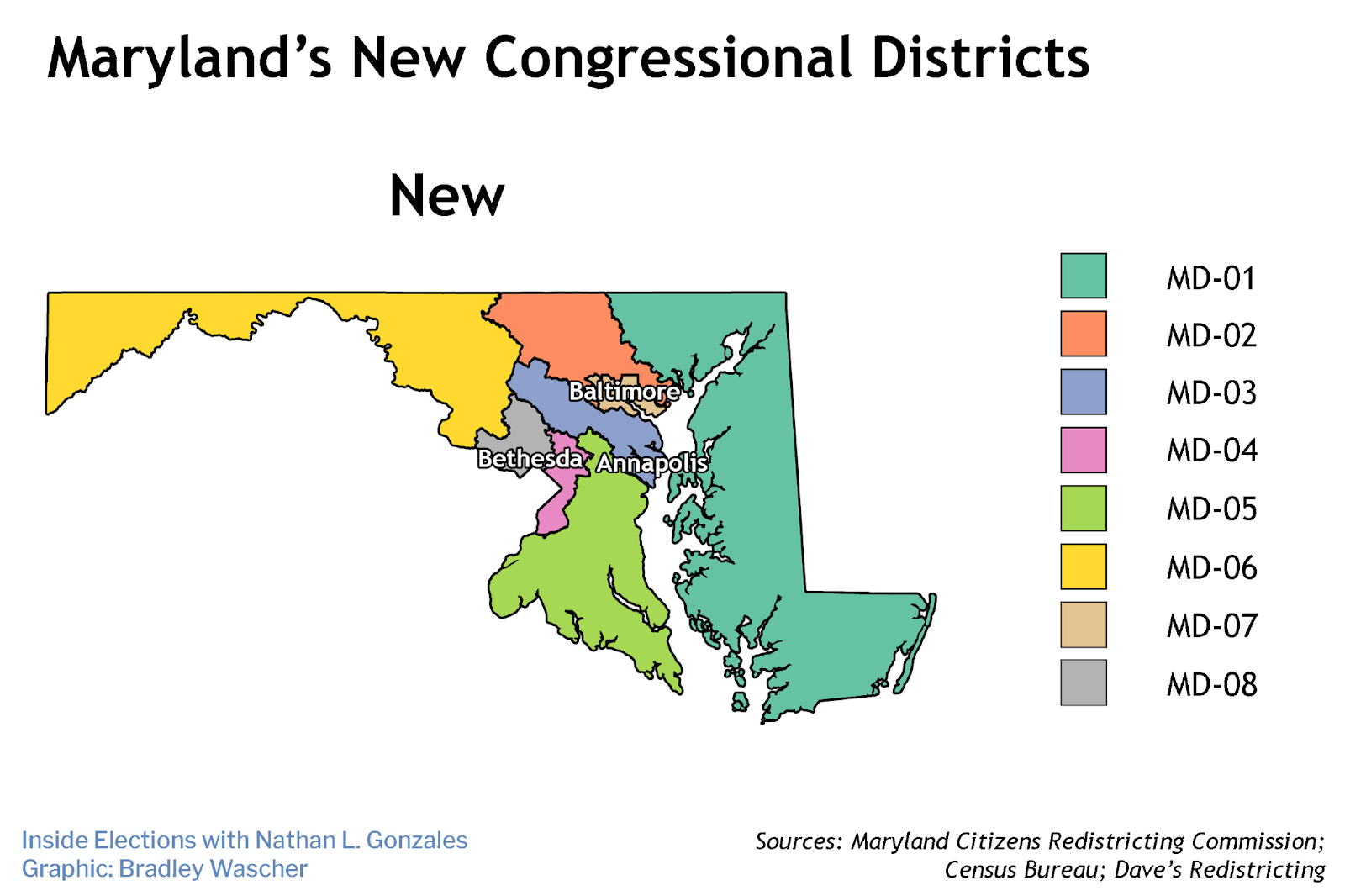 1st District
The most substantial effect of the change in maps is that the Eastern Shore-based 1st District will not become competitive this year after all. Originally, Democrats removed GOP-leaning Harford and Carroll counties in northern Maryland from the district, and appended to the 1st Democratic-leaning areas in Anne Arundel County north of Annapolis.

Under the remedial map, the 1st remains entirely on the Eastern Shore, with no arm jutting across the Chesapeake Bay to Anne Arundel County, and also retains all of Harford County. Trump would have carried the new 1st by 14 points, 56-42 percent. That’s less than his previous margin, and potentially even enough to make this district competitive under the best circumstances for Democrats.

But 2022 is shaping up to be a bad year for Democrats, meaning that Republican Andy Harris no longer has much to worry about. He’ll still face a credible Democratic challenger in former state Del. Heather Mizeur, but Mizeur’s chances were always contingent on a favorable redrawing of the district. She thought she got it, but she didn’t. Move from Lean Republican to Solid Republican.

The partisanship is largely unchanged: Biden would have carried it, 58-39 percent, compared to 65-32 percent last decade. Democrat Dutch Ruppersberger will have to acquaint himself with lots of new voters, but after activist Brittany Oliver ended her primary campaign the incumbent doesn’t have much to worry about. Solid Democratic.

3rd District
The defunct map would have radically altered the 3rd District, which had been one of the most twisted of last decade’s districts. The remedial map’s 3rd is closer in character to the old district in that it is still situated south of Baltimore City, and doesn’t extend all the way north past Baltimore to Harford County.

But the 3rd is also highly compact, which is a serious departure from the old district. Now it simply begins in the northern half of Anne Arundel County, extends west through all of Howard County, and picks up a little bit of southern Carroll County.

Biden would have carried the new district, 61-36 percent. For Democratic Rep. John Sarbanes, that means it’ll be a straightforward November. Solid Democratic.

Democratic Rep. Anthony Brown is running for Maryland attorney general, so this is an open seat, and the real fight is in the Democratic primary, as Biden would have carried the district, 89-9 percent.

The top-fundraising candidate is former PG County state attorney Glenn Ivey, who finished second to Brown in the 2016 primary for this seat; he had $238,000 in the bank on Dec. 31. State Del. Jazz Lewis has endorsements from House Majority Leader Steny Hoyer, who represents the district next door, and a bevy of state legislators. He had $174,000 on Dec. 31. And former Rep. Donna Edwards, who held this seat from 2009 to 2017, is making a second comeback bid after losing the PG County executive race in 2018; she’s running as a progressive and has backing from Massachusetts Sen. Elizabeth Warren and Washington Rep. Pramila Jayapal. Former state Del. Angela Angel is also running. Both Edwards and Angel have yet to file their first fundraising report with the FEC.

At the moment, this looks like a close race between Ivey, Lewis, and Edwards. The winner will be headed to Congress. Solid Democratic.

The most significant change is the excision of College Park — home of Hoyer’s alma mater University of Maryland, where the longtime incumbent is known to roam the campus. Biden would have carried the new district, 67-31 percent, meaning any trouble for Hoyer would come in a primary.

With a voting-age population that is approaching majority-Black status, the rapidly diversifying 5th will be ripe for a Black Democratic representative, but likely not until the 82-year-old Hoyer retires. His one primary challenger, activist McKayla Wilkes, had just $16,500 in the bank on Dec. 31, and lost to Hoyer by 38 points two years ago. Solid Democratic.

6th District
The other district that saw its partisanship significantly altered was Democratic Rep. David Trone’s 6th District in Western Maryland. Under both the old map and the remedial map, the 6th extended east from the deeply Republican Panhandle down into the overwhelmingly Democratic inner Montgomery County suburbs, and also extended into Frederick County to grab the city of Frederick.

But in the new map, the 6th instead takes in all of evenly divided Frederick County, and while it still extends into Montgomery County it now stops at Gaithersburg, leaving out more liberal areas closest to Washington, D.C.

That makes life more difficult for Trone in the race against his likely GOP opponent, state Del. Neil Parrott. In 2020, Trone beat Parrott, 59-39 percent, but now the district is about 13 points more Republican than it was in 2020, and the national environment is going to be worse for Democrats as well.

The good news for the two-term Democrat is that he’s one of the wealthiest members of Congress and has already spent upward of $32 million on past races, so he’ll have a massive financial advantage over Parrott. But the bottom line is he’s now in a competitive race, whereas under the defunct map he wouldn’t have been. Move from Solid Democratic to Likely Democratic.

Biden would have carried the seat, 81-18 percent. So Democratic Rep. Kweisi Mfume will be headed back to Congress. Solid Democratic.

Instead, Democratic Rep. Jamie Raskin’s seat is now a compact block spanning the eastern half of Montgomery County, minus a small piece of Burtonsville in the northeast corner. The suburban DC district is significantly more Democratic as a result of losing GOP-leaning Carroll and Frederick Counties to the north; it would have voted for Biden, 80-18 percent, compared with 69-29 percent under the old lines. Raskin, who led the second impeachment of Trump and is a member of the Jan. 6 committee, is increasingly emerging as a new conscience of the Democratic Party. Solid Democratic.

This story first appeared in InsideElections.com on April 11, 2022.