Louisiana Redistricting: Not Much New from Baton Rouge

With Louisiana retaining its six House districts for another decade, many Democrats had hoped for the creation of a second majority-Black seat to go alongside the current 2nd District; the state is 33 percent Black but just one of six seats (17 percent) is majority Black. . In March, Democratic Gov. John Bel Edwards vetoed the plan passed by the Republican-controlled Legislature, which didn’t include another heavily Black seat, on these grounds.

But with the help of a few crossover votes in the state House, the legislature overrode the governor’s veto — the first veto override in Louisiana in three decades — meaning the plan will stand, barring any legal developments.

The result is a largely status-quo map, with each new district retaining, on average, 96 percent of its current configuration’s population, based on calculations from Daily Kos Elections.

Elections in Louisiana are notable for their unique “jungle” primary system, in which all candidates appear on the same Nov. 8 ballot regardless of party, with the top two advancing to a Dec. 10 runoff should none receive a majority. But not even blanket elections can change the extreme partisanship of the state’s six seats.

The median Republican-leaning district in Louisiana would have voted for President Donald Trump by 33.3 points in 2020, according to a composite of all nine statewide and federal races between 2016 and 2020 calculated by Inside Elections. Likewise, Louisiana’s lone Democratic-favored district, the 2nd, backed Joe Biden by over 50 points.

Republicans currently hold five seats in the Louisiana congressional delegation, compared to Democrats’ one. This breakdown is likely to persist well beyond 2022, as Democrats’ once-strong statewide performances appear to be a vestige of a time gone by. 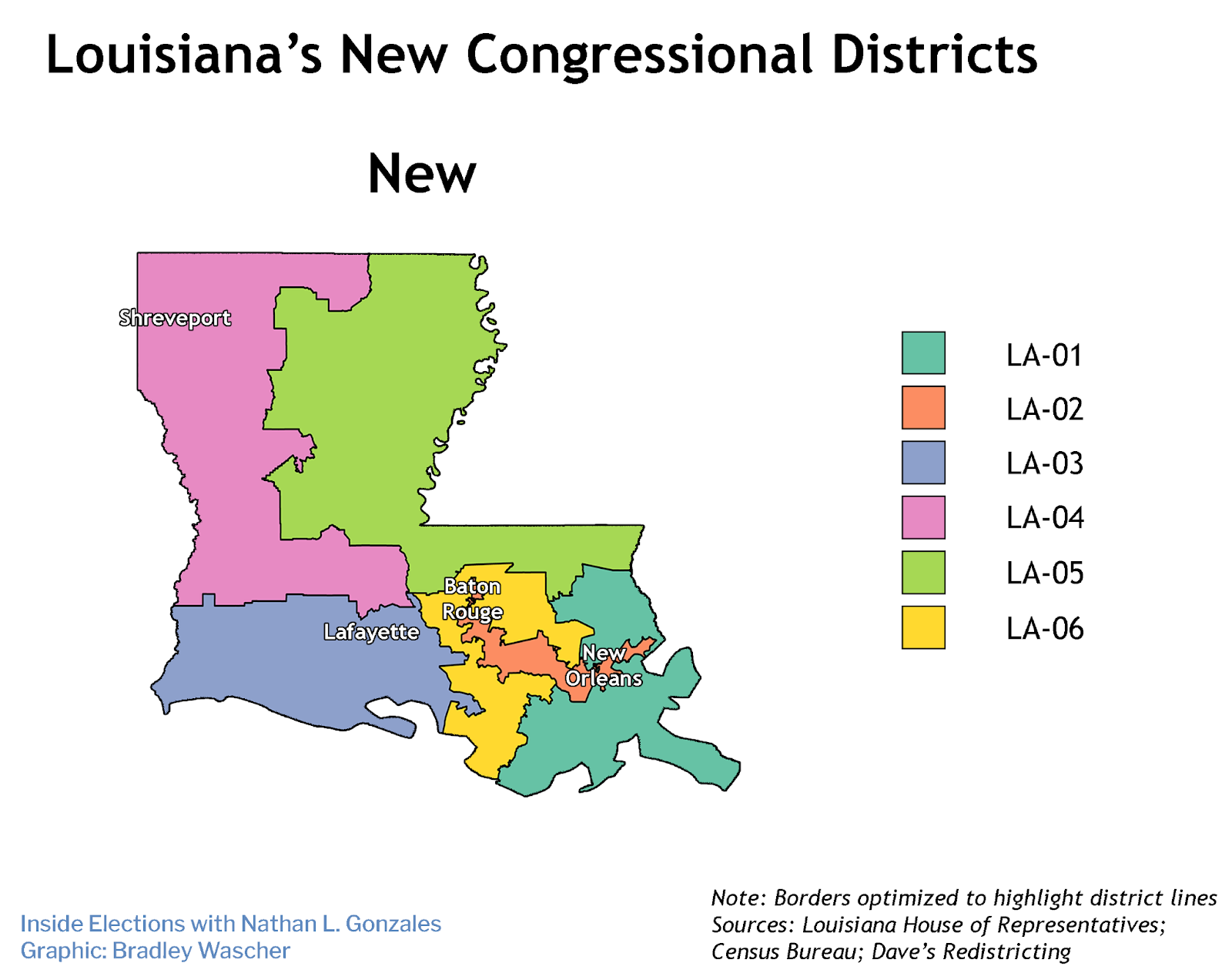 1st District
The 1st is located in southeastern Louisiana, including St. Tammany Parish and parts of Jefferson Parish. The district’s boundaries have shifted slightly around the edges, most notably in Tangipahoa and Terrebonne parishes, but not much else is different. The district is still deeply Republican, voting for GOP candidates by an average of 41.9 points, according to the 2016-2020 composite of previous statewide and federal elections. Trump would have carried the district by 38 points in 2020, 68-30 percent, so there’s little to worry about for Republican Rep. Steve Scalise, the House minority whip. Initial Rating: Solid Republican.

2nd District
Snaking through the state to connect portions of New Orleans and Baton Rouge, the 2nd is nearly identical to its current configuration, save for a handful of traded precincts throughout. The majority-Black district preferred Democrats by an average of 46.8 points in the composite of 2016-2020 elections, making it the only Democratic-favored district in the state. Biden would have won the district by 52 points in 2020. Democratic Rep. Troy Carter was elected in April 2021 following a special election to replace former Rep. Cedric Richmond, who gave up the seat to take a position in the Biden administration (a position from which Richmond recently departed). Carter will almost surely be elected to his first full term this November. Solid Democratic.

3rd District
The 3rd covers southern Acadiana, with the district’s largest cities being Lafayette and Lake Charles. Changes here were minimal as well: the 3rd now fills St. Mary Parish in exchange for what little reach it had into St. Landry parish. Republican Rep. Clay Higgins is in no real danger in this district that had an average partisanship of R+39.9 in the 2016-2020 composite and would have voted for Trump by 38 points in 2020. Solid Republican.

4th District
The 4th, home to Shreveport and Bossier City, spans northwestern Louisiana. Under the new map, it gains area in Grant and St. Landry parishes. The 4th voted for Republicans by an average of 25.6 points in statewide and federal elections between 2016 and 2020, while Trump would have carried the district by 24 points in 2020. Republican Rep. Mike Johnson should be fine. Solid Republican.

5th District
The northeastern 5th contains Monroe and Alexandria. The biggest changes are that the district picks up voters in Pointe Coupee, East Feliciana, and St. Helena parishes, in return dropping portions of Grant Parish and all of St. Landry Parish. Republican Rep. Julia Letlow was elected to the seat in a special election following the death of her husband, Luke, who died from complications of Covid-19 less than a week before he was to be sworn in to his first term. There is little standing in the way between Letlow and her first full term: the district, which would have voted for Trump by 30 points in 2020, more broadly preferred Republican candidates by an average of 29.2 points in the composite of 2016-2020 elections. Solid Republican.

6th District
The 6th is based around West Baton Rouge and East Baton Rouge parishes. It shifts slightly south under the new lines, losing its reach into Pointe Coupee, East Feliciana, and St. Helena parishes — but it remains reliably Republican, with an average partisanship of R+31.6 according to the 2016-2020 composite. Republican Rep. Garret Graves, who won his seat in 2014 following a highly publicized race against colorful former Democratic Gov. Edwin Edwards, is in a good position to win his fifth term.

Interestingly, the 6th would have been the best-performing GOP-held district for Democratic Gov. John Bel Edwards (no relation to Edwin) in the 2019 governor’s race: he lost by just under 5 points, 52-48 percent as he won statewide by 2 points. But Trump would have won here by 33 points in 2020, a more representative depiction of how the district tends to vote. Solid Republican.

This story first appeared in InsideElections.com on May 24, 2022.