Despite some drama, Kentucky’s new congressional map is poised to solidify the delegation’s existing partisan breakdown.

Heading into redistricting, the Republican-controlled state legislature had the opportunity to go aggressive and potentially move the Democratic-held 3rd District into the GOP’s column. But ultimately Republicans left the 3rd intact, and made only minimal changes statewide compared to the current lines.

The new map has received much pushback from Democrats. It was vetoed by Democratic Gov. Andy Beshear upon arriving at his desk, but that veto was quickly overridden by the General Assembly (veto overrides only require a simple majority in Kentucky). The map now faces a lawsuit from the Kentucky Democratic Party which argues that the sprawling 1st District intentionally dilutes Democratic votes.

Legality aside, none of Kentucky’s congressional districts look to be electorally exciting. The GOP-held 6th District is nominally the most competitive seat, but is at best a longshot for Democrats.

Kentucky’s congressional delegation will likely continue to contain five Republicans and one Democrat following the 2022 midterm elections and beyond. 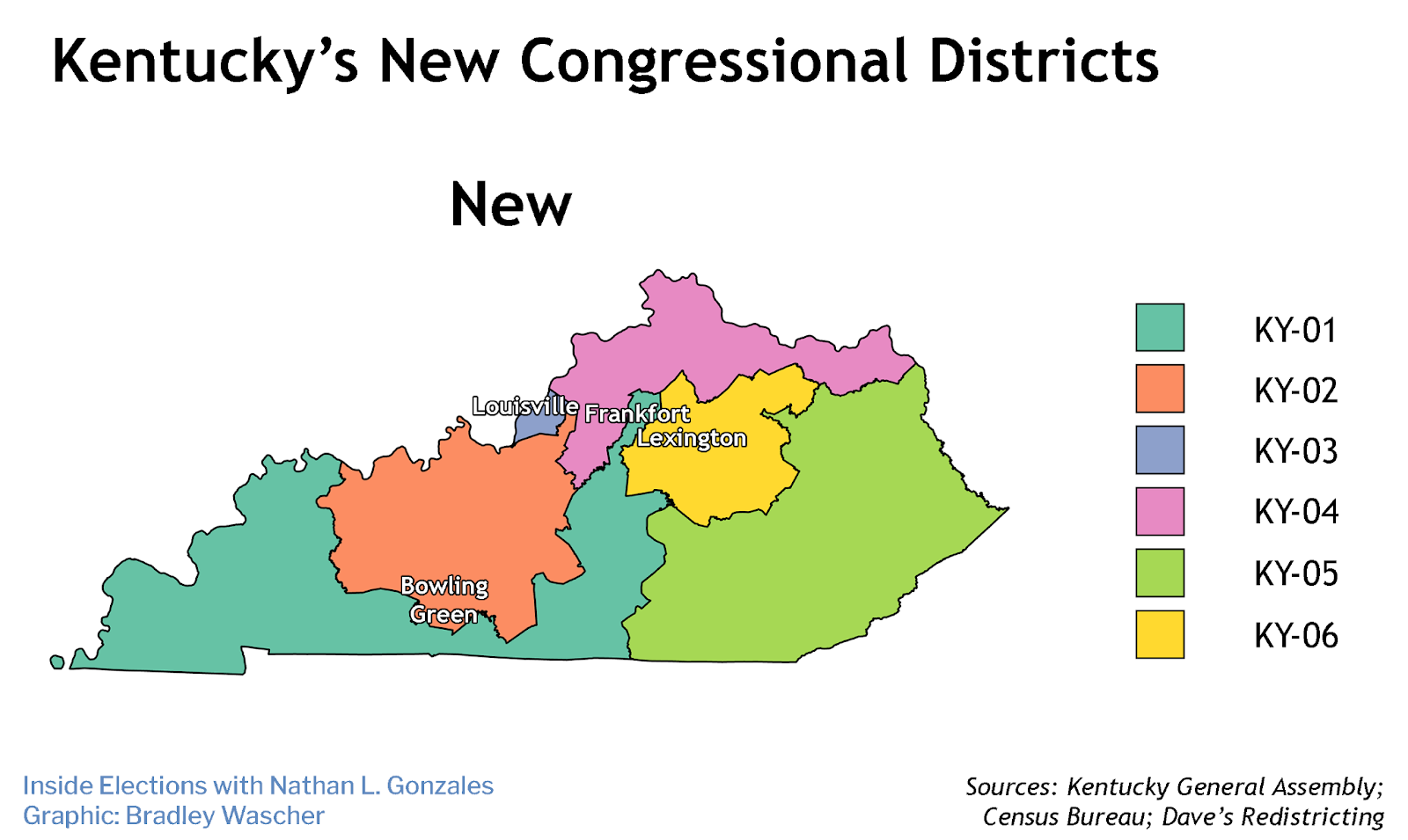 1st District
The 1st is Kentucky’s westernmost district, including the city of Paducah and spanning 35 counties. In terms of geographic changes, the district now snakes north through Washington and Boyle counties as well as portions of Anderson County to also take in Franklin County (and the capital, Frankfort). It loses McLean, Muhlenberg, and Ohio counties in return.

Rep. James Comer, the top Republican on the House Oversight and Reform Committee, is in no apparent danger. Only one Democrat is running, therapist Jimmy Ausbrooks, who also campaigned for Senate in 2020. Across a composite of 10 federal and statewide elections in Kentucky between 2016 and 2020 calculated by Inside Elections, the 1st preferred Republicans by an average of 31.6 points. Former President Donald Trump would have carried the district by approximately 43 points in 2020, according to Daily Kos Elections, and former Republican Gov. Matt Bevin would have won by 16 points in 2019. Initial Rating: Solid Republican.

2nd District
The 2nd serves the cities of Owensboro, Elizabethtown, and Bowling Green, home to Western Kentucky University. Under the new lines, the district trades its eastward reach into Washington, Mercer, Boyle, Garrard and Jessamine counties for a slice of Jefferson County, while also losing McLean, Muhlenberg, and Ohio counties in the west. These changes shouldn’t be an issue for GOP Rep. Brett Guthrie, who faces no real opposition. The 2nd District preferred Republicans by an average of 25.8 points in the 2016-2020 composite. It would have voted for Trump by 37 points in 2020 and for Bevin by 9 points in 2019. Solid Republican.

3rd District
The 3rd District contains Louisville. Despite some GOP legislators’ calls to divide the Democratic votes in Jefferson County and dissolve this dependably Democratic seat, the final version of the new district is virtually unaltered. With an average partisanship of D+25 in the 2016-2020 composite, this is Kentucky’s only Democratic-leaning district.

Rep. John Yarmuth is retiring after eight terms. The field of Democrats to replace him includes state Sen. Minority Leader Morgan McGarvey, who is the best-funded candidate and has the endorsement of Yarmuth, as well as progressive state Rep. Attica Scott. On the Republican side, Mike Craven, who finished second and third in the last two 3rd District GOP primaries, is running, as is businessman Stuart Ray. But in this district that preferred President Joe Biden by 22 points in 2020 and Beshear by 38 points in 2019, winning the Democratic primary will almost surely mean winning the general election. Solid Democratic.

4th District
Kentucky’s northernmost district, the 4th, contains the suburbs of Louisville and Cincinnati. The district remains largely similar to its previous configuration, with the most noticable differences being the full absorption of Spencer County and the partial addition of Nelson County toward the west. The 4th is still reliably Republican: it preferred Republicans by an average of 25.2 points in the composite of 2016-2020 statewide and federal elections, while Trump would have carried the district by 33 points in 2020, and Bevin would have won by 8 points.

The seat is currently held by Republican Rep. Thomas Massie, who has long vexed GOP leadership, including Trump. After attempting to force an in-person vote on the CARES Act in 2020, Massie faced a primary challenge, which he ended up winning, 81-19 percent. He once again will face a primary challenge in 2022, this time from Claire Wirth, a real estate investor who takes cues from the likes of Trump and Georgia Rep. Marjorie Taylor Greene. Massie starts with a substantial cash advantage: he had $158,000 cash on hand on Dec. 31, while Wirth was carrying $23,000 in debt. Solid Republican.

5th District
The 5th covers eastern Kentucky and includes the cities of Pikeville and Somerset. Under the new map, the district gains Wolfe, Menifee, and portions of Bath counties, and it also trades parts of Carter County for parts of Boys County. According to the composite of 2016-2020 statewide elections, the 5th had an average partisanship of R+40.8, making it the most heavily Republican district in Kentucky; it would have voted for Trump by 59 points in 2020 — the president’s second-best district anywhere in the country — and for Bevin by 21 points in 2019. Republican Rep. Hal Rogers is on pace to win a 22nd term. Solid Republican.

6th District
The 6th keeps Lexington but now sports a more compact shape. Most notably, the district loses Franklin County and the capital of Frankfort, while also shedding many smaller counties in the periphery. The 6th is a few points more favorable for Republicans as a result of the changes: it preferred Republicans by an average of 6.9 points according to the composite of 2016-2020 elections. It would have voted Trump by 11 points in 2020 and Beshear by 11 points in 2021 — making it the only district in Kentucky to have flipped between any of the elections in the composite. But that doesn’t necessarily endanger Republican Rep. Andy Barr, who had a close call in 2018 but won by 16 points in 2020. Combine Barr’s $2 million war chest with a national environment that will probably be favorable for his party, and it’s difficult to imagine any of his Democratic opponents putting this seat in play. Solid Republican.

This story first appeared in InsideElections.com on February 22, 2022.