Republicans defeated two of the three Democratic members in Iowa in 2020 and are hoping to finish the job next year. Beating Democratic Rep. Cindy Axne would give the GOP full control of the four-member delegation and a net gain of one seat on their march to the majority.

After rejecting the first map drawn by the nonpartisan Legislative Services Agency, the Iowa state legislature approved a second LSA-drawn map on Oct. 28 and Gov. Kim Reynolds, a Republican, signed it into law on Nov. 4. The vote was bipartisan and nearly unanimous, a contrast with the first map, which Republicans rejected in the state Senate by a party line vote.

Iowa’s redistricting process is unique in that it is primarily handled by the LSA, a nonpartisan research and analysis agency, and not politicians or a bipartisan commission. The LSA is not permitted to consider incumbent residences or political data, and must try to keep each of Iowa’s 99 counties whole. The scheme results in more consistently competitive congressional elections, and that trend looks to continue into the next decade.

Like the old map, the new map features three Republican-tinted but competitive districts, and one solidly Republican district in the state’s northwest corner. And similar to the old lines, all four new districts would have been carried by President Donald Trump in the 2020 presidential election (when he won the state by 8 points). Though in 2018, Democratic gubernatorial nominee Fred Hubbell would have carried three of four of the new districts despite losing statewide by 3 points.

1st District
The new 1st is the successor district to the old 2nd. It covers the southeast corner of the state, and contains Iowa City and Davenport. The district surrendered eight southern counties to the new 3rd District to the west. One of those — Wapello County (Ottumwa) — is where current 2nd District incumbent Marianette Miller-Meeks lives. But Miller-Meeks has said she will move from Ottumwa and run in the new 1st, rather than run in the new 3rd District, which contains little of her old territory. (According to the Constitution, members only have to live in the same state and not in the specific district they represent.)

From 2006 through 2020, the southeast corner was represented by Democrat Dave Loebsack, who Miller-Meeks tried unsuccessfully to unseat three times. In 2020, Loebsack retired and Miller-Meeks defeated former state Sen. Rita Hart by six votes, the closest congressional election in years.

State Rep. Christina Bohannon, a law professor at the University of Iowa, is running as a Democrat in the new 1st District, and had $243,000 in the bank at the end of September.

Democrats have a history of overperforming the top of the ticket in this district, and Miller-Meeks is not the strongest incumbent. But the national environment will likely be in Republicans’ favor next year, meaning Democrats will be focused mainly on defending their incumbents. And as a Trump district, the 1st won’t be in the first tier of the few pickup opportunities Democrats will pursue. So at least for now, this race begins as Likely Republican.

2nd District
The new 2nd occupies the northeast corner of the state and is the successor to the old 1st District. It includes Dubuque, Cedar Rapids, and Waterloo, and also picked up Mason City as well as several other counties from the 4th District.

The incumbent is Ashley Hinson (currently of the 1st District), a freshman Republican who defeated Democratic Rep. Abby Finkenauer 51-49 percent in 2020. Hinson is running for re-election.

Hinson faces one announced challenger, Democratic state Sen. Liz Mathis, who has locked up support from the state’s Democratic political establishment. Like Hinson, Mathis is a former TV news anchor for KCRG (the ABC affiliate in Cedar Rapids), and she’s a credible candidate for Democrats who’s raised good money so far (though much less than Hinson, who is a top House GOP fundraiser).

But the Republican lean of the district, the poor national environment for Democrats, and the historical trend of midterm elections breaking against the party in power all make this an uphill climb for Mathis or any Democrat in 2022. So this race begins as Likely Republican. 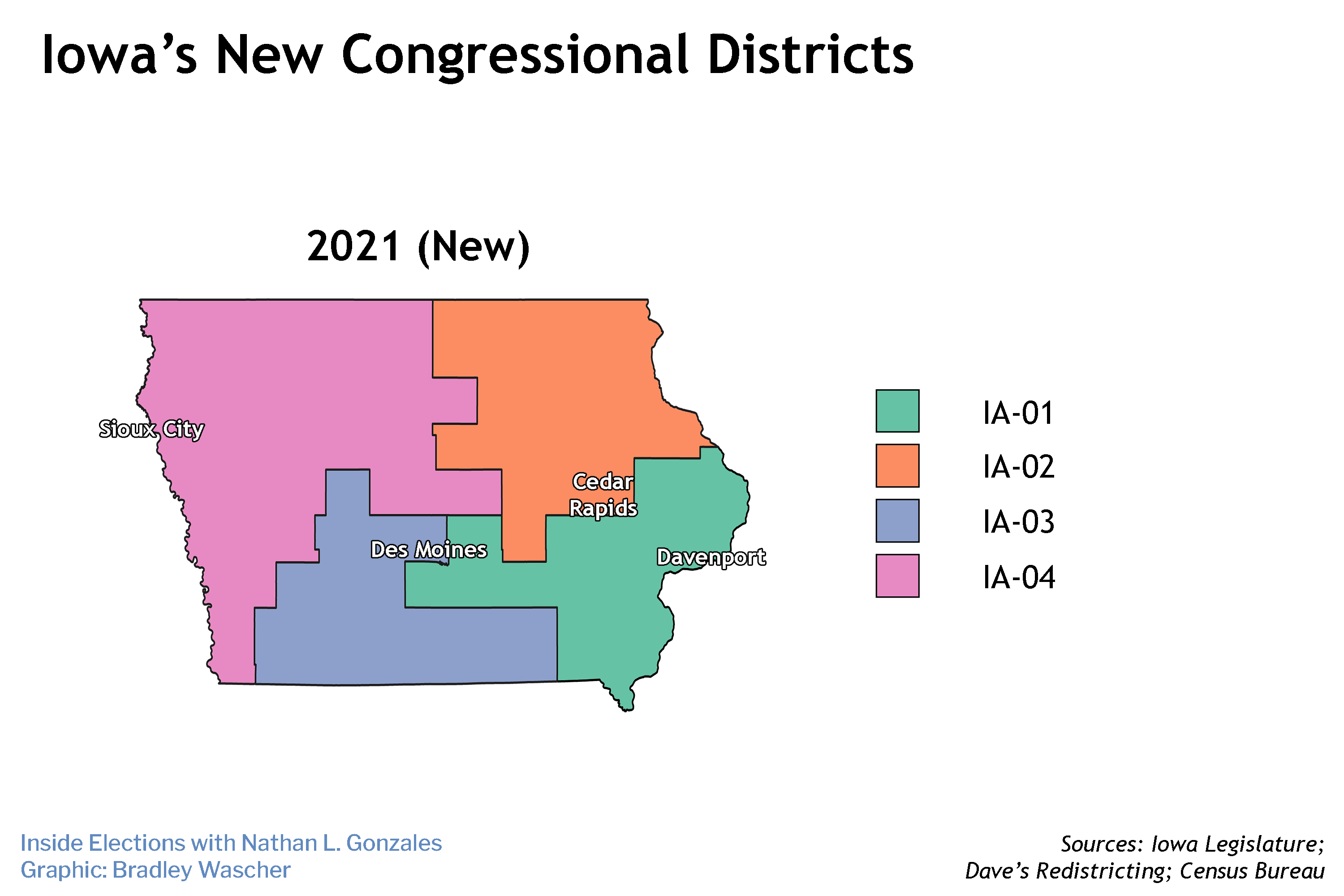 3rd District
The 3rd is home to the sole remaining Democratic member of the state’s delegation, Axne, who says she is still deciding between running for re-election and running for governor against Reynolds.

The new 3rd is still anchored by Des Moines, but now includes several counties to the east, stretching to Ottumwa.

Several Republicans — including state Sen. Zach Nunn, former state Rep. Mary Ann Hanusa, and Ted Cruz-endorsed financial planner Nicole Hasso — are lining up for a chance to take on Axne, and the national GOP has made her one of their main targets. Democrats acknowledge she’s one of their most vulnerable incumbents (if she runs, which at this point they expect her to do). This race begins the cycle as a Toss-up.

4th District
The 4th District, anchored in Iowa’s northwest corner, remains the state’s Republican bastion. In the new map, the 4th extends down the entire stretch of the Nebraska border to Missouri, having picked up Pottawattamie (Council Bluffs), Mills, and Fremont counties from the 3rd District. The new 4th also shed some of its eastern counties to the new 2nd District.

Trump would have carried the new 4th by 20 points, 59-39 percent. That’s down slightly from the old district, which the former president carried by 26 points, 63-37 percent. But that’s not a big enough shift for GOP Rep. Randy Feenstra to have any trouble securing a second term. Feenstra’s predecessor, Steve King, had some close elections but that was because he openly expressed support for white nationalism and was condemned as a racist by his own party’s campaign chairman. Feenstra doesn’t have that same baggage, so this race begins as Solid Republican.

This story first appeared in InsideElections.com on November 11, 2021.