Georgia Republicans are on their heels. After nearly two decades of dominating statewide politics, the GOP came within two points of losing the governorship for the first time in 16 years, failed to deliver the state’s electoral votes to the Republican candidate for president for the first time since 1992, and lost both of the state’s Senate seats.

And the GOP is also down two House seats, both rock solid Republican districts that moved rapidly toward Democrats over the last decade.

While the GOP-controlled legislature can’t stop the state’s march toward swing state status, they do have the power to shore up the party’s congressional prospects, and they did just that during this cycle’s decennial redistricting, by combining two Democratic-held districts and creating a new, open Republican-leaning seat.

While the state’s congressional delegation is currently eight Republicans and six Democrats, the new GOP-drawn congressional map will likely ensure at least a 9R-5D split next year, while forcing the two Democrats who flipped seats over the past decade into a battle royale. 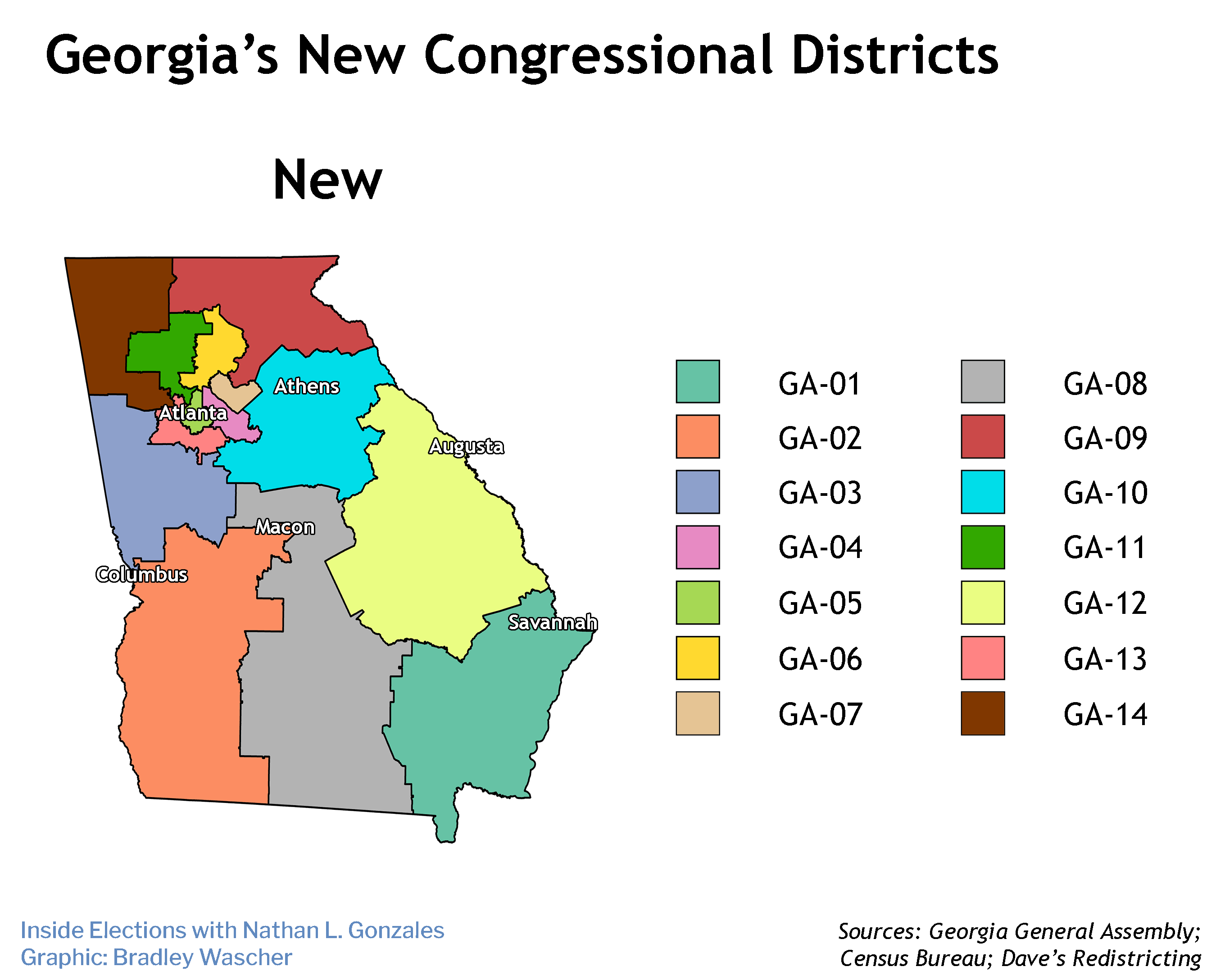 2nd District
Democrat Sanford Bishop’s southwest Georgia seat had to grow the most of any district in the state to meet its target population. It did so by expanding into Thomas County on the Florida border. The partisanship of the district is largely unchanged: Joe Biden would have won here, 55-44 percent. Army veteran Jeremy Hunt is running as a Republican and has endorsements from Sens. Josh Hawley and Tom Cotton but the district’s Democratic lean means he’ll start as a serious underdog even in a favorable national environment. Solid Democratic.

4th District
Democrat Hank Johnson’s 4th District is still situated in the eastern Atlanta suburbs but shed its Gwinnett County portion and now extends all the way to the northern tip of DeKalb County, picking up heavily Democratic territory that was previously part of the 6th District. The district’s partisanship is unchanged, however, and Biden would have won it, 78-21 percent. Solid Democratic. 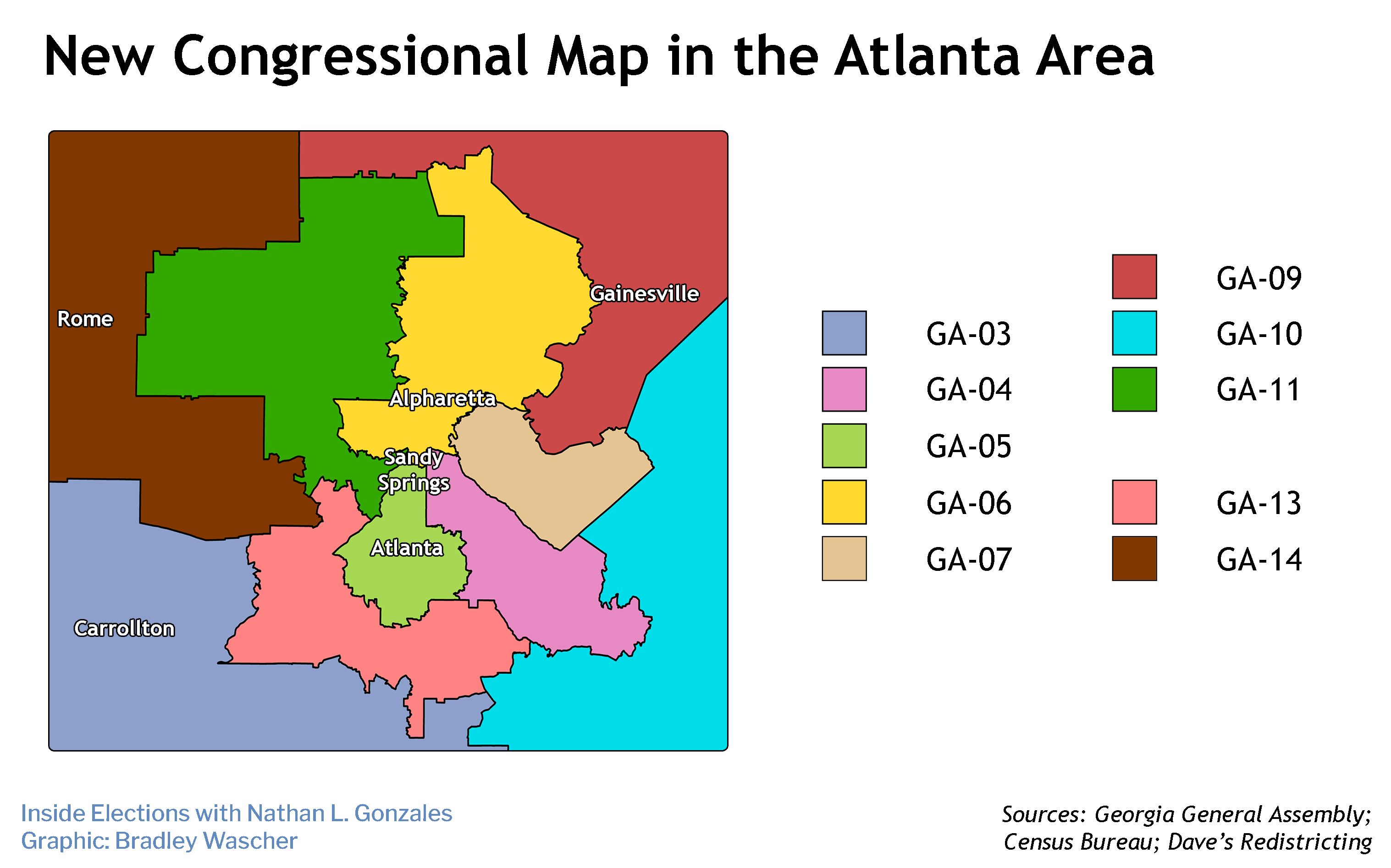 6th District
The 6th District was one of two longtime GOP strongholds in the Atlanta suburbs that Democrats flipped in the last four years. Under the old map, the 6th consisted of the northern half of Fulton County (Atlanta), eastern Cobb County, and northern DeKalb county. Biden carried it by 11 points.

Under the new map, the 6th still encompasses most of northern Fulton County and eastern Cobb County, but extends north to pick up all of heavily Republican Forsyth and Dawson counties, and the eastern half of heavily Republican Cherokee County. As a result, under the new lines, Trump would have carried the 6th District by 15 points, 57-42 percent.

While that’s still a serious shift from 2016, when Trump would have won the new 6th, 61-34 percent, it puts the new district out of reach for any Democrat, especially in a midterm with an unfavorable political environment.

Georgia has a runoff rule for primaries, so if no candidate receives a majority of the vote, the top two vote-getters advance to a runoff. Likely Republican.

Because the 6th District is now out of reach for a Democrat, McBath has chosen to leave that district and run in the 7th instead. But 7th District Rep. Carolyn Bourdeaux, also a Democrat, isn’t going anywhere, setting up a clash in the May 24 primary.

McBath has been in Congress for slightly longer, and had already built a national profile as a gun control advocate even before she got to DC. Bourdeaux represents significantly more of the district than McBath does. Both have been advertising in the Atlanta media market since 2018 (Bourdeaux ran unsuccessfully for the 7th District that cycle).

And both entered 2022 with similar war chests: $2.4 million for McBath, $2 million for Bourdeaux. The limited public polling suggests McBath begins with a slight edge, but there’s a lot of game left to be played. Complicating things further is the presence of a third candidate, state Rep. Donna McLeod. Because of Georgia’s runoff rules, in a close race McLeod’s presence could keep both Bourdeaux and McBath under 50 percent and force them into overtime. Whoever wins, this district is Solid Democratic.

9th District
The 9th District remains anchored in the northeast corner of the state. But it took some Democratic-leaning Gwinnett territory from the old 7th District and shed deeply Republican Dawson and Forsyth counties to the new 6th District. About one-third of the population is new to the district.

As a result, it’s more Democratic than before. The new 9th would have voted for Trump, 68-30 percent, compared to 76-22 percent under the old lines.

But it’s still so Republican that freshman GOP Rep. Andrew Clyde, who drew widespread ire when he said Jan. 6 insurrectionists looked like “tourists,” won’t have any trouble returning to Congress this year. Clyde’s home was actually drawn out of the new 9th District, but he’ll still run here this year. Solid Republican.

10th District
Republican 10th District Rep. Jody Hice is not running for re-election, and is instead challenging Georgia Secretary of State Brad Raffensperger in the GOP primary (with an endorsement from Trump, who hates Raffensperger for not helping him overturn Biden’s victory in Georgia).

That means the east-central Georgia 10th District, 70 percent of which is from the old 10th and 19 percent from the old 9th, is an open seat. Trump would have won here, 61-38 percent, meaning the GOP primary is the real contest.

The race is almost certainly going to a runoff, the winner of which will be assured a seat in Congress. Solid Republican.

11th District
Barry Loudermilk’s 11th District is left largely untouched in the northwestern Atlanta suburbs and exurbs. Trump would have won here, 57-42 percent. While that’s a 10-point leftward shift from how well Trump would have done here in 2016, it’s not enough to make Loudermilk vulnerable in the short term. Solid Republican.

12th District
The Augusta-anchored 12th District picked up some territory from the old 10th District but is otherwise unchanged. Trump would have won here, 55-44 percent. In a great year for Democrats, this district could conceivably be competitive. But 2022 is not shaping up to be a great year for Democrats. GOP Rep. Rick Allen’s only announced Democratic challenger is Elizabeth Johnson, the retired insurance agent Allen beat, 58-42 percent, in 2020. Solid Republican.

13th District
The danger for Democratic Rep. David Scott in this largely unchanged southwestern Atlanta suburbs district will come in the primary, not the general, as the district would have voted for Biden, 80-19 percent.

In the 2020 primary, Scott came unexpectedly close to being forced into a runoff with progressive former state Rep. Keisha Waites, winning just 53 percent of the vote.

This year, the Blue Dog and chairman of the Agriculture Committee faces a challenge from former state Sen. Vincent Fort, a progessive and favorite of Vermont Sen. Bernie Sanders. Scott had $1.1 million in the bank on Dec. 31 and won’t get caught by surprise. Solid Democratic.

14th District
While nearly all of bombastic Rep. Marjorie Taylor Greene’s 14th District was left unchanged, the northwest Georgia seat now extends into the Atlanta suburb of Cobb County, an addition that was enough to prompt Greene to deride the new map as a “fool’s errand,” and also incense the roughly 13,000 Democratic voters who suddenly have found themselves represented by the controversial freshman member.

Despite her long paper trail of racist, Islamophobic, and anti-Semitic statements and social media posts, which drew criticism from GOP leadership before her initial election, Greene’s penchant for confrontation and offensiveness has made her a favorite among conservative Republicans across the country, and Public Enemy #1 for many Democrats. She raised more than $8 million through the end of 2021, a massive sum for any House member, let alone a freshman with no committee assignments from a safe seat.

The two Democrats running against her, veteran Marcus Flowers and insurance agent Holly McCormack, have also raised serious sums: $4.6 million for Flowers and $1.3 million for McCormack. But neither stands a chance in a district Trump would have carried, 68-31 percent.

If Greene is beatable (and it’s not obvious she is), it would likely be in a GOP primary. Healthcare consultant Jennifer Strahan has received some coverage for her campaign as a “no-nonsense conservative” alternative to Greene, but had a paltry $60,000 in the bank on Dec. 31 compared to Greene’s $3.3 million. Solid Republican.

This story first appeared in Inside Elections with Nathan L. Gonzales on February 4, 2022.