Connecticut Redistricting: Testing the Edges of the Battlefield

In a sea of uncertainty, some things are easy to project, such as the redistricting process in Connecticut.

For the third time in as many redistricting cycles, Connecticut’s Supreme Court had to step in to draw new congressional maps after both the state legislature and a backup commission failed to reach an agreement.

Although Democrats are in full control of the Nutmeg State’s government, they do not have large enough majorities to pass a congressional map without GOP votes under state law.

Despite the drawn-out process, the map drawn by a court-appointed special master is a largely status quo update. Connecticut neither gained nor lost a congressional seat through apportionment, and population differences between the existing five districts were minimal.

Democrats have held all five seats in the delegation since 2008, and that should hold in 2022 despite significant headwinds in the national political environment. Republicans believe they can make at least one, if not two, seats competitive. 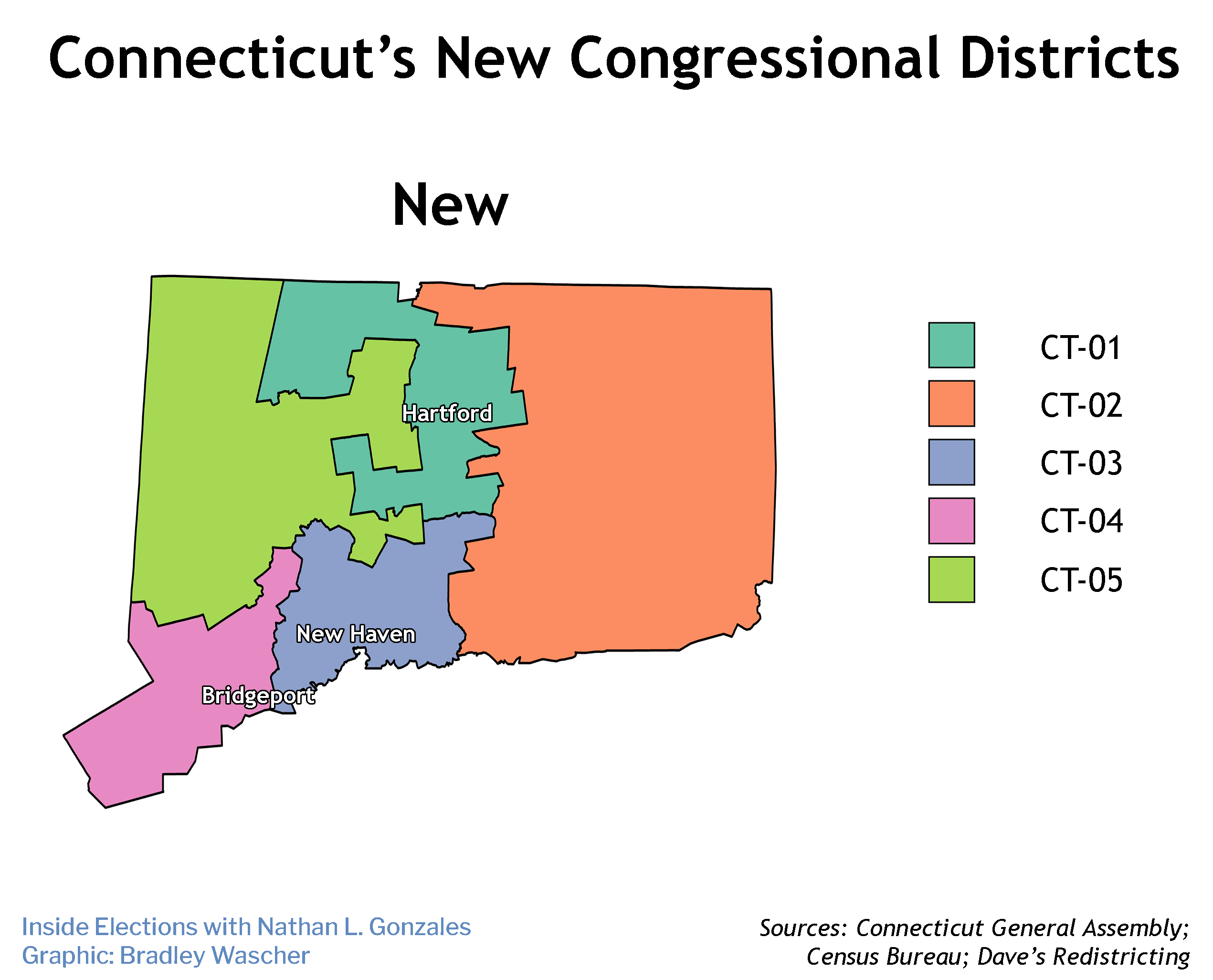 By partisanship, Joe Biden would have carried the district, 63-35 percent, so Rep. John Larson’s main concern is winning the Democratic primary. He faces 27-year-old Muad Hrezi, a former staffer for Sen. Chris Murphy who is waging a progressive campaign and supports Medicare for All and the Green New Deal.

Neither candidate is raising massive sums: Larson pulled in $230,000 in the first three months of 2022 and had $876,000 in the bank on March 31, while Hrezi raised $171,000 and had $192,000 in the bank. Larson won his first race for Congress 24 years ago, and Hrezi cites upset victories by Ayanna Pressley in Massachusetts and Alexandria Ocasio-Cortez in New York. But unlike those districts which had rapidly diversified, the 1st still has a 61 percent White voting age population. Insurance companies are a main employer as well, potentially blunting the appeal of Medicare for All, even among Democratic primary voters.

Larry Lazor, an OB/GYN from West Hartford, is running as a Republican. Initial Rating: Solid Democratic.

2nd District
The 2nd District spans the entire eastern half of the state, and picks up about 21,000 residents in Glastonbury from the 1st District but is otherwise unchanged.

For Democratic Rep. Joe Courtney, that means the general election could become competitive if the cycle gets bad enough for Democrats. But even then, he should be alright given the partisan lean of the district and his tendency to outperform the top of the ticket. Since his first win in 2006, when he ousted GOP Rep. Rob Simmons by just 83 votes, Courtney has never won by less than 21 points. The only declared GOP candidate this year is state Rep. Mike France, who had $116,000 in the bank on March 31 compared to Courtney’s $1.2 million. Solid Democratic.

3rd District
The map makes only minor adjustments to the New Haven-area 3rd District, subtracting the northern part of Middletown and tacking on the eastern half of Shelton.

Biden would have carried the new district, 59-40 percent. Powerful House Appropriations Committee chairwoman Rosa DeLauro will likely face Republican Hamden Councilwoman Lesley Denardis, and should return to Washington, DC without an issue — though she won’t be chairwoman in the next Congress if Democrats lose the majority. Solid Democratic.

4th District
The 4th still begins in the Panhandle and extends northeast to Oxford. As the old version was slightly overpopulated, the 4th shed the eastern half of Shelton to meet its target population but was otherwise unchanged.

The new 4th would have voted for Biden, 65-34 percent, so Democratic Rep. Jim Himes shouldn’t have any issue returning to Congress. Former Darien selectman Jayme Stevenson and ophthalmologist Michael Goldstein are running as Republicans. Solid Democratic.

5th District
The only change to the Northwest Hills 5th District was the subtraction of a few thousand residents in Torrington.

Incumbent Democrat Jahana Hayes — who in 2020 defeated assistant U.S. Attorney David Sullivan, 55-43 percent — had $1.6 million in the bank on March 31. Her likely opponent is George Logan, a moderate Republican former state senator and son of Guatemalan immigrants who plays in a Jimi Hendrix tribute band ($214,000 on March 31). Republicans are hoping this evolves into a serious race in a great cycle. Likely Democratic.

This story first appeared in InsideElections.com on April 20, 2022.